Before Amazon (NASDAQ:AMZN), Wal-Mart (NYSE:WMT) was a giant operating in a land of regular-sized foes. The company had rivals, but they lacked the scope to be much more than niche competitors.

The rise of the internet changed all that. Amazon made it so people could get low prices without leaving their homes. That dented Wal-Mart's business, but the brick-and-mortar chain has been fighting back. It has dramatically improved its online business by placing it under serial online entrepreneur Marc Lore. And while the $3.3 billion deal to buy Jet.com, which brought Lore to Wal-Mart, was pricey, the company secured the services of an executive who may help it pull ahead in the battle with Amazon.

While his success has been in the digital world, Lore has demonstrated that Wal-Mart has to leverage its physical presence to succeed. He has preached a customer-first strategy that's all about putting goods in customers' hands in the way they want them, and at the fastest possible speed. 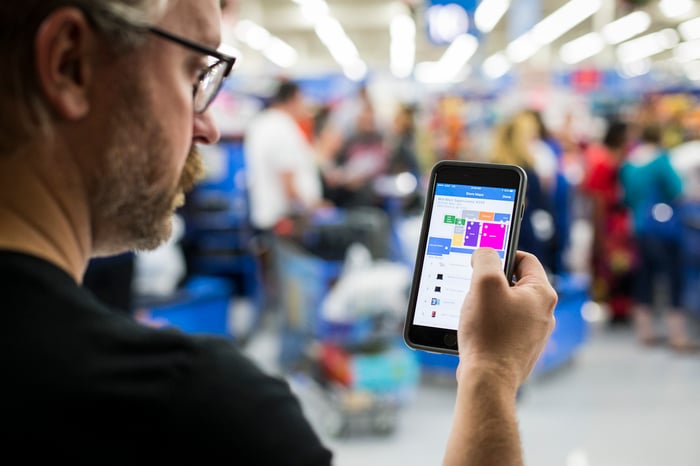 While Amazon has a deal in place to buy Whole Foods, that company's 400 or so U.S. stores give it a tiny footprint next to Wal-Mart's 5,000 domestic locations. Lore plans to leverage that advantage to help Wal-Mart gain market share, and he has enacted or tested a number of ways to take advantage of having physical stores.

First, in April, the company started offering a discount to customers who ordered items online that were not stocked in stores for in-store pickup. The plan was to roll this out to more than 1 million items.

Encouraging online ordering with in-store pickup has two effects for Wal-Mart: It gets customers to register with its website, which could lead to future digital orders, and it drives in-store traffic.

Lore and his team have also been working to improve the processes for how online ordering for in-store pickup works. That has included dedicating space and personnel to the process, but some higher-tech solutions are being tested, too.

What's next for in-store pickup?

Wal-Mart has improved its app to allow customers to let stores know when they are on their way, so orders can be ready when the consumer arrives. That's a smart addition that should lower shopper frustration, but it's only a start, according to Lore, when it comes to how the company will make picking up items in stores easier.

One of my personal favorites is our Pickup Tower. Much like a high-tech vending machine for your online orders, this feature in a few of our stores allows you to pick up items in less than a minute by scanning a bar code sent to your smartphone. The pilot phase has been so successful we're expanding it to other locations across the country.

The chain's digital CEO acknowledges that not every idea will work, but he promised to keep trying. "The only guarantee is that we'll let you tell us what works best," he wrote in a blog post.

A new day for Wal-Mart

In under a year, Lore has changed the game for Wal-Mart. He has taken a company that was physical first, and instead of making it digital first -- something that would ignore its chief edge over Amazon -- he has moved it toward being customer-first.

Lore has also injected start-up thinking into a very mature company. He's not afraid for an idea to fail. He even accepts that many will, but that experimenting is an important part of the process.

Much attention went to Wal-Mart offering free shipping for eligible orders over $35. That was an important move, but Lore has shown that it's just one step in a long process.