Shares of supermarket chain SUPERVALU Inc. (NYSE:SVU) were tumbling last month as investors reacted to the news that Amazon.com (NASDAQ:AMZN) would acquire Whole Foods Market, Inc. (NASDAQ:WFM).  According to data from S&P Global Market Intelligence, the stock finished down 15%. 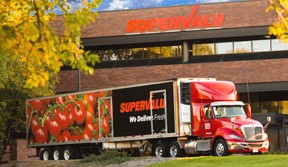 As the chart below shows, shares fell over June 15 and 16. 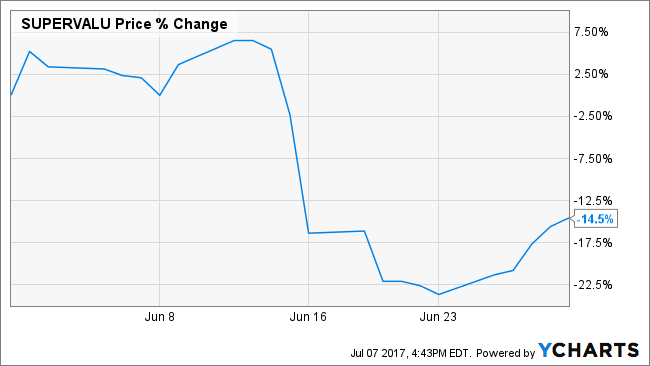 Supervalu shares first began falling on June 15 after peer Kroger (NYSE:KR) turned in a disappointing earnings report. The country's largest traditional supermarket company said comparable sales fell slightly, and it lowered its earnings guidance for the year. Supervalu stock fell 7% on that news, then dropped another 14% the following day as news of the Amazon-Whole Foods deal broke.

Supermarket stocks sold off broadly following the announcement as analysts expect Amazon to take share from entrenched grocery companies and to lower prices at Whole Foods, which could cramp margins across the industry. Supervalu is seen as one of the weaker operators in the supermarket industry as the company has had to sell a number of businesses to pay down debt, and comparable sales fell 5.8% in its most recent quarter.

Unlike most supermarket companies, Supervalu also has a wholesale business, supplying independent grocery stores. The wholesale segment now makes up more than 60% of the company's revenue as it has pivoted to that category by selling off Save-A-Lot and recently acquiring Unified Grocers.

Its diversification into the wholesale business should offer the company some protection from Amazon as it won't be competing with it at the retail level. However, Amazon could pressure some of those retail customers out of business depending on what it does once it takes over Whole Foods.

Supervalu stock has since rebounded from the depth of the losses, as did its peers, but investors should keep an eye on Amazon's strategy once it takes over Whole Foods.