Wal-Mart (NYSE:WMT) revolutionized the retail industry with its emphasis on low prices, and its actions had a huge competitive impact on smaller local retailers that have since struggled to survive. Now, though, Wal-Mart is the one facing tough competition, this time from internet retailers who don't have the extensive store network and its attendant costs that Wal-Mart has to pay. Dividend investors are happy with Wal-Mart because of its long track record of regular dividend increases, but they want to be sure that the retail giant doesn't do anything to endanger the sustainability of its quarterly payouts in the future.

Wal-Mart has done a good job of rewarding shareholders by increasing its dividend steadily over time. The big-box retailer's increases haven't always been huge, but they've been consistent, and only a few dozen companies can boast longer streaks of raising dividends every year than Wal-Mart.

Yet the pace of Wal-Mart's dividend growth has slowed recently. During the 1980s and 1990s, Wal-Mart's quarterly payouts climbed at a healthy pace that often included double-digit percentage increases. That growth pace only accelerated in the 2000s, with a couple years in which dividends rose by 30% to 40%. Yet since a nearly 20% increase in 2013, Wal-Mart has given shareholders only $0.01 quarterly dividend increases, slowing dividend growth to just 2% per year. 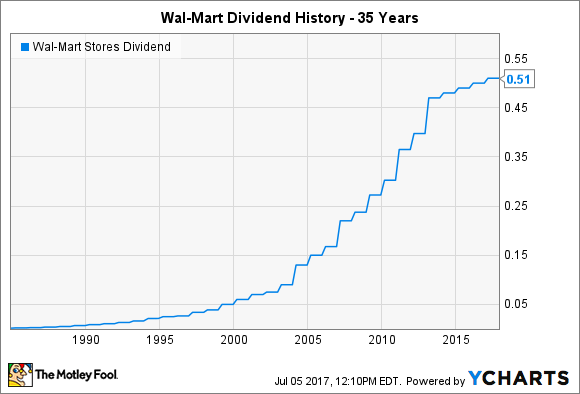 What's ahead for Wal-Mart's dividend?

There shouldn't be any immediate concerns among investors about Wal-Mart's ability to keep paying its dividend. The retailer has a payout ratio of less than 50%, and that should give the company ample opportunity to keep making the minimal increases it has used in recent years to keep its dividend-increase streak alive. That's roughly in line with what some of its retail peers pay, and it gives Wal-Mart breathing room in considering future capital allocation decisions.

The bigger question for Wal-Mart is whether it can keep moving forward in the long run. The big-box giant reeled after the biggest internet retailer decided to make a big push into the brick-and-mortar grocery space. Wal-Mart has used its grocery supercenter store offerings to pull more customers into its stores on a regular basis, where they'll typically do additional shopping for non-grocery items at the same time. Any threat to its grocery stores would pose a larger problem for Wal-Mart, and signs of a price war could hurt profits at a time when the retailer would prefer to get growth from the segment. 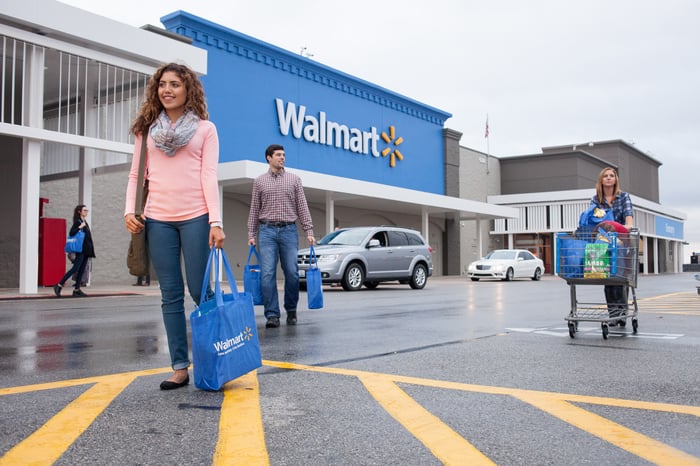 Wal-Mart is doing its best to fight fire with fire. E-commerce sales for the company jumped 63% in the first quarter of its new fiscal year, and that helped pull overall revenue up slightly. With such an extensive store base, Wal-Mart hopes to use its local locations as distribution centers, offering local delivery and store pickup options to customers who need items as quickly as possible.

Wal-Mart is likely to keep its dividend growth to a token amount for the next several years as it works on its overall strategic vision for a changing retail world. With current yields at reasonably attractive levels, dividend investors have to decide whether they believe Wal-Mart can evolve along with the retail industry. In the long run, Wal-Mart's dividend payments will rely on its resourcefulness going forward.