As the retail landscape becomes increasingly unclear, investors are pricing in lower odds that Signet Jewelers (NYSE:SIG), Barnes & Noble (NYSE:BKS), and Kroger (NYSE:KR) can shake off growing threats to their brick-and-mortar-based businesses.

Shares of each company are down more than 30% this year. Here's why.

Signet Jewelers is a subprime lender masquerading as a jewelry store. Bears argue that its mall jewelry brands -- Kay, Zales, Jared, and others -- have driven sales growth by selling more product on credit, extending loans to customers to entice larger purchases that its customers might not otherwise be able to afford.

Customers typically receive 12 months of 0% interest financing on their purchases after making a 20% down payment. Larger purchases can receive longer repayment periods, while some of its stores also offer credit cards with the typical sky-high store card interest rates attached. These financing offers are important for driving sales, as the company financed nearly 61% of its sales in its most recent quarter.

Shareholders are naturally skeptical of businesses that provide financing to move product off the shelves. Profits are booked immediately on the sale of goods, but losses from bad loans may not show up for months or years. It's especially questionable when the company has seemingly no advantage in making loans to its customers. Signet isn't a bank, and it doesn't take deposits, and thus its funding costs are far higher than are those of true pure-play lenders. Furthermore, more than 20% of loans were past due as of its most recent quarterly filing, casting doubt on the true quality of its book.

Earlier this year, Signet announced its intention to sell $1 billion of its $1.8 billion loan portfolio to Alliance Data Systems, a specialty store cards issuer, which suggested that fears over credit quality may be overblown. But the loans it will sell are purported to be "prime" accounts, not the subprime accounts that expose it to higher loan losses. The subprime book will say on its balance sheet, managed by a third party, Genesis Financial Solutions.

The two biggest questions for Signet Jewelers are these:

Shares trade at about 9 times 2018 earnings guidance, a valuation that reflects the uncertainty of future loan losses and the pace of sales if it turns over its book of loans to third-parties. 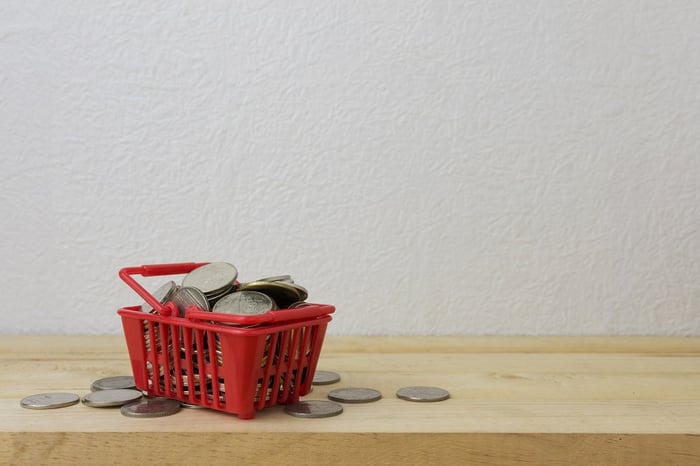 Investors have marked these stocks for the bargain bin, but discounts reflect underlying problems with their businesses. Image source: Getty Images.

A brick-and-mortar book store that was left behind

Increasingly, shareholders are coming to terms with the fact that the retailer may be too far behind the times to ever catch up. Its retail business produced $90.6 million in operating profit in the most recent fiscal year, while the Nook-related segment generated operating losses of $36.4 million. Recent reports suggest Barnes & Noble will move the Nook to the back of its stores, prioritizing the sale of physical books over e-readers and associated digital book sales.

The question is just how long Barnes & Noble can maintain its profits in retail by slashing stores and their associated expenses. Notably, same-store sales declined by more than 6% in the most recent year, as more book sales move online and to other retailers.

Barnes & Noble has all the traits of a dying retail brand. But unlike many struggling retail companies, it doesn't have an obvious trigger event that will lead to an immediate demise. Long-term debt stands at a manageable $65 million, and more than half of its operating leases will come up for renewal in less than three years, allowing it to negotiate favorable leases or simply shutter unprofitable stores. Gift card balances, which provide the company with more than $350 million of interest-free financing, have been remarkably stable despite a decline in sales, but any decrease would stand to drain cash from its balance sheet.

The question is just how profitable Barnes & Noble could be without the weight of Nook losses and underperforming stores in its portfolio. Even after a 30% haircut this year, shares currently trade for about 10 times fiscal 2017 operating profit, a seemingly high valuation that, in my view, reflects investor optimism that an end to Nook-related losses would generate an immediate and substantial increase in profits.

A grocery growth story comes to an end

Shares of Kroger have been battered by evidence that the grocery business is certain to become more competitive. On the low end, Aldi threatens margins with its no-frills stores that grab share by offering deeply discounted prices on a limited selection of consumer basics -- produce, dairy, and packaged goods. On the higher end, Whole Foods Market's tie-up with Amazon.com could lead to more price competition across the entire grocery spectrum.

To say that grocery is competitive would be an understatement. Kroger's operating profit margin has only twice topped 3% in the past five years, most recently in 2016 and 2017. Thus, even modest price competition (1% price cuts, on average) can easily wipe away a third or more of operating income if grocers use lower prices to win customers.

Kroger may not thrive as the country's largest traditional grocer, but there is ample reason to believe it's a survivor in a rapidly changing landscape. The company's private-label brands account for approximately 26% of its sales, evidence that consumers trust the quality of what Kroger puts on the shelves. In addition, having control of its own brands theoretically gives it more room to manage price points as competitive pressures intensify.

Shares now trade at about 13 times its midpoint EPS guidance for 2017, down from a high-teens multiple that shares traded for during much of 2015. Investors are simply struggling to handicap what a more competitive environment means for America's largest grocer.