Please ensure Javascript is enabled for purposes of website accessibility
Log In Help Join The Motley Fool
Free Article Join Over 1 Million Premium Members And Get More In-Depth Stock Guidance and Research
By Rich Duprey - Jul 8, 2017 at 9:31AM

We've seen this play before and the ending isn't pretty.

Harley-Davidson (HOG 1.32%) apparently learned nothing from its failed purchase of MV Augusta in 2005. Having gone down the road of buying a foreign sports-bike maker once before -- and quickly turning tail and abandoning the venture -- rumors persist that Harley is interested in making a bid for Ducati.

Although it's hard to believe the American motorcycle king would want to make the same mistake again, let's look at what it could possibly gain -- and lose -- if it goes through with an offer.

A luxury, not a necessity

Ducati is Volkswagen's (VWAGY -0.25%) prestige motorcycle brand that's owned by Audi. Although currently profitable, it became expendable after the carmaker got embroiled in an emissions cheating scandal for which it needs to come up with money to pay the tens of billions in fines its faces. As part of Volkswagen's non-core operations and the pet project of its former chairman, dumping Ducati becomes infinitely easier.

Yet focusing on core operations is also something Harley-Davidson is doing. Having tried the sports-bike thing not only with MV Augusta but also Buell, another line of sports bikes it eventually got rid of, Harley has chosen to remain fairly single-minded since the recession in its pursuit of its big-bore bikes. A Ducati purchase would amount to a significant divergence from that path.

Last year, Ducati sold all of 55,451 motorcycles, up 1.2% from the prior year, but only a few more than what Harley-Davidson sold worldwide in the just the first quarter of 2017. Buying the sports-bike maker wouldn't add as much to Harley's business as many seem to believe. 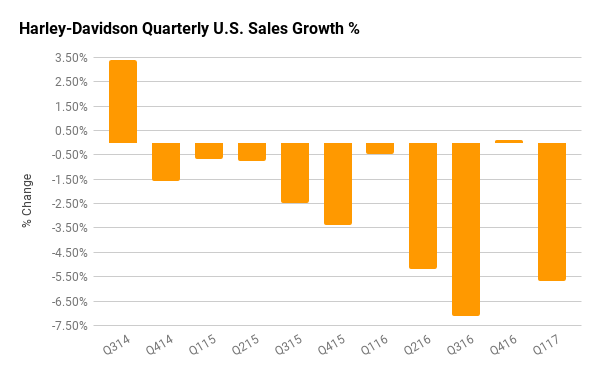 Moreover, the sports-bike market is in a slump every bit as bad as, if not worse than, what's being experienced in the big-bike market. According to Powersports Business, sports-bike sales fell 4.7% last year, worse than the 3.9% decline Harley experienced in the U.S. and the 1.9% slump it felt worldwide. That means Harley would be entering into a market weaker than its own in a bid to counter its own stalling sales.

Ducati comes with a premium price, too

The rumored selling price of $1.67 billion would also make it a very expensive purchase, not least because one of Ducati's biggest sellers is the Scrambler, an ode to oval flat-track racing, but also a bike with decent on-road performance. However, it's not exactly the type of bike in Harley's styling wheelhouse, and while the Scrambler accounted for 28% of Ducati's sales last year, or some 15,500 bikes, it would also put it in competition with Harley's own Sportsters and Street models that it's using to target the industry's new rider demographic. The Scrambler may have an appeal to younger, more urban riders, but it might also cannibalize sales of Harley's own bikes.

Even so, there could be other potential problems for sales, as its newest model, the Sixty2, which Ducati credits with bolstering Scrambler sales, would run afoul of new tariffs the Office of the U.S. Trade Representative wants to impose in retaliation for European import limits on American beef. The trade rep wants to impose 100% tariffs on motorcycles with engines of 50 cubic centimeters to 500 cubic centimeters (the Scrambler Sixty2 has a 399 cc engine).

That would add to Harley-Davidson's tariff woes, as it is having to build a plant in Thailand to get around the country's 60% tariffs on bike imports. If it buys Ducati, it's going to have similar problems here at home with one of the more popular models. 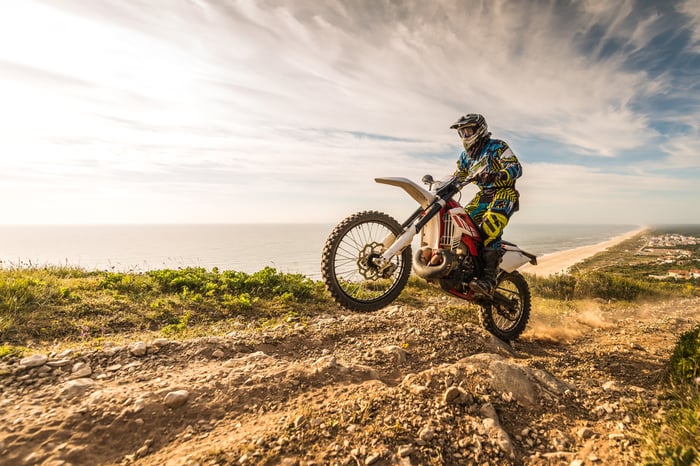 Getting to the root of Harley's woes

Rather than dropping a billion dollars or more on an Italian sports-bike maker that offers limited production capabilities and works at cross purposes to its efforts, Harley-Davidson could probably do much better for itself by buying a dirt-bike manufacturer like ATK Motorcycles, which could be picked up for a fraction of what it would spend on Ducati.

Dirt bikes are where many bike riders get their first taste for two-wheeling, and who, as they get older, graduate to street bikes. One of the things Harley says it's committed to doing is to growing the industry and the number of riders, and certainly looking at a market where many young riders are just starting out could be one of the best places to start.

It's still not certain Harley-Davidson is even considering making a bid, all the rumor-mongering aside. Negotiations are reportedly only in the very earliest stages and it's also tried this experiment before and failed. Why it would want to retrace its steps and at significant cost is a mystery. Ultimately, this may be the stuff of fanciful thinking, and Harley realizes it has much more to lose than gain by traveling down this road again.