The two public Hadoop distribution companies face off in a battle for a very big market.

Here at the Fool, we aim to find Amazon-like growth potential. One of the best places to look for market-beating growth is in emerging technologies such as Hadoop.

Hadoop is a Java-based architecture that allows for the storage and fast processing of massive amounts of data -- amounts that would overwhelm traditional solutions. It sits at the nexus of two emerging trends: Big Data and open-source software.

The two public pure-plays are Hortonworks and newly public Cloudera. Which is the better buy today? 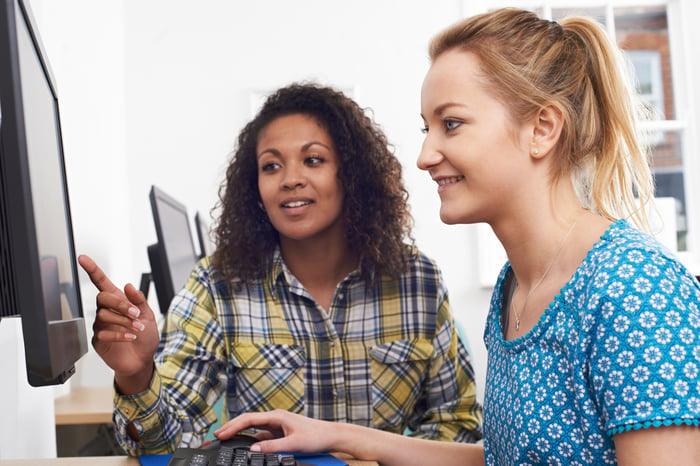 The technology behind Hadoop is open-source, which means it's free for developers to use and modify. That may seem anathema to, you know, making money, but there are ways.

Hortonworks and Cloudera each have distinct business models. Hortonworks delivers Hadoop technology programs for free, and charges for support, education, and professional services. Its offering has traditionally been geared toward data scientists.

Cloudera, on the other hand, writes proprietary software on top of Hadoop for enterprise-specific applications, more like traditional enterprise software.

Both companies, however, are venturing onto the other's turf. IBM (IBM 0.47%) recently folded its Hadoop offering, BigInsights, and will now distribute its analytics and data science software on top of Hortonworks' Data Platform in a more "packaged" offering for enterprise.  Hortonworks has a similar partnership with Microsoft's (NASDAQ: MSFT) Azure called HDInsight, and recently licensed a specialized version of HDP to Amazon, even though Amazon also has its own Hadoop distribution called Elastic MapReduce.

Cloudera, in contrast, is becoming a bit more open, with its new Data Science Workbench, which allows data scientists to create Hadoop applications in their preferred programming language (not necessarily Java). Cloudera also has a new platform-as-a-service offering called Altus.

Which model is better? It's a tough call, but I'm giving this one to Hortonworks. Having Amazon, Microsoft, and IBM license your offering to their vast customer bases seems much easier than competing against them, as Cloudera does.

It's certainly a close race, but Cloudera seems to be growing a bit faster than Hortonworks.

Of course, revenue isn't the whole story. Both companies are in hyper-growth mode and losing tons of money in the process. Here's how each company stacks up on margins and cash burn.

Both companies are posting similar improving gross margins, showing leverage in their business models. However, both are also losing lots of money as they invest heavily in sales and R&D. Operating cash isn't quite as bad, and positive for Cloudera, but this race is resource-intensive. Cloudera, fresh off its IPO, has a much bigger cash cushion, so it wins this round.

Herein lies the biggest difference so far -- Cloudera is over 60% more expensive than Hortonworks on an EV-to-sales basis.

Moreover, Hortonworks' recent partnership with IBM on June 13 could be a catalyst to expand the company's addressable market and is not yet reflected in its results. As such, Hortonworks is my pick.