Boeing (BA -5.07%) has been lobbying the U.S. government to fill a "fighter gap" in naval aviation -- the difference between the number of fighter jets needed to fully equip all of the country's aircraft carriers and the number of operational warplanes it actually has. This fighter gap has been growing for years, and been exacerbated by delays in production of new "carrier-variant" F-35C stealth fighter jets from Lockheed Martin (LMT -0.34%).

But the fighter gap should soon begin closing. 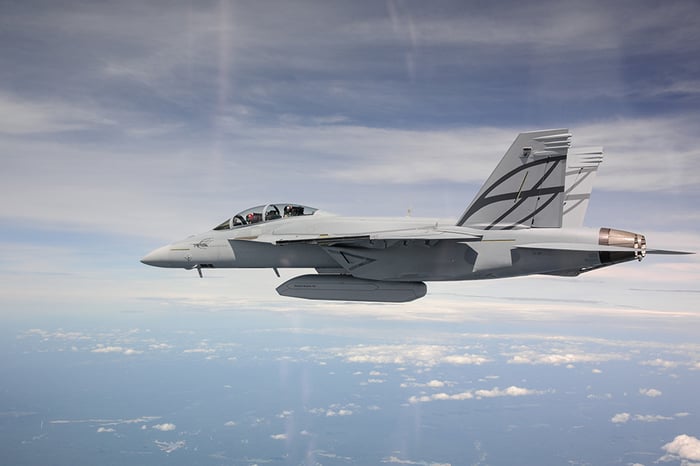 We know this because, just last month, Aviation Week reported that the Navy has green-lighted a plan floated by Boeing to shore up the Navy's fighter fleet with new "Advanced Super Hornet" fighter jets.

Also known as the "F/A-18XT" and "Block 3 Super Hornet," Boeing's Advanced Super Hornet is an upgrade of the company's current F/A-18E/F fighter jets. Among other improvements, the new design features "advanced network architecture" and "advanced cockpit displays" on the inside, and conformal fuel tanks -- adding 100 to 120 nautical miles to the plane's range, and providing a stealthier radar profile -- on the outside. The new design is not as stealthy as a Lockheed Martin F-35C. But at a mooted price of $79 million, the Advanced Super Hornet is also a heckuvalot cheaper than the $122 million price tag that Lockheed hangs on an F-35C.

Citing a "detailed blueprint" obtained from the U.S. Navy, Aviation Week reports that the Navy is planning to invest roughly $265 million upgrading F/A-18s to Boeing's new design between 2019 and 2022. And this could be only a down payment on further spending. AW's read is that the Navy's decision means that "Boeing's Super Hornet line has a future beyond the 2020s."

Boeing expects to have the Advanced Super Hornet design ready for action by 2019 (perhaps not coincidentally, the same year in which Boeing's archrival Lockheed Martin hopes to achieve initial operational capability for the F-35C). Logically, this means that by 2019, the Navy will be able to make informed choices between buying pricier fifth-generation F-35Cs or buying cheaper F/A-18s equipped with Boeing's new upgrades. It also opens the possibility to the Navy ordering upgrades on its existing F/A-18 fleet, which currently number 545 aircraft (and only two F-35Cs), according to data from FlightGlobal.

Even if it costs no more than the $9 million price differential between a current model F/A-18 and an Advanced Super Hornet to upgrade the former into the latter, that's a $4.9 billion revenue opportunity for Boeing.

The upshot for investors: The Navy is funding upgraded F/A-18s to the tune of only $265 million today, which probably doesn't sound like a lot relative to Boeing's $93 billion annual revenue stream. If the Navy likes what it sees once those upgrades start rolling out, though, this could turn into a really big deal for Boeing.