Shares of Activision Blizzard Inc. (NASDAQ:ATVI) have climbed 59.4% so far in 2017, according to data from S&P Global Market Intelligence, following a pair of impressive quarterly reports from the video-game giant.

Activision Blizzard's first big move came in February, when shares jumped nearly 19% in a single day after the company trounced expectations with its stellar fourth-quarter 2017 results. More specifically, Activision's revenue grew 48.9% year over year to $2.014 billion, and translated to 160% growth in earnings per share to $0.65. Both figures easily outpaced Activision's guidance at the time, which called for revenue of just $1.856 billion and earnings of $0.40 per share.

Management credited the company's success in part to the launch of Blizzard's Overwatch, which became the fast-ever game to reach 25 million players, as well as early tests of mobile advertising efforts at its King Digital business. 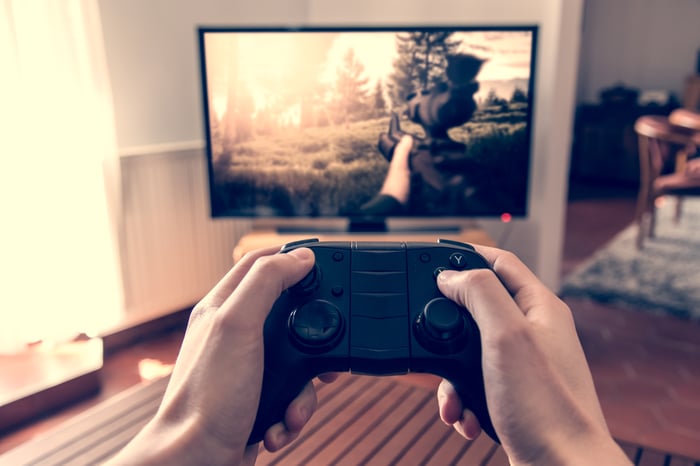 Then in early May, Activision easily beat expectations once again with its first-quarter 2017 results. Quarterly revenue climbed 18.6%, to $1.726 billion, while adjusted earnings rose 41.2%, to $0.72 per share -- and both represented new quarterly records for the company. Here again, Activision pointed to catalysts at Blizzard, where revenue climbed 50% to $441 million with the help of strong showings from both Overwatch and World of Warcraft. The former surpassed 30 million players last quarter and became the company's eighth $1 billion-dollar franchise, and both helped drive a more than 25% increase in Blizzard's revenue from in-game content.

And Activision won't be hitting the brakes anytime soon. Management spent much of the most recent conference call discussing plans to push forward in-game advertising on a broader basis. That's also not to mention the long-term promise of e-sports -- an industry with massive potential, considering hundreds of millions of people already watch e-sports and play Activision's enviable slate of games.

All things considered, it's clear Activision is having a banner year. With no shortage of opportunities to extend its success, it's no surprise to see shares trading near all-time highs right now.

Why Activision Blizzard, Inc. Stock Has Skyrocketed 59.4% So Far in 2017 @themotleyfool #stocks $ATVI Next Article
Current