Please ensure Javascript is enabled for purposes of website accessibility
Log In Help Join The Motley Fool
Free Article Join Over 1 Million Premium Members And Get More In-Depth Stock Guidance and Research
By Daniel B. Kline - Updated Jul 9, 2017 at 5:27PM

The company has moved past its failed merger attempt with Staples.

Office Depot (ODP 3.17%) has made progress in its mission to recast its business to be competitive in the internet era.

The company still has a long way to go, and its sales sank over the first six months of the calendar year. Despite that, investors seem happy with new CEO Gerry Smith and the fact that the company may be shrinking, but its profitability trend has moved in the right direction. 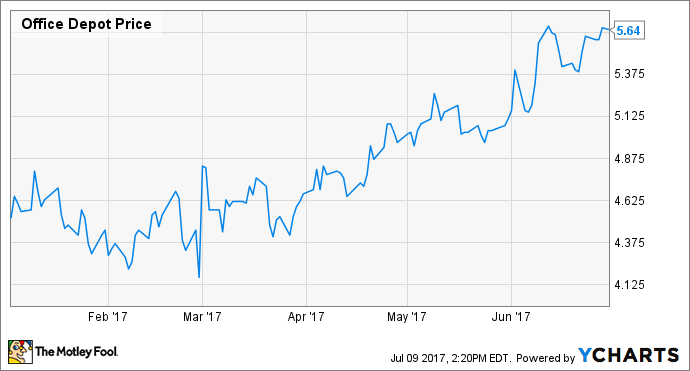 After closing 2016 at $4.52, shares in Office Depot rose to $5.64 at market close on June 30. That's a gain of $1.12 through the first half of the year, or just under 25%, according to data from S&P Global Market Intelligence. That's a major change from the first six months of 2016, when shares in the company fell by 44% because its merger attempt with rival Staples (SPLS) failed. 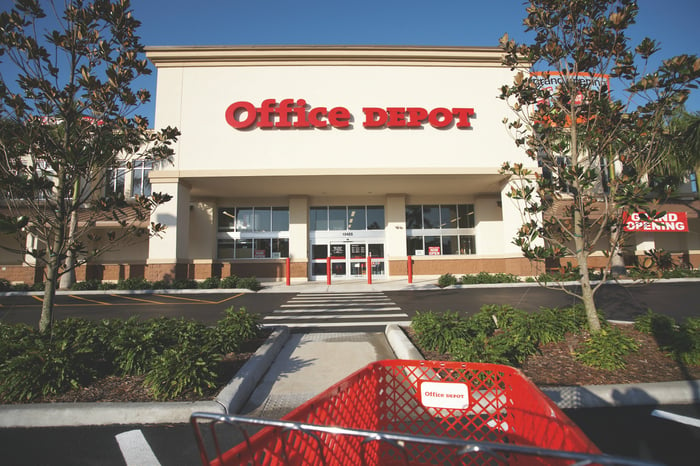 In March, Office Depot reported Q4 results including net income from continuing operations of $55 million, or $0.10 per diluted share. That number benefited by $15 million from an extra week in the quarter, but even factoring that out, $40 million would be an improvement over Q4 2015, where net income from continuing operations was $31 million, or $0.06 per diluted share.

"I am very pleased that we continued our positive momentum into the new year and delivered a strong earnings performance in the first quarter," said Smith, who noted that the company has sold it South Kore business while entering a deal to divest itself of operations in Australia and New Zealand. "Going forward, our focus is on executing against our strategic initiatives to grow the North American business."

Office Depot has somewhat stabilized its business and slightly improved its profit picture, but sales are still moving in the wrong direction. The company probably has too large a retail footprint, and its efforts to improve its digital business remain a major question mark. In addition, the company still faces a major unknown as Staples, its failed merger partner, recently made a deal to go private.

The first six months of the year show that the market likes the direction Office Depot has moved in. But the company has to show that at some point sales will stop falling, or else it will give back these gains.