The luxury lifestyle brand dropped after a pair of tough quarters.

Shares of Michael Kors Holdings Limited (CPRI 3.56%) have fallen 16.2% so far in 2017, according to data from S&P Global Market Intelligence, following a pair of disappointing quarterly reports from the fashion apparel and accessories specialist.

Michael Kors' first big plunge of the calendar year came in early February, when shares dropped more than 10% in a single day after the company delivered mixed results for the important holiday quarter. Quarterly revenue declined 3.2%, to $1.35 billion, slightly weaker than the market had anticipated, as contributions from 193 net new retail stores opened over the prior year only partially offset a 6.9% decline in comparable-store sales and an 18% drop in wholesale revenue.

Worse yet, Michael Kors CEO John Idol predicted that the spring season wouldn't be any prettier, with continued headwinds in shopping mall traffic trends, currency fluctuations and geopolitical strife in key international markets, and the company's strategic focus on reducing promotions to elevate its brand in North America. 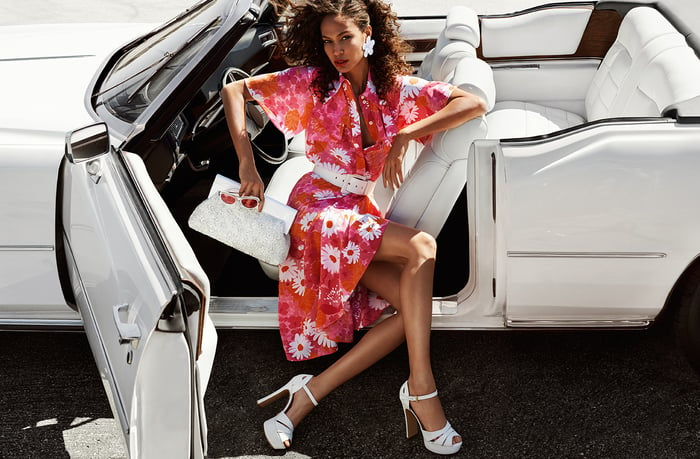 Then in late May, Michael Kors easily jumped over the low bar set by guidance provided three months earlier. Revenue for its fiscal fourth quarter declined 11.2%, or slightly less than expected, to $1.06 billion, while earnings per share fell 28.4% to $0.72, or $0.03 per share above Wall Street's predictions.

However, Michael Kors overshadowed its less-bad performance by simultaneously offering even more disappointing guidance for current-quarter revenue of $910 million to $930 million, below consensus estimates for $944 million, and adjusted earnings per share between $0.60 and $0.64, below estimates for $0.80 per share. Shares plunged another 10% the following day as investors absorbed the news.

What's more, Michael Kors announced plans to close between 100 and 125 locations over the next two years -- a move that will mean incurring between $100 million and $125 million in one-time costs over that time but will pay off with $60 million in annualized savings. Idol also referred to fiscal 2018 as "a transition year in which we establish a new baseline before returning to long-term growth."

In the end, fiscal 2018 might well bring exactly the change Michael Kors needs to return to sustained, profitable growth. But in the meantime, it was no surprise to see Michael Kors stock plunging as the company navigated the end of a difficult fiscal year.