In an interview six years ago, not long after becoming CEO of Bank of America (NYSE:BAC), Brian Moynihan didn't mince words when it came to one of his top priorities. "We need to get back most of the shares we issued in the crisis that caused all the dilution," he told Fortune's Shawn Tully.

Moynihan was referring to the fact that from 2008 to 2012, Bank of America more than doubled its outstanding share count, taking it from 4.5 billion shares in early 2008 up to 11.6 billion shares on a fully diluted basis four years later. Some of the increase was related to its acquisition of Merrill Lynch in 2008, which expanded Bank of America's outstanding share count by 1.4 billion shares. But the majority stemmed from the bank's need to raise capital in order to absorb crisis-related losses, which ultimately added up to nearly $200 billion. 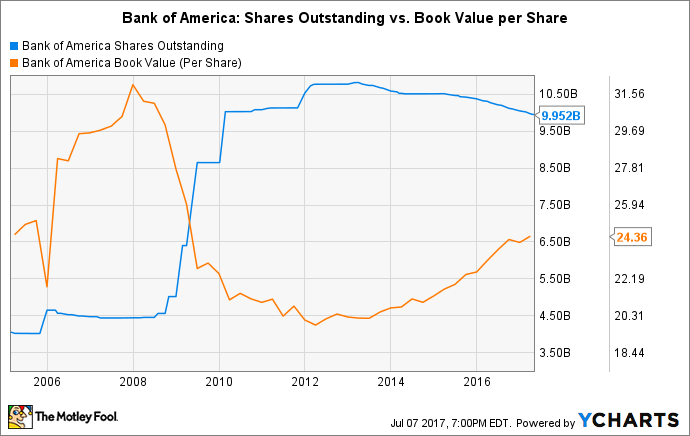 Issuing shares isn't necessarily a bad thing. After all, it's what enabled Bank of America to survive the crisis. But by doing so when its stock traded for less than half its book value per share, the North Carolina-based bank egregiously diluted the people who owned its stock.

The net result was that Bank of America's book value declined from $32 per share at the end of 2007 down to $20 a share four years later. And because a bank's share price is dictated in large part by its book value per share, the decision to dilute shareholders is the main reason that Bank of America's shares still, to this day, trade for significantly below their pre-crisis peak.

This is why Moynihan has been so set on reversing this dilution. As he explained at length in his latest shareholder letter:

In 2006, we earned the most in our history ($21 billion). We had 4.6 billion shares outstanding, meaning our diluted earnings per share was $4.58. We also paid a common stock dividend of $2.12 per share, or 46 percent of our earnings. Now, compare this to our 2016 results: earnings were $18 billion, but because we had more than twice as many shares outstanding, our EPS was $1.50 per diluted share, and our common stock dividend was $0.25 per share, or 17 percent of earnings.

The biggest difference between the two periods is the increase in common shares and a reduction in the dividend. Both were necessary to stabilize the company after the worst economic crisis since the Great Depression, and now that our company is stronger, we are focused on reducing the dilution and increasing the dividend.

Our shares outstanding, on a fully diluted basis, peaked at 11.6 billion. We issued more than 7 billion common shares during the crisis. We funded acquisitions, strengthened our balance sheet to meet higher capital requirements, and repaid the government's TARP investment within 13 months. We are working the share count down; at year end, we were at 11 billion shares. The good news for investors is that Bank of America is now in a position to start executing on Moynihan's goal. Following the conclusion of the second round of this year's stress tests in June, the bank said it will repurchase $12 billion worth of common stock over the next 12 months. That's more than twice the $5 billion repurchase authorization that it announced at this time last year.

At today's price, $12 billion will buy back approximately 486 million shares of common stock. Put another way, given Bank of America's current market capitalization of $246 billion, its share buybacks over the next year will equate to roughly 5% of the company's market value. If you extrapolate that into the future, it will take Bank of America a decade and a half to get back the shares it issued in the crisis.

It's a long row to hoe, to be sure, but it's in pursuit of a worthy goal.