Please ensure Javascript is enabled for purposes of website accessibility
Log In Help Join The Motley Fool
Free Article Join Over 1 Million Premium Members And Get More In-Depth Stock Guidance and Research
By Demitri Kalogeropoulos - Jul 10, 2017 at 10:16AM

Procter & Gamble (PG) has done a great job at simplifying its business lately. Its portfolio is down to just 65 core franchises from over 160, and executives made similar-sized cuts to P&G's production and supply chains.

In short, the consumer-products titan is much easier to manage today than it was a few years ago.

Getting a handle on P&G as a stock investment can still seem complicated, though. So, below, we'll look at the few essential business and financial statistics that describe this company. 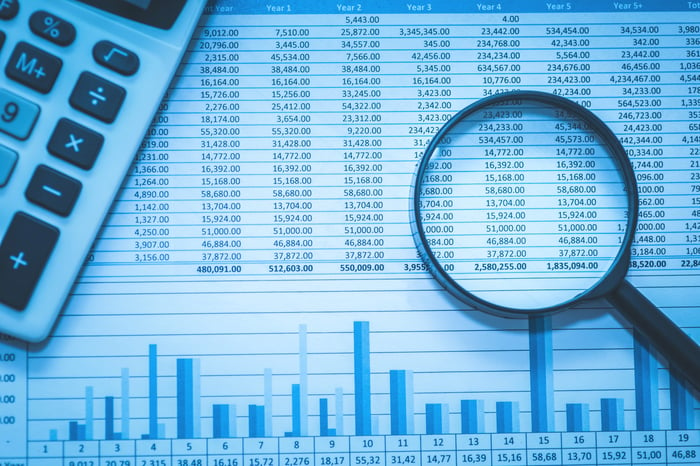 Organic sales growth is the foundation of P&G's business model. The company aims to expand at rates that beat rivals wherever it chooses to compete, and so this one statistic tells us a lot about P&G's operating momentum.

The company is on track to achieve its first acceleration of growth in years as organic gains climb to 2% in 2017 from 1% last year. That would be enough to keep P&G just ahead of Kimberly-Clark (KMB) but behind other peers like Unilever (UL). P&G had enjoyed organic growth of 3% in fiscal 2014 before an industry slowdown and spiking competition began hurting its core growth trend.

P&G owns several consumer brands that absolutely dominate their global markets, and the Gillette shaving franchise is a great example of that prized industry position. The brand accounts for 65% of the sales of blades and razors around the entire world. 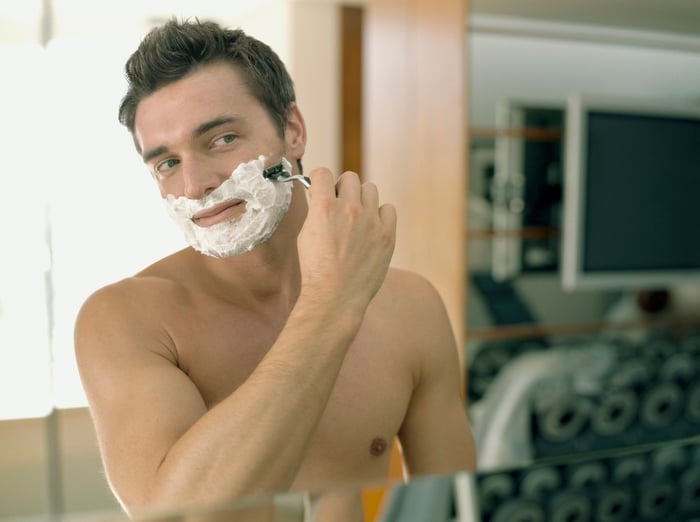 The franchise is facing aggressive competition, though, both from cheap in-store brands and from online rivals like Unilever's Dollar Shave Club. The challenges have taken a toll on the business; P&G's 65% market share is far from the 70% it enjoyed as recently as 2014.

The most direct benefit of P&G's cost-cutting initiatives over the past few years has been significantly higher profitability. In fact, the company generated $13.4 billion of operating income last year, down just 3.6% since 2014 despite the fact that sales have plunged by 12% over that time: 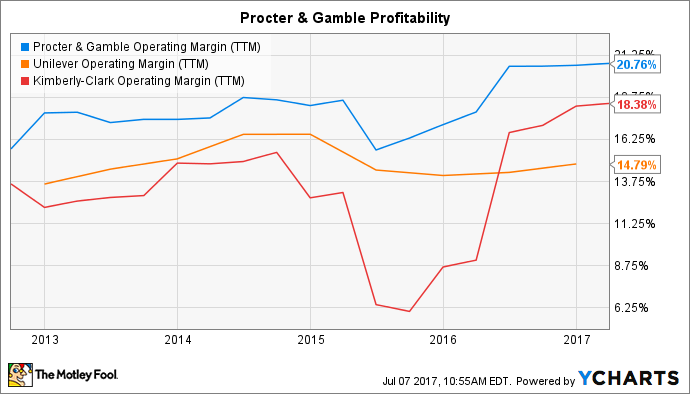 As a result, P&G boasts one of the industry's highest profit margins. Rivals are aiming to catch up with their own aggressive expense cuts, but they're unlikely to close the gap by much, given that the company still sees room to remove billions of dollars from its cost infrastructure over the next few years.

The dividend payout ratio has come down dramatically since peaking at over 100% of earnings in 2015. That statistic isn't very reliable, since it was artificially inflated in recent years due to the company's portfolio divestment program and sharp moves in foreign currencies. On the other hand, the payout ratio looks stronger than it really is today, thanks to P&G's one-time windfall from selling its beauty-product line: 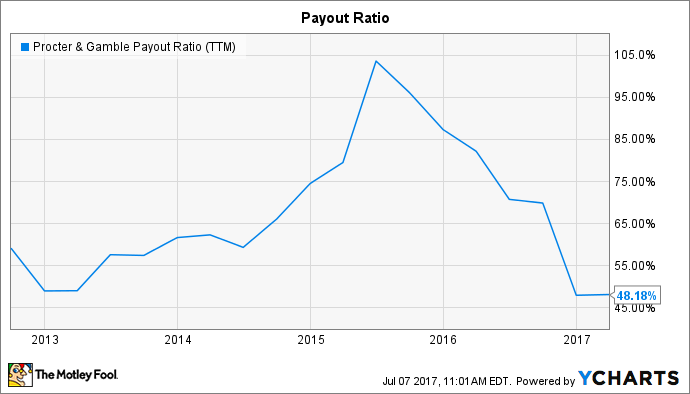 If we limit our focus to its current operations, Procter & Gamble's dividend amounts to about two-thirds of profits. That's relatively high, but still leaves room for the Dividend Aristocrat to continue boosting its payout.

P&G is one of the most efficient companies on the market at generating cash. Last year it outperformed its long-term goal of turning 90% of profits into free cash. It is on track to repeat that win in fiscal 2017.

This world-class financial strength provides ample resources that the company can use to reinvest in the business, or send to shareholders through its aggressive capital return program. The cash flow has helped keep the stock roughly in line with the broader market lately. But P&G likely won't return to its past market-thumping ways until it shows progress at reversing its stubborn two-year slide in market share.