Please ensure Javascript is enabled for purposes of website accessibility
Log In Help Join The Motley Fool
Free Article Join Over 1 Million Premium Members And Get More In-Depth Stock Guidance and Research
By Adam Levine-Weinberg - Jul 10, 2017 at 11:50AM

Spirit Airlines trades like a value stock, but the company has significant long-term earnings growth potential.

Most U.S. airlines have rallied to near all-time highs in 2017, buoyed by low fuel prices and an improving unit revenue environment. For example, Southwest Airlines (LUV -2.26%) stock ended last week at $64.24, up more than 80% since bottoming out last August.

Spirit Airlines (SAVE -0.47%) is a rare exception to this trend. While Spirit shares ended last week at $53.46 -- 44% above their 52-week low -- the stock had been trading around $60 before a dispute between management and Spirit's pilots caused a surge in flight cancelations in early May. Furthermore, Spirit Airlines stock remains far below its peak of about $85 (reached in late 2014). 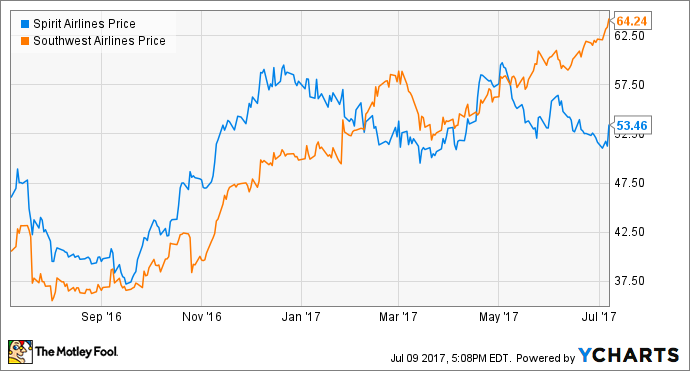 However, investors appear to have overreacted to the operational disruption caused by Spirit's pilot dispute, which has been (mostly) resolved. Spirit Airlines is set to return to strong earnings growth soon, which could help the stock rise to new heights in the next few years.

A blip on the radar

In late April, Spirit Airlines forecast that its revenue per available seat mile (RASM) would rise 4.5%-5.5% in the second quarter, powering a return to earnings growth. At that time, management expected non-fuel unit costs to rise 3.5%-4.5% in Q2 while economic fuel costs would reach $1.76/gallon, up from $1.47/gallon a year earlier.

The pilot dispute caused so much disruption in early May that Spirit Airlines will miss its original guidance. Last month, the company stated that it now expects Q2 adjusted non-fuel unit costs to increase 9%-10% year over year. Spirit also tweaked its revenue guidance, due to a slowdown in bookings during the peak of the crisis. It now projects that RASM will rise 4%-5% for the second quarter.

As a result, analysts expect EPS to be roughly flat year over year at Spirit in Q2. However, Southwest Airlines isn't likely to do any better. While it didn't suffer as much cost inflation as Spirit last quarter, Southwest expects to report a RASM increase of just 1%-2%.

Looking a little further ahead, the outlook for Spirit Airlines is much brighter. First, non-fuel unit costs are set to decline in the second half of the year. Beyond 2017, non-fuel unit costs should remain roughly stable over the next several years, though there will be ups and downs. The truly underappreciated part of the investment case for Spirit Airlines is its massive growth potential. Management estimates that there are at least 500 routes that Spirit could add that would meet its 15% minimum operating margin target.

The company's current fleet plan calls for it to operate 160 planes by the end of 2021, up from 104 as of the end of June. Spirit hopes to expand its fleet even faster than that, in order to achieve a medium-term annual capacity growth target of 15%-18.5%. For the five years beyond 2021, Spirit's management is contemplating an annual growth rate of at least 10%.

Even with this decade of double-digit growth, Spirit Airlines wouldn't come close to entering all of the 500-plus markets that management sees as attractive. Furthermore, Spirit Airlines may also have opportunities to increase service on existing routes.

To be fair, investors have historically paid a premium for Southwest Airlines stock (relative to other airline stocks) due to the company's consistent profitability and growth potential. That said, Spirit Airlines has also consistently been one of the most profitable airlines in the U.S. for the past five years. It may even be able to expand its profit margin in the next few years if it succeeds in its efforts to become more reliable.

In short, Spirit Airlines is a high-growth company, but Spirit Airlines stock currently trades like a value stock. If Spirit returns to a double-digit EPS growth rate in the second half of 2017 as expected, the stock could climb much higher.