We asked five of our Motley Fool investors which stocks they believe savvy investors should be adding to their portfolios this month. In their views, now is the perfect time to pick up Waste Connections Inc. (NYSE:WCG), Boston Beer Co. (NYSE:SAM), Duluth Holdings (NASDAQ:DLTH), Teva Pharmaceutical Industries (NYSE:TEVA), and SunPower Corp. (NASDAQ:SPWR).

Some of their reasons are more obvious than others, but all five of these companies have intriguing catalysts that make them top stocks to buy in July. 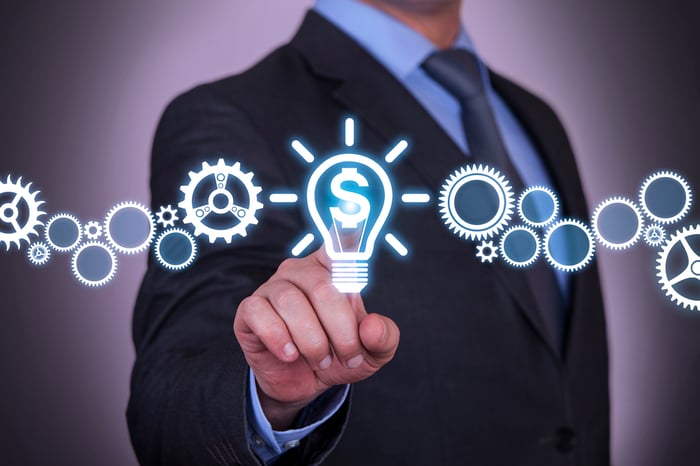 Todd Campbell (Waste Connections): Here are two truths about summertime. First, it's hot. Second, it's a booming period for waste disposal companies. If you didn't see that one coming, you're not alone. When it comes to summer, most people think cold drinks (see Steve's pick below!), not trash cans.

This year, Waste Connections came into summer with momentum. In the first quarter, prices were up 4.7% from last year; combined with higher volumes, that resulted in sales of $1.09 billion, which was ahead of the company's internal forecast.

Thanks to increases in construction spending and oil and gas activity, the company's seasonal tailwinds could be even stronger than normal this year too. Construction spending in May was up year over year 4.5%, according to Census Bureau data, and that bodes well for disposal volumes. Also, there are 510 more active land-based oil rigs operating in the U.S. now than at this point last year, so R360's business should be humming along nicely as well.

Admittedly, this isn't a high-flying stock pick, but it is a Steady Eddie type company that investors won't have too worry too much about. Perhaps, that's one more reason why I really like the idea of owning it. After all, I'd rather focus on my barbecue than on stock price gyrations this month.

Steve Symington (Boston Beer): Boston Beer isn't exactly the most popular company on the stock market right now. Shares of the craft brewer are down more than 20% so far in 2017, and trade near a four-year low -- with good reason. Revenue declined 14.6% year over year last quarter to $161.7 million, as price increases simply couldn't make up for a 15% decline in shipments. 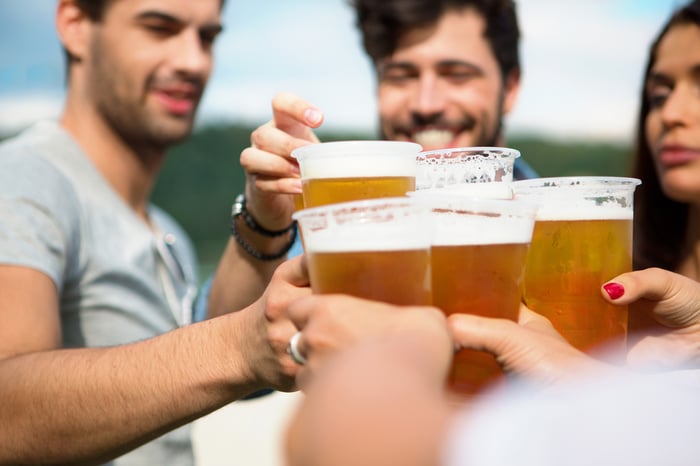 Management blamed the ongoing proliferation of competing brewers, weakness in Samuel Adams' spring seasonal varieties, and a "general softening of the craft beer category" for its woes. Boston Beer has also seen declines in sales of its Angry Orchard brand, reflecting headwinds in the cider category.

But I think investors are underestimating Boston Beer's staying power, as well as its ability to right the ship as it enters the lucrative summer season. For now, Boston Beer is focusing on returning its Samuel Adams lineup to growth through packaging innovation, promotions, and brand communication initiatives, while at the same time streamlining costs and adjusting short-term brewing capacity to better align with market conditions. And Boston Beer has maintained its market share in cider, while trends in the category have shown steady improvement. In addition, Boston Beer's Twisted Tea and Truly Spiked and Sparkling products are performing well, helping to prop up the rest of the business.

Perhaps most promising, however, is the fact that Boston Beer still commands less than 2% of the U.S. beer market, leaving the company with a long runway for growth. That's not to say it doesn't have plenty of work to do to become more competitive in the crowded craft beer market. But for investors willing to buy the stock while it's at multiyear lows and hold on while Boston Beer fights for position, I think it could offer some big gains the brewer's its turnaround becomes evident.

This retailer is bucking the trend

Brian Feroldi (Duluth Holdings): The brick-and-mortar retail industry is currently in a funk, which is a big reason why scores of chains are closing hundreds of stores this year, and others have filed for bankruptcy. These developments have caused Wall Street to sour on the entire sector, which includes Duluth Holdings. Thankfully, I think that this sectorwide sell-off is providing bold investors with a great opportunity to get in.

Duluth is a specialty retailer that targets tradespeople in rural areas. The company sells a wide selection of clothing and gear that is designed to solve the real-world problems of people whose jobs can take a toll on their clothes. What's more, Duluth effectively uses a distinct and off-beat brand of humor to market its products. The combination has helped it develop a deep connection with its customers.

While the bulk of Duluth's sales come through its catalog and online business, the company is making a big push to build out its physical retail presence. The company has 20 stores in operation, up sharply from just nine last year, but its long-term plan is to open up 100 stores. That represents a massive  expansion, which should drive outsize revenue and profit growth for years to come.

However, building and staffing all of those new stores certainly won't be cheap. This is a lesson investors learned the hard way in the company's most recent earnings report. While sales surged 22% higher thanks to growth in "virtually all product categories", the company's net income plunged 88% because of the higher costs associated with all of those additional stores. Traders thrashed the company's stock in response.

While watching Duluth's net income drop isn't fun, I for one think that the company is doing the right thing by investing heavily in infrastructure now. Meanwhile, the company's valuation has dropped below 22 times forward earnings. I think that's a bargain price for a business that has grown its top-line for 29 quarters in a row and still has ample room left for growth.

A drugmaker to cure your portfolio's ills

Sean Williams (Teva Pharmaceutical Industries): Feel free to call me a bit biased, but my top stock in July is brand-name and generic drug developer Teva, which also happens to be one of my personal holdings.

There's no denying that Teva has had a run of bad luck over the past year. For starters, its acquisition of generic-drug developer Actavis for $40.5 billion last year pushed it deeper into debt.  The company also agreed to pay massive fines to settle charges brought by the Justice Department and the Securities and Exchange Commission that it had bribed government officials and doctors in three foreign countries, revelations of which could potentially damage its reputation and pricing power. Even more recently, there have been worries about the future of lead brand-name drug Copaxone, an injectable treatment for multiple sclerosis (MS) for which patent protection has expired. With multiple makers of generics itching to get their versions into the marketplace, Teva's $4 billion a year cash cow could soon see rapidly declining sales.

Yet all of these negatives have created an opportunity for long-term-minded investors to dip their toes into the water. Teva is now priced at seven times next year's EPS (well below its historic average), is carrying a nearly 4% dividend yield, which is double that of the S&P 500, and is valued at nearly 30% below its average price-to-cash flow over the past five years.

Consider that Teva's acquisition of Actavis, while criticized, makes it the largest generic drug developer in the world. That should give it stronger pricing power, and allow it to take advantage of a growing trend toward generic-drug use in the years to come. On top of presumed better pricing power, the Actavis acquisition should yield $1.5 billion in cost synergies this year alone.

As for Teva's debt, while it's high at $34.6 billion, it's still manageable given that the company has levers it can pull to reduce it. It has already announced its likely intent to put its European oncology and pain business, along with women's health division, on the auction block, and it's generating north of $4 billion in operating cash flow annually.  Long story short, Teva has the ability to organically pay down its debt instead of relying on asset sales to push its debt lower. That's the sign of a healthy company.

Even worries about Copaxone could prove somewhat overblown. Teva has been using the legal system to the best of its ability to keep generic Copaxone off pharmacy shelves, and it's even introduced a new extended-release formulation of the treatment that can be injected three times weekly as opposed to daily.  The Copaxone name is well-known among physicians and consumers, so it may not see as much in the way of sales losses to generics as Wall Street expects.

By no means is Teva Pharmaceutical a perfect stock. But it has all the elements of a long-term winner, which means its short-term troubles are an opportunity for you to snag shares of this generic powerhouse on the cheap. 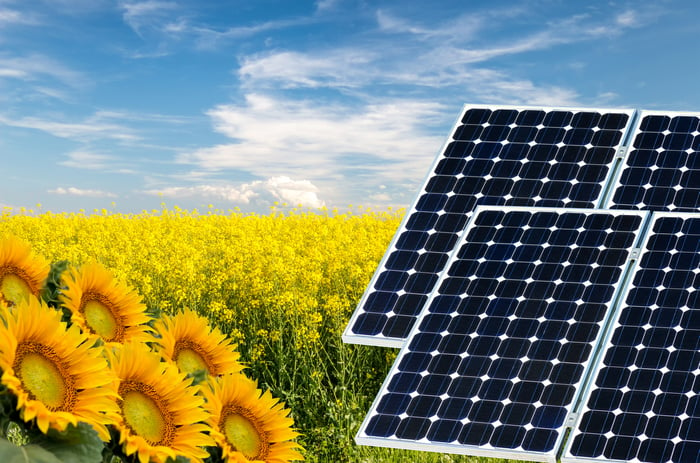 An investment with a sunny outlook

Travis Hoium (SunPower): After years of ups and downs during its development, solar power is now accepted within the broader energy sector as a reliable, cost effective source of electricity. When solar energy competes with fossil fuels head to head, without subsidies, it wins from Chile to the U.S. to India. But solar stocks haven't enjoyed the same growth or optimism.

SunPower, like many of its peers, has been beaten up the last two years, but it's still the solar industry's leader in panel efficiency. That's an advantage in space-constrained environments like residential or commercial rooftops, where the value of better technology often outweighs pure price concerns. In the utility segment, where cost is more important, it has a fully engineered solution called Oasis made with its P-Series solar panels, which are slightly more efficient than those of its rivals, but also price competitive.

What makes this the right time to invest in SunPower are the trends for the company and its industry. Short term, we're starting to see solar projects sell for more than anticipated as the required return for buyers falls and solar panel prices rise as summer demand surges. Those factors should bolster SunPower's 2017 results, particularly in the second quarter. And if this year isn't as bad as expected, it will be a welcome surprise for the industry, which is already expecting demand growth to pick up starting in 2019.

If the short-term picture is getting brighter, the long-term story for the solar industry is hard to gauge, but potentially incandescent. The opportunity can literally be measured in the trillions of dollars, and the industry is barely scratching the surface of its potential. Only about 2% of the world's electricity comes from solar energy, and the rapid advances in electric vehicles mean millions of people could be powering their cars with solar energy in the future.

SunPower today starts from a place as the industry's efficiency leader, a quality that's being appreciated more as developers look to squeeze additional energy out of the solar-installation space they have. As the solar industry matures and weaker manufacturers are pushed out, I think SunPower will expand its market share, and grow both its top and bottom lines. In an industry with trillions of dollars of potential revenue, a leader with a market cap of just $1.2 billion now has the potential to be one of the next decade's biggest winners for investors.