The house always wins, so both of these gaming stocks are good investments. But if you want to put the odds in your favor, one has some powerful hole cards that the other lacks.

Las Vegas Sands Corp. (LVS 2.84%) and MGM Resorts (MGM 1.25%) are two of the biggest gaming companies in the world. But they're very different in where they operate and how much risk they present to investors right now.

Neither of these casino operators' stocks are bad bets today, but which one offers you the better odds? 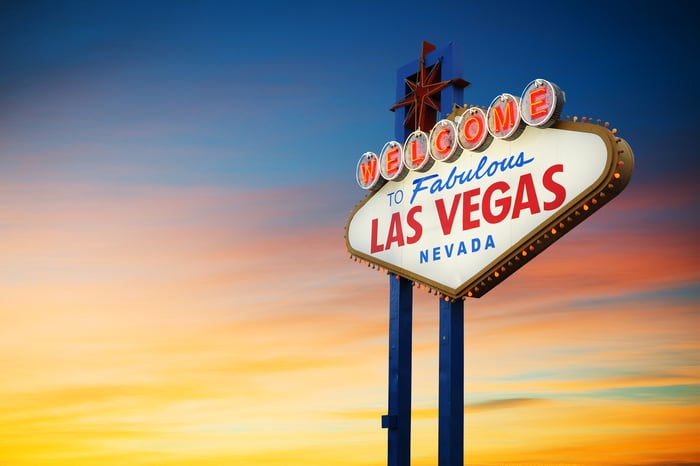 Where their money is made

This could be viewed as a strength or weakness for either company. The gaming industry in Macau has been particularly volatile over the last three years, and when gaming revenue declines there, it hurts Las Vegas Sands disproportionately. But when it rises -- as it has been doing in 2017 -- Las Vegas Sands sees an outsize benefit.

What MGM Resorts has going for it is the fact that business in Las Vegas has been extremely consistent the last few years. It's not growing a lot, but MGM's resorts keep steadily spitting out cash, which has allowed the company to invest in growth projects and de-lever its balance sheet.

The other major difference between MGM and Las Vegas Sands can be found on their balance sheets. MGM has nearly twice as much debt in relation to its EBITDA, a proxy for cash flow from a resort, compared to Las Vegas Sands. 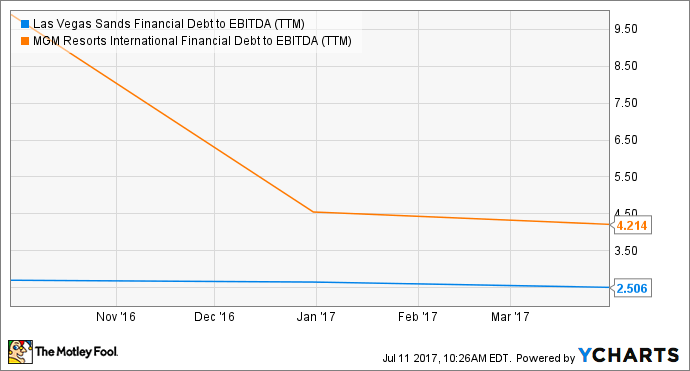 Typically, it's debt that's really a problem for gaming companies. When revenue falls, whether it's because of a recession or a crackdown on corruption, it hits the bottom line hard, which can make debt payments difficult. Both MGM and Las Vegas Sands nearly went under during the last recession because of their debt loads, and while both are healthier now, Las Vegas Sands has the clear advantage on that front.

Gaming companies have long been focused on growth, whether it was building new resorts or acquiring competitors. But as Las Vegas consolidated and Macau's limited concessionaires started to see cash pour in from casinos, the priorities changed. Las Vegas Sands and MGM have both reduced their debt levels, and they now have enough cash to pay dividends.

MGM Resorts just started paying a dividend this year and its implied yield is 1.4%. That could be a starting point for the dividend, but I would be surprised if management doesn't make further efforts to reduce debt before pushing its quarterly payouts higher.

Las Vegas Sands is using its cash cow properties in Macau to fund a dividend currently yielding 4.7% -- the best payout among the big gaming companies. Again, Las Vegas Sands has the advantage over MGM Resorts on this metric, which stems from its incredibly profitable resorts in Asia.

Las Vegas Sands has more upside based on its presence in Macau, less debt relative to EBITDA, and pays a better dividend than MGM Resorts. That's why I think it's the better stock of these two now -- and why I think it will be for a long time, if Macau and Singapore continue to be the highly profitable markets they are today.