Blue Apron (NYSE:APRN), the market leader in the meal kit delivery business, lowered the amount it expected to fetch during its IPO by over 30%. Investors further punished the new stock after it went public. With people growing skeptical about the start-up's future prospects, here are the vital facts you need to know.

On the morning before its June 28 IPO, Blue Apron said it expected shares to price between $10 and $11. Previously, it was thought that shares would price at $15 to $17. The tempered expectations reduced Blue Apron's total business valuation from some $3 billion to $2 billion. Total proceeds going to the company will likely come in shy of $300 million.

With one week on the books as a public company, investor appetite for shares has continued to sour. As of this writing, shares are nearly 30% lower at $7.50. 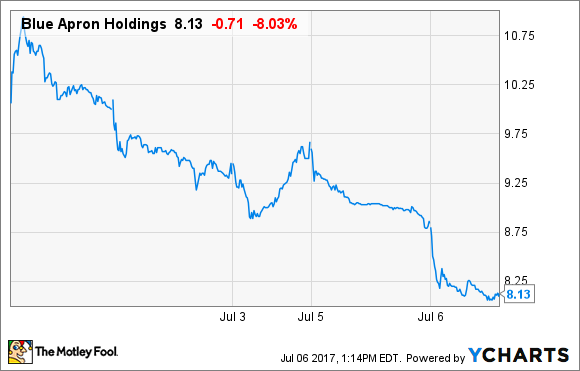 Why the quick change of opinion on one of this year's hottest IPOs? The likely cause is simple supply and demand. The higher demand for a new company's shares, the higher the price, and vice-versa. In this case, Blue Apron struggled to get big money investors to buy in, and smaller investors post-initial offering have been skeptical, too.

Questions as to how the company will use proceeds from its sale and outlook for future growth have come into focus. Blue Apron spends a lot of money on advertising -- over $60 million in the first quarter of 2017 alone -- and year-over-year revenue grew only 42% in the same period. That's compared to 133% last year.

Granted, it is still early for Blue Apron. It was launched just a short five years ago, and the company is expected to exceed $1 billion in revenue this year for the first time, an enviable feat. With that success, though, comes attention. And not all attention is good for a young start-up still trying to carve out its niche in the world. 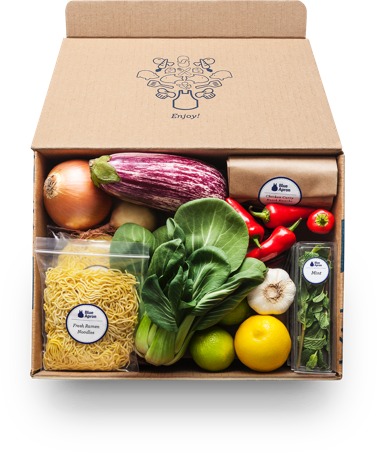 The grocery business is crowded and has lots of well-established players. However, the supermarket model has changed little in decades, paving the way for tech-savvy disruption.

For example, chains like Kroger and Wal-Mart have launched online ordering and pickup at store services to help families save time. Blue Apron and other similar competitors have also elbowed into the fray to deliver groceries directly to customers' doorsteps. However, the biggest question mark is probably the threat that online giant Amazon poses. The company has its own grocery delivery service in select cities, and its announced purchase of Whole Foods (NASDAQ: WFM) in June could expand those services.

That puts the young business of Blue Apron in direct competition with a business that has been successfully shaking up the retail world for years. Blue Apron still has limited infrastructure built for delivering food, but it has been working to change that through buyouts like the recent acquisition of BN Ranch. Amazon is building its food distribution network, too, but has a head start in its ability to get things delivered quickly, in existing delivery infrastructure, and in the depth of its pockets.

Blue Apron is a trailblazer. It is the largest meal kit business and the first to become a public company. As such, there is a lot of upside potential for the company long-term. However, there are a lot of question marks -- like how Blue Apron will continue marketing itself, whether customers will continue using its services, and how it will deal with big competition. As a result, the stock could have continued downside until those questions get answered.

And it's possible those questions never receive answers, or at least not good ones. At this point in the game, Blue Apron looks more like a gamble than a solid investment pick. I'd like to see at least a few questions addressed before considering a purchase.