Blue Apron (APRN 6.32%) is getting ready to set its IPO price, but first, it had to file some paperwork with the SEC. The meal-kit delivery service filed an amended S-1 with the SEC to change its price range from between $15 and $17 to between $10 and $11. That's about a 35% haircut off the original price and would value the entire company close to $2 billion, which was its valuation for its last round of venture-capital funding in 2015.

There have been questions surrounding Blue Apron since it initially filed its original S-1 documentation with the SEC at the beginning of the month. When Amazon (AMZN -5.14%) bought Whole Foods Market (WFM), it made Amazon a much bigger threat to Blue Apron than it currently is. Indeed, the competition seems to be getting to Blue Apron, and investors are worried that the worst is yet to come. 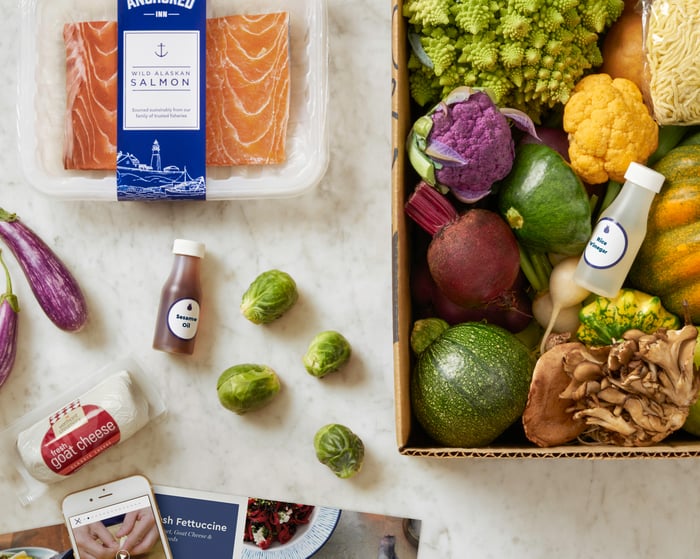 If you can't stand the heat, get out of the kitchen

There are relatively low barriers to entry for Blue Apron's meal-kit delivery business. That's exemplified by the surge in new entrants in the space over the last couple of years since Blue Apron's last funding round. There are niche services for all kinds of diets, and even more general services -- with additional ones popping up every year.

Blue Apron has retained its leading market position, but it's becoming more and more difficult for it to attract new customers and retain old ones. Over the last 12 months, the company spent $463 on marketing per net new customer who signed up for the service. Additionally, gross margin is declining, indicating pricing pressure from competition. And it still hasn't faced much pressure from any of the major grocery chains, which are arguably better positioned to offer the same service due to existing supply-chain infrastructure and greater economies of scale.

It's not a huge surprise, therefore, that Blue Apron had trouble finding demand for its IPO at a value more than 50% higher than its last funding round.

Despite the competitive pressure on Blue Apron, it's worth taking a closer look at the company now that it's valued significantly lower.

Blue Apron produced revenue of $245 million in the first quarter, for a run rate of $980 million in 2017. While the first quarter is seasonally strong, the company has been able to grow revenue sequentially every quarter since the start of 2015. In 2017, the company will face its toughest challenge yet to keep that streak alive, but it's a good bet Blue Apron will produce over $1 billion in revenue this year.

At a 2-to-1 price-to-sales ratio, Blue Apron is still valued at a premium to traditional brick-and-mortar grocery stores, which generally trade for less than one times sales. Whole Foods Market's $13.7 billion price tag represents 0.9 times expected sales. But e-commerce companies trade for much richer valuations, with Amazon, for example, trading for 2.8 times expected sales. As a combination of the two, Blue Apron's valuation seems fair at this price.

But the question investors must ask is, will revenue be able to keep growing? There's certainly a huge market opportunity available. Blue Apron believes it can take share from both grocery sales and restaurant spending, which combined for over $1 trillion in revenue last year.

But if Blue Apron manages to start drawing significant revenue away from either industry, both are well positioned to offer competing services. Those big competitors have built-in brand recognition, scale, and supply-chain infrastructure to easily outmaneuver Blue Apron. That will put a cap on its ability to penetrate the market before the competition becomes too much.

While its growth has been strong for the last few years, Blue Apron is just starting to attract the attention of bigger players in the industry. And as more competitors have entered the market, we've seen revenue growth slow and profit margins shrink. If a big name comes in -- and it certainly looks like Amazon could -- it will exacerbate those trends. Even at a two times sales multiple, Blue Apron may be asking a lot from investors.