With a 3.9% yield, 22 consecutive years of dividend growth, and an average annual payout increase of 16.3% over the last decade, International Business Machine's (NYSE:IBM) returned income profile is one of the most compelling reasons to own the stock.

However, the company is also undergoing a transition to counteract declining sales for its legacy hardware and services businesses, and that creates some uncertainty as to whether Big Blue's dividend is still the sure thing that it has been over the last two decades. Can investors count on IBM to continue its stellar dividend history in light of these challenges? 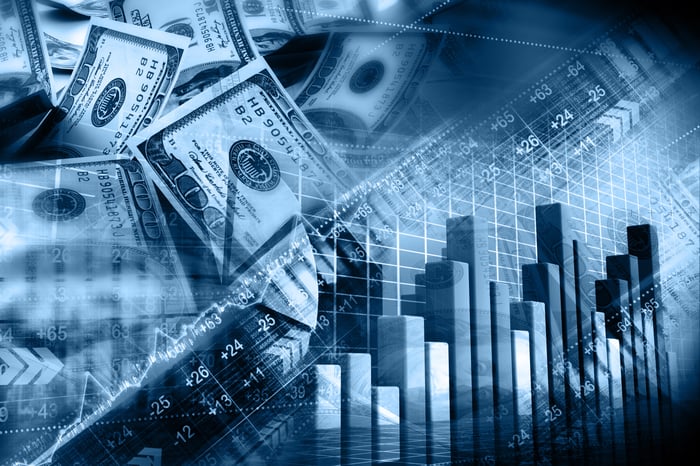 As more computing and storage functions are moved to the cloud, IBM's hardware offerings face mounting pressure, which, in turn, also negatively affects its software and services businesses. IBM has seen overall revenues decline for 20 consecutive quarters, with sales down roughly 30% over the stretch and now at their lowest point in 15 years. A reliable track record of payout increases is a quality income investors should prize, but a great dividend history isn't worth much without the business to sustain it.

To the company's credit, IBM has a history of innovation and appears to have many of the necessary pieces in place for a successful turnaround. Its investments in cloud, analytics, security, mobile, and social (a group of businesses that the company calls "strategic imperatives") are yielding promising results, and these growth categories look to give the company some resilience even if hardware sales suffer a quicker-than-anticipated decline.

Combined strategic imperatives revenues grew 12% year over year in the first quarter and have brought in $33.6 billion over the trailing-12-month period to reach 42% of revenue. That puts the company ahead of its target of having these businesses constitute 40% of sales by 2018, and IBM has also indicated that it's ahead of schedule on reaching $40 billion in sales from its strategic imperatives businesses in the next fiscal year. Whether these gains will be enough to offset legacy business declines remains to be seen, but the company does have feasible avenues back to long-term growth despite its deteriorating legacy components.

IBM closed its last quarter with $10.7 billion in cash and short-term assets against a debt of $42.8 billion. Here's a look at the trajectory of the company's net debt over the last decade: 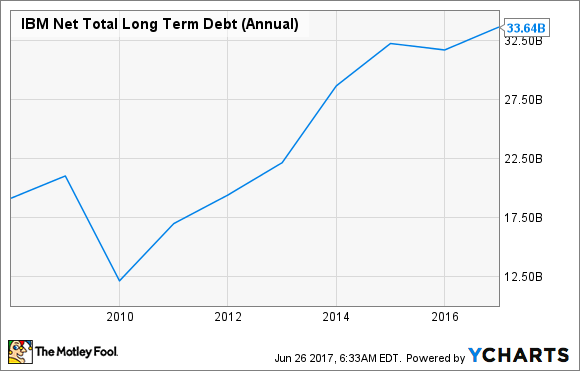 The company's investments in growth businesses combined with share buybacks and the cost of distributing its dividend have added debt to the books; however, the picture isn't as bad as it might look. Roughly two-thirds of the company's debt is tied up in the company's financing business, IBM Credit, and while this debt still presents some risk in the event of loans the company has made being written off, it does a lot to reframe Big Blue's debt picture. With global financing debt taken out, the company is holding roughly $14.3 billion in other debt -- not particularly worrying in the context of its cash and short-term investment holdings and free cash flow (FCF).

From 2004 to 2015, IBM delivered double-digit dividend growth annually, but payout increases have slowed over the last couple years. 2016's and 2017's respective increases of 7.7% and 7.1% still delivered solid growth, but the slowdown points to the likelihood of smaller dividend growth in the near term.

The trailing-12-month period has seen IBM generate roughly $11.5 billion in free cash flow, a hefty sum and enough to cover its forward dividend payout twice over. However, FCF has been trending downward amid softening legacy hardware and software sales and investments to transform its business for the future. 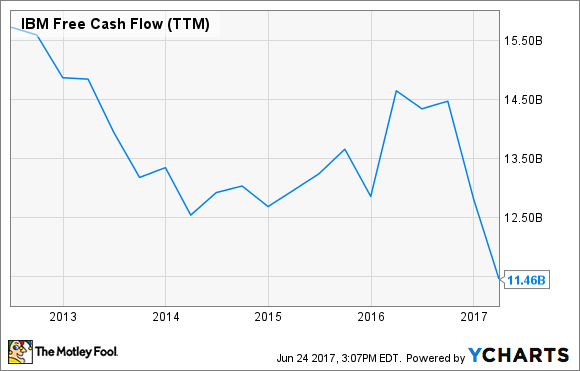 While maximizing shareholder value has been a guiding principle at the company over the last decade, investors probably shouldn't buy the stock with expectations of a return to consistent double-digit dividend growth until the effects of its turnaround become more pronounced. That said, the company already boasts an impressive yield and will likely continue to add to its history of annual payout increases.

Trading at roughly 11 times forward earnings, IBM looks like a worthwhile investment even in light of the considerable challenges it faces in modernizing its business, and it deserves strong consideration if you're looking for an income play in the tech sector.