Magellan Midstream Partners, L.P. (NYSE:MMP) has had a relatively quiet first half of 2017 since it didn't announce any major acquisitions or new growth projects. That said, what the company has lacked in big moves, it made up for by completing two smart ones.

Earlier this year Magellan Midstream Partners announced that it had completed construction of its $300 million condensate splitter in Corpus Christi, Texas. However, the sole customer of that facility gave notice that it was terminating the contract, which Magellan believed was a breach of their agreement. While it had initiated legal action against the customer, it was continuing negotiations with them, as well as with other potential clients. 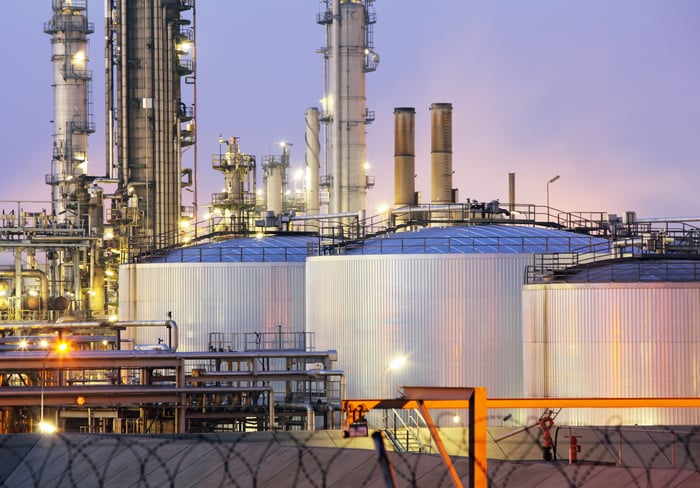 That said, several weeks later the company announced that it had reached a new long-term agreement with that customer. Furthermore, Magellan would build an additional 300,000 barrels of storage capacity at the facility, bringing the total up to 1.5 million barrels, and make some other minor modifications to the splitter. While those changes would result in the company investing another $30 million into the project, it would still generate a lucrative 7.0 times earnings before interest, taxes, depreciation, and amortization (EBITDA) multiple on the investment, which is higher than some of its other recent investments.

As a result of that smart move to work with its customer, Magellan was able to lock in revenue and cash flow from the splitter for 2017. That proved to be perfect timing because the cash flow from that facility will offset the impact of weaker commodity prices on some of its other business lines, allowing the company to reaffirm its guidance that it should hit a record $1 billion of distributable cash flow this year. Because of that, the company remains on pace to boost its payout 8% this year and in 2018, while maintaining a conservative 1.2 times coverage ratio.

Increasing capacity of the BridgeTex Pipeline

In 2014, Magellan and its partner Plains All American Pipeline (NASDAQ:PAA) finished construction on their jointly owned BridgeTex Pipeline, which initially had the capacity to transport 300,000 barrels of oil per day. The project was an excellent investment opportunity because the partners expected to earn an 8.0 times EBITDA multiple on their initial investment, with upside potential as they expanded the pipeline in the future to as much as 400,000 barrels per day.

That expansion became a reality in January this year when the companies announced that they would make enhancements to existing pumps and related equipment so that the system could handle 400,000 barrels per day.  The partners anticipated that the project would come online by mid-year.

That said, Magellan and Plains All American Pipeline see the potential for a further expansion of the pipeline's capacity to as much as 475,000 barrels per day. In fact, earlier this month the partners launched an open season to assess customer interest for expanded capacity on the system through a new origin point in the Permian Basin that would initially expand the pipeline up to 440,000 barrels per day. This incremental expansion, like the one that increased capacity up to 400,000 barrels per day, wouldn't require a significant capital outlay and could, therefore, boost the overall returns the partners would earn on the project. It's high-return expansion projects like these that could help both companies deliver steady earnings growth in the coming years.

While the announcement of large capital projects and acquisitions grabs the headlines, incremental expansions of existing systems often offer companies the best returns. That's why Magellan was smart to work with its existing customers to secure these low-cost expansion opportunities because they offer quick payouts, which enhance the company's ability to continue growing its distribution to investors.