If there's one thing that's apparent, it's that uncertainty is on the minds of most politicians and pundits nowadays. Regardless of where one stands politically, it's fair to say we're in uncharted waters, which for many investors means renewed interest in gold.

Oftentimes, the initial reaction is to turn toward mining stocks. However, these companies don't react as strongly -- for a variety of reasons -- when bullion's price tag rises. The better choice resides with royalty and streaming companies, but where does the best opportunity lie? Let's take a look at some of the leaders in the space: Royal Gold (NASDAQ:RGLD), Franco-Nevada (TSX:FNV), and Wheaton Precious Metals (NYSE: WPM). 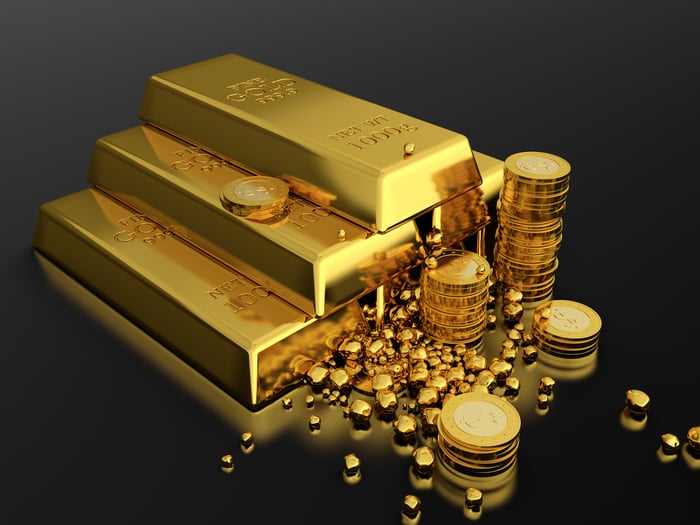 Which kind of company to choose?

Undoubtedly, the best investors are well-informed investors, so it's worth learning (or reviewing) the difference between royalty and streaming companies and gold-mining companies. Royalties provide companies with the ability to collect a percentage of mineral production from mining operations. Streams, on the other hand allow them -- for an upfront payment -- to purchase all or a portion of one or more the precious metals produced from a mine for a set term at a price that is typically well below current spot prices.

These companies are great opportunities for gold bulls in that they bear fewer of the risks associated with gold-mining operations: compliance with environmental and health regulations, permitting requirements, capital costs of operating projects, and the construction of new projects (and this is far from an exhaustive list). 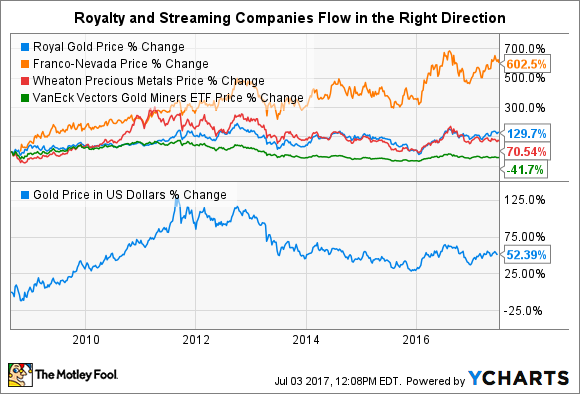 Over the past 10 years, it's clear which companies have benefited the most from the rise in the spot price of gold. Though the VanEck Vectors Gold Miners ETF (NYSEMKT:GDX) includes some royalty and streaming companies in its holdings, the ETF primarily provides exposure to miners, and it has fallen 42% while the spot price of gold has risen more than 32%. The three royalty and streaming companies in this peer group, however, have all outperformed the rise in gold.

Although all three companies maintain considerable exposure to gold, they're far from equal. In fiscal 2016, Royal Gold reported that gold accounted for 85% of its revenue. However, Franco-Nevada attributed only 70% of its revenue to gold. Wheaton Precious Metals reported a mere 46% of its revenue came from the yellow stuff, and according to a recent investor presentation, this won't be changing anytime soon; management estimates gold will account for approximately 45% of revenue through 2021. 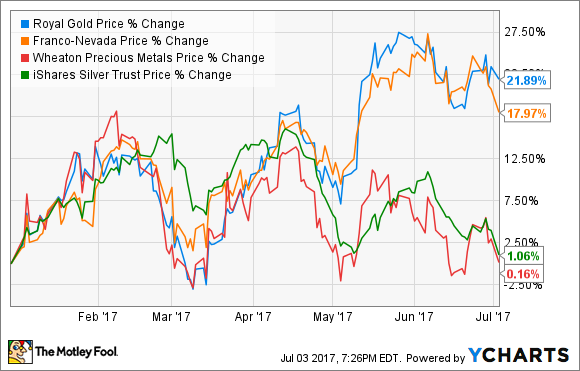 Gold as a percentage of revenue isn't the only metric which proves Royal Gold's strong reliance on the metal. In a recent investor presentation, Royal Gold illustrated how its investors have greater exposure to gold through its stock: The level of gold-equivalent ounces (GEOs) per 1,000 shares has consistently exceeded its peers since 2011. 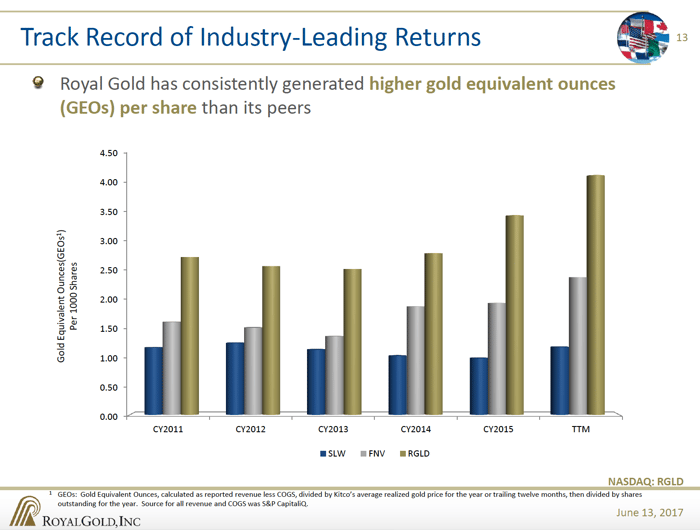 In all likelihood, Royal Gold will continue to benefit as bullion prices rise over the next few years. According to guidance issued earlier this year, Royal Gold will report an 8% compound annual growth rate (CAGR) in GEOs through 2019. If Franco-Nevada achieves the midpoint of its guidance, its existing portfolio will generate 527.5 million GEOs in 2021 -- a 2.58% CAGR based on the 464.4 million GEOs it reported in fiscal 2016. But the disparity is even greater than that. Franco-Nevada includes silver, platinum, and palladium metals in its GEOs calculation.

Although Wheaton Precious Metals hasn't reported GEOs guidance, based on its history and lack of announcements suggesting a shift in the company's priorities, it won't usurp Royal Gold's position in the foreseeable future.

Put away that wallet

Continuing to look into the future, we find that Royal Gold has another benefit: no upcoming payments to finance projects. This means that a rise in bullion will show up on the bottom line more than it will for peers, as the company's not obligated to satisfy any funding commitments. According to Royal Gold, it has sequential growth catalysts -- all of which have been funded -- stretching from 2017 through 2019. For one, New Gold's Rainy River project, of which Royal Gold has a 6.5% stream on gold, is expected to commence gold production in September. Royal Gold's management has high hopes for the project. In its 2016 annual report, it stated that the project is "expected to become a strong revenue contributor when production commences." Moreover, Royal Gold has royalties on the Crossroads project at Barrick Gold's Cortez mine and the Pyrite Leach Project at Goldcorp's Penasquito mine.

Unlike Royal Gold, Franco-Nevada has upcoming funding commitments. At the end of Q1 2017, the company reported that it had contributed $512.4 million of its $1 billion commitment to First Quantum's Cobre Panama project. In total, the company expects to provide between $200 million to $220 million to the project in 2017.

Similarly, Wheaton Precious Metals has funding commitments, which have not yet been satisfied: $138 million remaining in payments related to the development of the Toroparu mine in Guyana and $136 million remaining in payments toward the construction of the Cotabambas mine in Peru. Both projects are early in development and Silver Wheaton may walk away from the deals if certain conditions are not met.

Should bullion prices rise, it stands to reason the companies that will benefit the most are the royalty and streaming companies -- not the ones digging the gold out of the ground. And of these, it's the company with the greatest exposure to gold that will see the largest benefit. Considering how much the yellow metal accounts for Royal Gold's revenue, it's clear that it stands to prosper significantly; moreover, the fact that there are fewer payments on its horizon represents an even greater opportunity for the company.