Please ensure Javascript is enabled for purposes of website accessibility
Log In Help Join The Motley Fool
Free Article Join Over 1 Million Premium Members And Get More In-Depth Stock Guidance and Research
By Danny Vena – Jul 12, 2017 at 8:31AM

After picking a public fight with the House of Mouse, the richest man in China is bowing out gracefully.

You may not have heard of billionaire property magnate Wang Jianlin, the CEO of Dalian Wanda Group. He's China's richest man, and built numerous theme parks with the goal of besting The Walt Disney Company (DIS -2.60%) in his home market. Last year, the mogul made a number of provocative statements, in which he vowed to crush Disney, saying it "should never have entered China."

Just before the $5.5 billion Shanghai Disneyland opened last year, Wang announced plans to build 15 to 20 theme parks and resorts to compete with the House of Mouse in his native China. The resorts would include amusement parks, water parks, shopping malls and luxury hotels, and would surround Disney "like a pack of wolves." He added:

The frenzy of Mickey Mouse and Donald Duck and the era of blindly following them have passed ... [They are] entirely cloning previous IP, cloning previous products, with no more innovation.

After all that hype, it came as quite a surprise when the Dalian Wanda Group announced that it would sell a 91% stake in the tourist attractions, just a year after the opening of the first location. While the Chinese mogul's parks have struggled, Disney reported a strong first year for its Shanghai park and attendance that exceeded expectations. 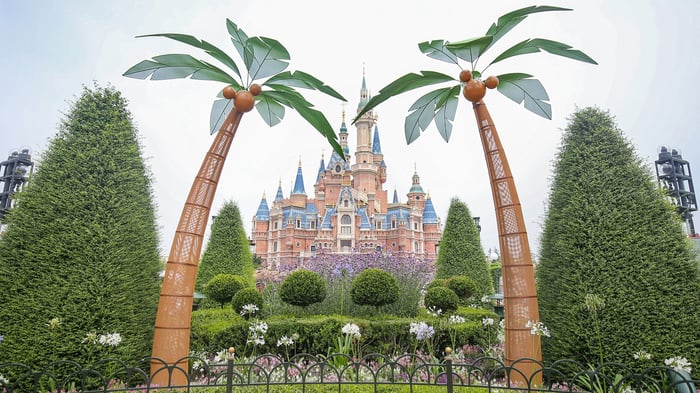 The goal to unseat Shanghai Disneyland was a fairy tale. Image source: Disney.

All bark and no bite?

Wang had criticized Disney for the cost of its parks, indicating he couldn't comprehend how the company could spend so much money, and bragging about the much lower costs to build his parks. In a delightful bit of irony, one of his previous locations closed for maintenance less than two years after opening.

He also touted the lower costs to attend his park compared to Disney's. A day pass to Shanghai Disneyland would set back consumers $75 during peak days and $56 during low season, much higher than $58 and $37 for Wanda's parks. Still, even at the lower prices, attendance paled compared to Disney's. The Wanda park in the Chinese city of Nanchang recorded only 1.3 million visitors in its first seven months of operation, far below the 11 million reported by Shanghai Disneyland during its first year.

Disney CEO Bob Iger presided over the one-year anniversary of the company's Chinese theme park last month, revealing that during its first year of operation the resort had "exceeded every one of [our] expectations, from theme park attendance to guest satisfaction." Given the competition and the significant uncertainty about how Chinese consumers would react to the park, this was a massive win for Mickey and friends.

The rollout of Disney's park in Shanghai held far less drama than that of its European counterpart Euro Disney in 1992. The company had difficulty with that park, later renamed Disneyland Paris, from the beginning; it made a number of rare missteps, including incorrect assumptions about visitor demand and the cost of wages. The company recently gained the shares necessary to force a buyout and acquire full control of Disneyland Paris, and has plans for $1.6 billion in upgrades and improvements. 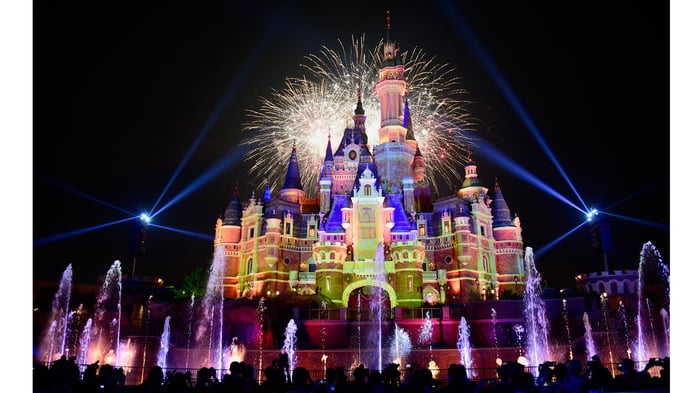 The first year of Shanghai Disneyland is a resounding success. Image source: Disney.

Not all fun and games

There are any number of reasons that the Wanda Group has abandoned its plans to take on Disney, with its lack of initial success being only one of them. Wang was quoted as saying that the move would improve his company's balance sheet, which some considered over-leveraged due to the amount of debt. This may have caught the eye of Chinese regulators, forcing the move.

Still, given Disney's rich history of success at managing its intellectual property, it should come as no surprise that it is doing just fine. In its most recent quarter, the company grew revenue by 3% over the prior-year quarter, to $13.3 billion, and its park and resorts division contributed $4.3 billion, a year-over-year increase of 9%. With the success of Shanghai Disneyland, those figures will likely grow.