These past several months have been a pretty transformative time for oil refiner HollyFrontier (NYSE:HFC) and its subsidiary master limited partnership Holly Energy Partners (NYSE:HEP). HollyFrontier made a big acquisition back in October that has the potential to do great things for the bottom line. To make it happen, though, it had to utilize Holly Energy Partners in a unique way by dropping down some assets that don't typically fit the mold of a pipeline partnership.

With these moves complete, HollyFrontier's management is now positioning itself for the next chapter. Here are several quotes from the most recent conference call that highlight how management plans to tackle the next several months and years. 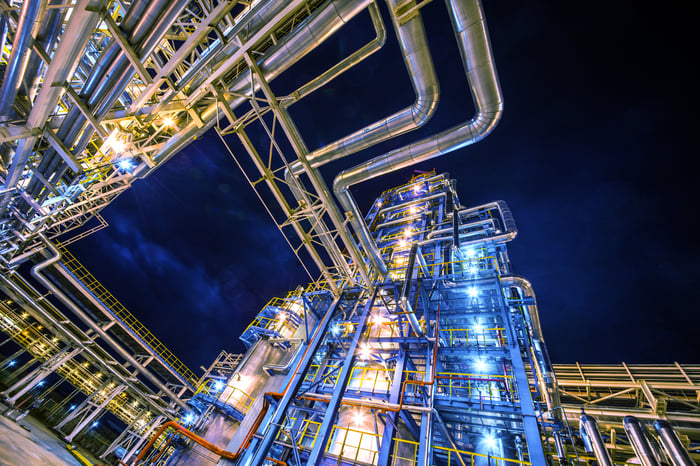 The past year and a half has been a tough time for refiners in general, but it has been especially hard on refiners that don't have export capabilities like HollyFrontier. Rising crude prices and high levels of gasoline and diesel inventories led to low margins and, inevitably, almost non-existent bottom line results. It looks like the market is starting to turn, though. According to CEO George Damiris, the outlook for the rest of the year looks much better:

Our refining outlook for 2017 remains cautiously optimistic. We anticipate solid economic growth will continue to support refined product demand and sustained growth in domestic crude oil production will lead to improved crude differentials... With a large portion of our scheduled maintenance behind us, we are poised for strong financial and operational performance for the remainder of the year.

It should be noted that Damiris gave this outlook before oil prices started to decline again in recent weeks. Refiners tend to feast in a declining crude price environment, so don't be surprised if second-quarter results come in better than expected.

This past quarter was the first time that HollyFrontier reported results for its recent PetroCanada Lubricants (PLCI) acquisition. Damiris noted that the partial result from the two months was better than expected and that there are several opportunities to get even better.

The integration of PCLI continues to progress smoothly. We appreciate the warm reception from our new, talented, knowledgeable and dedicated colleagues. We welcome them and the skills and capabilities they bring to HFC.

We remain confident in our $20 million per year synergy target and expect to realize these benefits as we further integrate our 2 lubricants businesses. Combining PCLI with our existing Tulsa specialty lubricants business creates scale, diversity, operational and financial synergies and a solid platform for growth. There is also opportunity to increase Group III base oil production through feedstock optimization, allowing for significant margin uplift potential.

Group III base oils are a lubricant with higher viscosity ratings, which means they can handle higher pressures and temperatures. Automotive manufacturers are using them more and more because they reduce engine friction -- better gas mileage -- and extend the life of an engine. This gives HollyFtontier an immense opportunity and is probably the best place for HollyFrontier to allocate capital at this time. The average per barrel margin for Group III base oils in the first quarter was $61. Compare that to the $10 per barrel margin for conventional refining, and you can easily see why this is a lucrative business.

Perhaps the biggest stain on HollyFrontier's operational and financial results in recent quarters has been its Rocky Mountain assets, most notably the Cheyenne refinery. To fix this problem, management has dedicated a lot of human resources to get that facility back to fighting shape. According to Damiris, the team there has made a lot of progress over the past couple months.

Granted, Cheyenne is a much smaller facility than its other refineries, but any company in the refining business needs all its assets in top form in a low margin environment. If the company can boost productivity here, it should almost directly flow to the bottom line.

Even though master limited partnerships have been around for more than 30 years, it seems that management teams are still trying to figure out the most efficient way to structure the relationship between a limited partnership and its general or managing partner. Typically, the general partner will have incentive distribution rights (IDRs), which means the parent is entitled to a set percentage of distributable cash flow that increases as per share distributions increase. This structure gives the managing partner a lot of incentive to grow the partnership's payout. Over time, though, the percentage to which the general partner is entitled negatively impacts a company's cost of capital and constrains growth.

As a result, we have seen several other MLPs get rid of this corporate structure lately instead of a high ownership of limited partner shares. Of course, analysts asked management if there were any plans to make a similar change related to Holly Energy Partners. Here was Damiris' response:

Regarding the IDRs, we continue to work it. We've been a little bit preoccupied with our PCLI [PetroCanada Lubricants] acquisition integrating that into HollyFrontier. So a lot of the people and resources we needed to address the IDRs are just not being freed up from the PCLI activities. We'll continue to evaluate it and will probably be in a position to further address in subsequent quarterly calls. We think it makes a lot of sense to look at it. At the end of day, it's going to have to be something that's right for both the GP and the [LP], obviously. But it seems to make a lot of sense, but we have a lot of Is to dot and Ts to cross before we get to a point where we can make a call on this one.

By the sounds of it, we can probably expect something to happen in the coming quarters. One thing that Damiris did note, though, was that management is adamant about maintaining control of the partnership. It will be interesting to see what solution management comes up with to reconcile the discrepancy.

A pause in growth

In the fourth quarter of 2016, HollyFrontier dropped down some refining units at its Woods Cross facility to Holly Energy Partners. Part of the logic behind the deal was to raise capital for the PetroCanada acquisition. This drop-down was considerably larger than most others Holly EnergyPartnerss has received in the past. As a result, Damiris noted that the company plans to tap the brakes on future sales to the partnership.

[W]e're not anticipating drop-downs in 2017. Obviously, we did an outsize drop-down with the Woods Cross processing unit last year. We think we probably got a little more runway in the drop-downs of processing units. Obviously, we've done all the traditional logistics in terms of pipes and tanks. But really what we'd like to do, and this gets the IDR discussion is, we'd like to see HEP continue to grow externally, if you will. I think the other major area where we still have opportunities to leverage HFC for HEP's benefit is replacing other third-party service providers with HEP.

HollyFrontier doesn't have any more pipe or terminal assets that would be an ideal fit for Holly Energy Partners. That means the next phase of growth for the partnership will have to come from one of three places: build assets on its own; buy assets from third parties; or, as Damiris, mentioned, take on more refining units. Refining units aren't necessarily the best kind of assets for a business that wants steady cash flow.

Another reason the company will want to hold off on any more development is that its current debt leverage is higher than its target level. Management says it wants to keep a net debt to EBITDA ratio of less than four times, and the company is currently above that for the time being. Luckily, the EBITDA contribution from Woods Cross should give it enough cash coming in the door for Holly Energy Partners to maintain its streak of 50 consecutive quarters with a distribution raise intact for a few more quarters until management figures out the next step.