Please ensure Javascript is enabled for purposes of website accessibility
Log In Help Join The Motley Fool
Free Article Join Over 1 Million Premium Members And Get More In-Depth Stock Guidance and Research
By John Maxfield - Jul 12, 2017 at 10:23AM

It was a good quarter for JPMorgan Chase, though its earnings per share is expected to drop compared to the first quarter.

When JPMorgan Chase (JPM -0.78%) kicks off second-quarter earnings season for banks this Friday, its shareholders can anticipate a typically solid performance.

The decline from the first quarter can largely be explained by an expected drop in trading revenues. JPMorgan Chase earned $6.5 billion in trading and related revenues last quarter, driven by increased activity among its institutional investor clients. But low market volumes and volatility in the latest quarter acted as headwinds.

"Low rates, a more cautious outlook on rates, low volatility have led to low client flows and a generally quiet, subdued and challenging trading environment," JPMorgan's chief financial officer Marianne Lake said at an industry conference at the end of May. "There's not a lot to trade around right now, and so there's not a lot of market themes."

The impact of interest rates 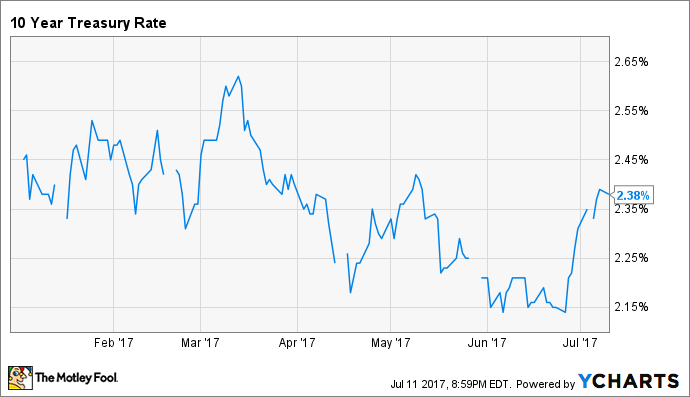 JPMorgan Chase, like most banks, earns more money as interest rates rise. This is because higher interest rates translate into higher loan yields. And because loans are one of the main products banks sell, a higher price (i.e., yield) for that product is almost necessarily good for the top line.

In its first-quarter 10-Q, JPMorgan Chase estimates that a 100 basis point, or 1.0 percentage point, increase in short- and long-term rates would equate to $2.3 billion worth of additional annual net interest income.

Interest rates and trading results aside, the second quarter was generally good for JPMorgan Chase. The clearest indication of this was its performance on this year's stress tests. The New York-based bank sailed through the tests' first phase, the Dodd-Frank Act stress test, or DFAST, with far more capital than it would need to survive a severely adverse economic scenario akin to the financial crisis. It also had a good showing in the second round, the Comprehensive Capital Analysis and Review, or CCAR, which tests whether banks' capital planning processes are sufficiently sophisticated to continue operating through a deep downturn.

The net result was that JPMorgan Chase received approval from regulators to increase its dividend and share repurchase authorization. In a press release issued immediately after the CCAR results were published, JPMorgan Chase said that its board intends to raise its quarterly dividend by 12%, to $0.56 per share, starting in the third quarter. And over the next four quarters, the bank expects to buy back $19.4 billion worth of its common stock.

In sum, while JPMorgan Chase's second-quarter earnings per share is expected to retreat from the first quarter, there's nothing in the bank's performance over the last three months that changes the otherwise optimistic investment thesis underlying its stock.