Qualcomm, Seagate, and Garmin all trade at low valuations but pay impressive dividends.

Many investors buy tech stocks for growth. But with the market hovering near all-time highs, it might be smart to own some slower-growth "mature" tech stocks which pay dividends and trade at lower valuations. Here are three stocks which fit that bill -- Qualcomm (QCOM 3.14%), Seagate (STX), and Garmin (GRMN 3.36%).

Qualcomm, the biggest mobile chipmaker in the world, pays a forward yield of 4.1%. It's raised that dividend every year since it started paying it in 2003. That trend should continue for the foreseeable future, since the compeny only spent 70% of its earnings and 56% of its free cash flow on dividends over the past 12 months. 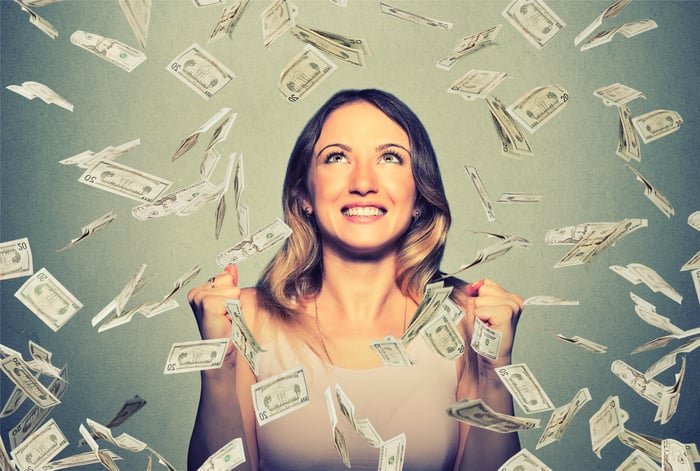 Qualcomm is also fundamentally cheap at 19 times earnings, which is lower than the industry average P/E of 24 for semiconductor makers. But analysts expect its revenue and earnings to respectively fall 3% and 4% this year, as its chipmaking unit cedes market share to cheaper rivals and first-party chips from device makers, and its higher-margin licensing business continues to face pressure from regulators, rivals, and customers, which all claim that its licensing practices are anti-competitive.

Those challenges seem daunting, but Qualcomm is aggressively expanding into adjacent markets like wearables, drones, cars, and Internet of Things (IoT) devices to offset the challenges to its mobile business. It also plans to acquire NXP Semiconductors (NXPI 5.22%), which would make it the biggest automotive chipmaker in the world and expand its serviceable addressable markets by about 40% in 2020. If that deal closes, Qualcomm will evolve into a better diversified chipmaker with more sustainable growth.

Hard drive maker Seagate pays a forward yield of 6.6%. Seagate hasn't raised that payout since 2015, but it only spent 77% of its earnings and 38% of its free cash flow on those payments over the past 12 months, indicating that it has plenty of room to continue making payments, and maybe even make hikes in the future.

Seagate stopped raising its dividend due to cash flow concerns, but its free cash flow growth rebounded over the past year on stronger sales of its enterprise storage products. Unlike its bigger rival Western Digital, Seagate doesn't have a major presence in the higher-growth SSD (solid-state drive) market or flash memory. However, Seagate compensates for that weakness with partnerships with memory makers Micron and SK Hynix.

Analysts expect Seagate's revenue to dip 2% this year, but for its earnings -- which are boosted by better cost controls and share buybacks -- to nearly double. This makes Seagate a fairly cheap play at 16 times earnings, which is much lower than the industry average P/E of 70 for data storage providers.

GPS maker Garmin pays a forward yield of 4%. It spent 73% of its earnings and 82% of its free cash flow on that dividend over the past 12 months, but it hasn't raised that payout since 2015. However, Garmin remains a cheap stock at 14 times earnings, which is less than half the industry average P/E of 30 for scientific and technical instrument makers.

Wall Street expects Garmin's revenue to stay flat this year, and for its earnings to decline 5%. Those declines are attributed to its transition away from its shrinking automotive GPS business (which are being displaced by smartphones and in-dash units) toward higher sales of GPS devices for marine, aviation, and outdoor uses. It also owns a growing wearables business, which made it the fifth largest wearables maker in the world during the first quarter of 2017 according to research firm IDC.

Analysts expect that transition to produce better growth next year as revenue and earnings respectively rise 1% and 2%. Those aren't jaw-dropping growth figures, but they should make Garmin a fairly reliable income play for the foreseeable future.