Shares of Arcos Dorados Holdings Inc. (NYSE:ARCO) have surged thus far this year, climbing on a pair of strong earnings reports. According to data from S&P Global Market Intelligence, the stock has gained 52% so far in 2017.

Shares of the McDonald's franchisee have moved been volatile and were up as much as 75% earlier in the year: 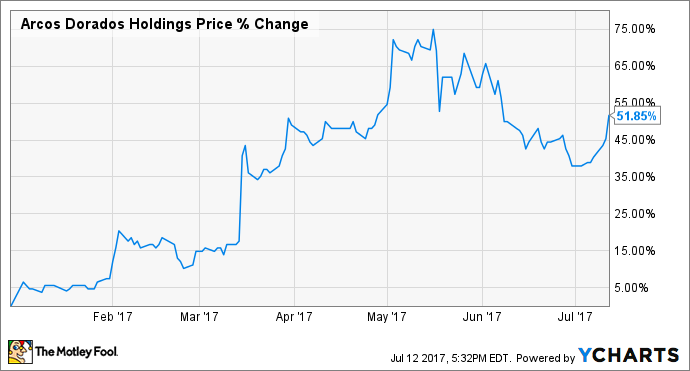 The largest McDonald's franchisee, which owns around 2,000 of the fast-food locations in Latin America, had its best day of the year on March 15, when the stock jumped 20% on a strong fourth-quarter earnings report. On a constant-currency basis excluding Venezuela, revenue increased 14.2% in the quarter, and earnings per share improved from $0.03 the year before to $0.10. That beat estimates at $0.06 a share.

The stock popped again on a strong first-quarter earnings report at the beginning of May, with adjusted revenue growing 17% and earnings per share improving from $0.08 to $0.19 as the company's turnaround under CEO Sergio Alonso continues to take hold.

Later that month, however, the stock gave back much of those gains during a massive Brazil-based sell-off resulting from a corruption scandal in the country. About half of Arcos Dorados' restaurants are located in Brazil.

Shares of Arcos Dorados had fallen to nearly $2 a share back in early 2016, as losses piled up in what had been a disastrous stock since its 2011. However, the company has since sold off some stores to shore up its balance sheet and has been benefiting form an improving economy in Brazil, which is emerging from a recession, and elsewhere in Latin America. Considering the strength of the McDonald's brand, the stock is likely to continue to recover as macroeconomics improve and increasing profits allow the company pay down debt and refinance at lower interest rates.