Please ensure Javascript is enabled for purposes of website accessibility
Log In Help Join The Motley Fool
Free Article Join Over 1 Million Premium Members And Get More In-Depth Stock Guidance and Research
By Dan Caplinger - Jul 12, 2017 at 6:33AM

The drug company had a long streak of rising dividends that got broken in the financial crisis. Can it get back on the right foot?

Pfizer (PFE 0.61%) is one of the largest pharmaceutical companies in the business, and millions of patients have benefited from its medications over the years. From top-selling pneumococcal vaccine Prevnar 13 and epilepsy fighter Lyrica to treatments like blood thinner Lipitor and the well-known Viagra, Pfizer covers a lot of ground with its product lineup. Pfizer currently pays an attractive dividend, but longtime investors remember how the drugmaker burned them with a big dividend cut almost a decade ago and want assurances that it won't happen again. There's no guarantee that Pfizer won't cut its dividend in the future, but there are reasons to believe that the stock should be able to avoid that fate if the company chooses.

The rise and fall of Pfizer's dividend

Pfizer spent a long time as a Dividend Aristocrat, with a long track record of annually increasing its dividend. In February 2008, the company went ex-dividend on its 41st consecutive yearly boost to its dividend payments, giving shareholders a better than 10% gain to $0.32 per share. That move reflected the long rise of Pfizer as a pharmaceutical giant, benefiting from its growing portfolio of approved drugs and its impressive pipeline of candidate treatments for future approval consideration.

Yet in early 2009, Pfizer decided it would make an incredibly aggressive deal. The drug giant chose to acquire industry peer Wyeth in a $68 billion transaction at a time when capital was almost impossible to come by. As part of its plan to come up with the cash to finance the purchase, Pfizer decided to slash its dividend by half. That cost the company its status as a Dividend Aristocrat, but it believed that the opportunity to "produce the world's premier biopharmaceutical company" -- in the words of then-CEO Jeffrey Kindler -- was worth the dividend cut. 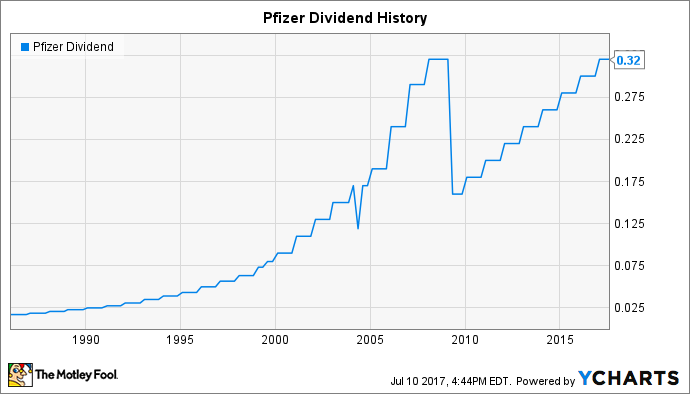 Since then, Pfizer has returned to being a model dividend citizen. Annual dividend increases have been fast and furious, and just earlier this year, the company matched its pre-Wyeth dividend rate of $0.32 per share.

Will Pfizer keep raising its dividend in the future?

Some investors have been concerned about the fact that Pfizer's dividend now requires all of the company's net earnings to pay. Late last year, its payout ratio climbed above its levels from 2008 and 2009. Investors hope for a big boost to earnings that could send the payout ratio down sharply, but there's no guarantee that will happen.

Dividend investors should also pay attention to the mergers and acquisitions front. There has been considerable consolidation in the pharmaceutical industry, and even after Pfizer's attempt to buy Allergan for $160 billion, industry analysts have speculated that Pfizer might rejoin the M&A arena with a big purchase in the near future. Conditions are much different in the capital markets right now, with plentiful debt financing available at attractively low interest rates. It's therefore reasonable to think that Pfizer wouldn't have to cut its dividend even if it did choose to make a big acquisition, even though those who know the drug maker's history will worry that it could repeat its past cut.

The health of Pfizer's fundamental business should stand as a mark in the company's favor. The drug maker has worked hard to evaluate the treatments in its pipeline at every opportunity in order to ensure that it isn't wasting resources and effort on drugs that won't pay off in the long run. By focusing on costs and realizing the fact that its limited financial resources require it to choose wisely on which drugs to promote, Pfizer is doing everything it can to keep its dividend sustainable.

Pfizer is at a crossroads right now with its dividend as it assesses its strategic options going forward. If it can keep growing as expected, then dividend investors shouldn't be terribly worried. The prospect for a major acquisition, however, could once again be a game changer for Pfizer -- just as it was back in 2009.