Apple's (NASDAQ:AAPL) services business is its second-biggest source of revenue after the iPhone. It's also the fastest-growing segment at Apple outside of other products. Last quarter, services revenue increased 18% year over year.

That revenue is largely driven by increases in app downloads. But Apple's second-largest source of services revenue comes from digital media downloads from iTunes, where it's losing market share to Amazon (NASDAQ:AMZN) and Comcast (NASDAQ:CMCSA), according to a report from The Wall Street Journal (requires subscription). 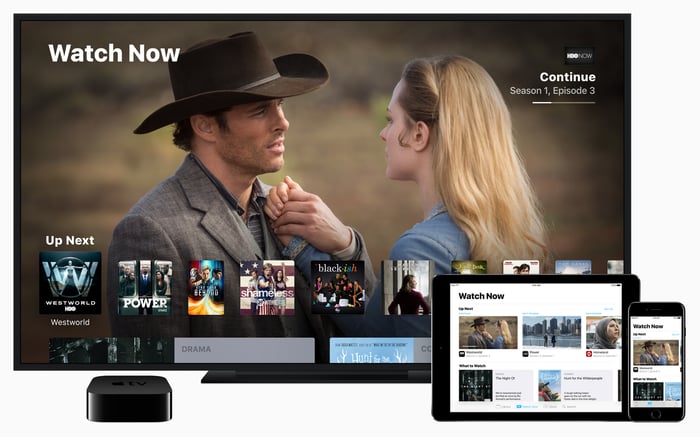 Back in 2012, Apple captured about 50% of the market for digital video downloads. That number has fallen to 20% to 35% this year as Amazon and Comcast make headway.

To be sure, the market for digital downloads is still increasing, which has allowed Apple to see increased video download sales. But growth was just 12% last year, according to PricewaterhouseCoopers, a slowdown from 2015. That ought to continue slowing in the future as companies like Netflix (NASDAQ:NFLX), Hulu, and Amazon attract more customers to streaming video instead of downloads.

Apple can benefit from an increase in subscription streaming services to help offset declining growth in video downloads. Last year, Apple revised its App Store revenue share policy to incentivize companies like Netflix, Hulu, and Spotify to sell their services through the App Store. Instead of taking 30% off the top every month, Apple reduced its take to 15% after the first year. It's unclear how big of an impact this had on Netflix, as large companies are often able to negotiate better rates with Apple, but as more subscription streaming services crop up, Apple is poised to take advantage to some degree.

Still, Apple is just one of many options for customers to sign up for streaming services. Many will go directly to Netflix or Hulu on their PC. Comcast started selling subscriptions to Netflix through its X1 platform last year. Amazon allows users to easily add channels like HBO or Showtime to their Prime subscriptions.

Apple's ability to dominate subscription sign ups the same way it did digital downloads five years ago is suspect at best.

It's no secret how Amazon and Comcast started taking share away from Apple. They both benefited from owning a popular platform.

Amazon's line of Fire tablets and Fire TV devices have become increasingly popular over the last few years due to their affordability and their integration with Prime. Apple's iPad sales have waned in recent years along with the overall tablet market. Amazon's tablets, meanwhile, now take close to 10% of the market compared to Apple's 25%.

Comcast's X1 set-top box is now in over 50% of Comcast video customers' households. Since X1 and Fire TV devices are already connected to a television set -- the optimal video viewing device -- an integrated digital video download service like Amazon Video or X1 is more convenient than other options like iTunes.

Apple may still be a market leader in tablets and set-top boxes (Apple TV), but its lead is declining as new competitors have entered the market in recent years.

Apple's services business is one of the biggest growth drivers for Apple going forward.

The company has already moved to a music-streaming service as digital music downloads fade into obsolescence with the growth of Spotify and other options. Apple Music quickly attracted 27 million subscribers. That's still well behind Spotify, the market leader, but it's a solid stream of recurring revenue to help replace the decline in digital downloads.

Apple's early attempts at streaming video haven't gained much traction with relatively low-budget shows like Planet of the Apps streaming in Apple Music. Apple may explore more premium streaming video content to help offset slowing growth of video downloads, but it faces much tougher competition than in music.

The primary music-listening device for many is the smartphone, where Apple enjoys a huge market share lead. But video begs for a bigger screen, where Apple doesn't have as big of an advantage. It's a tough problem for Apple to solve, but it will likely continue to push into streaming video in some form or another until it strikes something with consumers. It certainly has the cash to experiment.