Please ensure Javascript is enabled for purposes of website accessibility
Log In Help Join The Motley Fool
Free Article Join Over 1 Million Premium Members And Get More In-Depth Stock Guidance and Research
By Chris Neiger - Jul 13, 2017 at 9:40AM

The company has already expanded its efforts to sell OLED displays and memory chip manufacturing equipment.

Applied Materials' (AMAT 2.14%) share price has been doing pretty well lately. The stock has jumped 75% over the past 12 months and 33% over just the past six months. While this growth is good, investors are likely wondering if the company will be able to keep up the momentum in the future.

So let's look at two smart ways Applied Materials is investing in its future to help determine how the company is positioning itself in the coming years.

Applied Materials makes equipment that smartphone makers and consumer electronics companies use to manufacture semiconductors, displays, and other components. One huge way the company is using its manufacturing prowess to bet on the future is by pivoting toward organic light-emitting diode (OLED) display manufacturing. 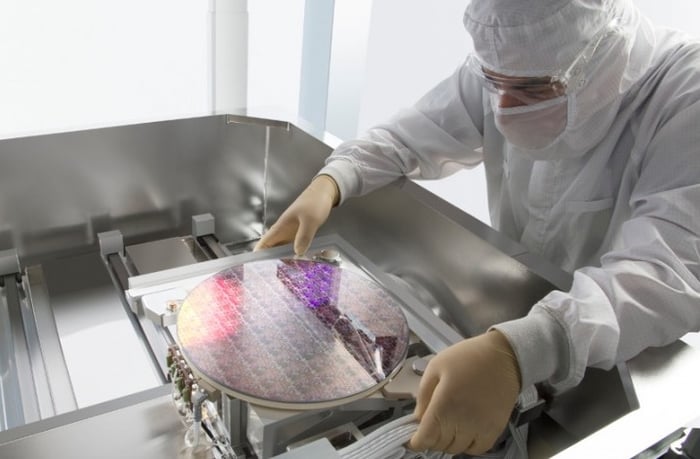 On its first-quarter 2017 earnings call back in May, Applied Materials CEO Gary Dickerson said,

"[W]e see investment in mobile OLED getting stronger as confidence in the adoption rates of OLED technology increases. Recent forecasts indicate that two-thirds of new smartphones could have OLED displays by 2021 and screen manufacturers are accelerating their investment plans accordingly."

Dickerson noted that his company has strong customer relationships in the display market and that Applied's equipment helps its customers overcome major technology challenges to manufacture OLED. The company believes these advantages could help Applied Materials take 30% to 40% of the total addressable display manufacturing equipment market in about two years, up from 15% right now.

It's worth noting here that Applied has grown its display revenue by nearly 20% each year for the past five years. That's been done largely through both mobile and television displays, and the conversion to OLED should help the company build out its future opportunities in display even further.

Applied believes the conversion from LED to OLED displays will be a sustainable market because the demand will be higher than supply for the next few years. Applied Materials CFO Robert Halliday said on the conference call that only 37% of the phones will have OLED displays in 2018, even though demand will be high, and that it will jump to 67% in 2021. "So really, OLED phone displays is kind of supply constrained, to be honest with you. So that's very sustainable," Halliday said.

Aside from its focus on future display technology trends, Applied is also gearing up for more customer demand in memory chip manufacturing. The company said that sales of memory chips are at record levels right now and that there's "robust investment" from the company's memory customers.

"The explosion of data storage requirements created by IoT, big data, AI and streaming video has only just begun," Dickerson said. He added that the need for more data generation from categories like autonomous cars will "dwarf existing applications within a few years."

Applied thinks it can benefit from the growth of memory chips across many sectors because of its strong list of clientele and its ability to help customers scale their manufacturing for technologies like 3D NAND (a type of flash memory).

Applied's increasing position in the memory space was highlighted last week when Morgan Stanley analyst Joseph Moore mentioned that improvements to memory (as well as the transition to OLED for smartphone displays) are much stronger than he previously thought, which led him to increase his price target for Applied from $47 to $52.

What all this means

Applied Materials brought in about 35% of its total revenue in the second quarter from its memory business and is looking to the market's continued strength to increase future revenues. Global investment bank Nomura says memory chip sales are in an "ultra-super-cycle" right now, which will cause sales to grow 56.7% this year to $116 billion.

Estimates for the display sales are increasing as well. Markets and Markets expects the OLED display market to be worth $44 billion by 2020 and grow at a compound annual growth rate of 16% between 2014 and 2020. Applied brings in just 11% of its total revenue from its display equipment right now, but revenue in this segment increased an amazing 109% year over year in the second quarter.

It's clear from managements' comments that the company is betting on OLED display and memory technologies for future growth, and if Applied Material's current performance in these segments is any indicator then the company's bets appear to be paying off already.