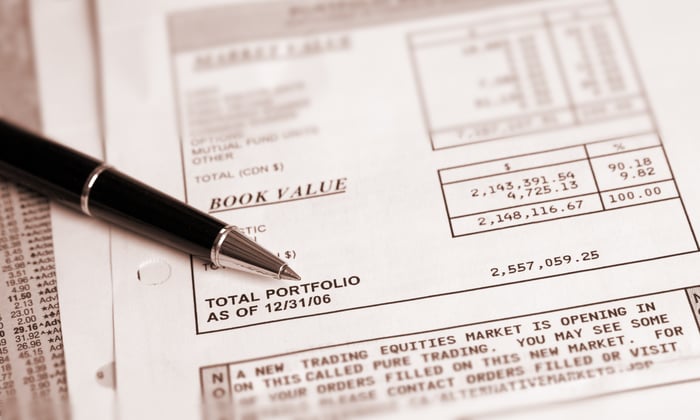 Wouldn't it be great, though, to know ahead of time that the news won't be too bad? To feel confident that, even if the market is down, your stocks probably didn't go down as much as everyone else's did? There actually might be a way to make that happen. I've put together a stock screen searching for stocks with the following attributes that may ease your fears over checking your portfolio:

I think the following three stocks fit the bill. Go ahead -- read on and see if you agree.

Banco Santander-Chile (NYSE:BSAC) isn't exactly a household name here in the United States. It's pretty well known in South America, however, where Banco Santander-Chile is Chile's largest bank. It's also a pretty big bank, period, boasting a market capitalization in excess of $12 billion.

You might expect such a large bank to have a pretty stable business, and you'd be right. In fact, Banco Santander-Chile's stock boasts a beta of 0.72, indicating that historically, at least, it's been about 28% less volatile than the average S&P 500 stock. And it's a generous dividend payer, yielding 4.1%, or nearly twice the average dividend payout of S&P 500 stocks.

In terms of price, Banco Santander-Chile costs 16 times trailing earnings. That seems reasonable given the size of the dividend, and the fact that analysts polled by S&P Global Market Intelligence see the stock growing earnings faster than 13% annually over the next five years. Between the dividend and the earnings growth, Banco Santander-Chile offers investors better than a 17% expected return and gives the stock a total return ratio of just 0.9.

Banco Santander-Chile's second-quarter earnings are due out on July 28, so in just a couple of weeks we should know even more about how well this bank is delivering on that promised total return.

Read that name too fast, and you might think that Banco Bilbao Vizcaya Argentaria (NYSE:BBVA) is a close neighbor to Banco Santander-Chile, perhaps even as close as Argentina. In fact, though, this is a Spanish bank -- and the second largest bank in Spain.

As you might expect, that means it's a much larger bank than Banco Santander-Chile -- $55 billion in market capitalization. But despite its size, Banco Bilbao Vizcaya Argentaria seems pretty light on its feet. S&P Global figures show analysts projecting better than 16% annualized growth for Banco Bilbao Vizcaya Argentaria over the next five years -- even faster than the smaller Chilean bank.

In exchange for this faster growth rate, investors must take on a bit of volatility risk (but at 0.81, the stock's beta is still below average) and give up a bit of dividend yield as well. Banco Bilbao Vizcaya Argentaria pays a 4.6% dividend based on its payments over the past 12 months, which is well above average for large U.S. S&P 500 companies. Still, the combination of growth plus dividend on this one comes to a likely total return of 18.3%, which relative to the stock's cheaper 13.2 P/E ratio works out to a total return ratio of only 0.7.

That alone suggests that Banco Bilbao Vizcaya Argentaria could be an even better bargain than Banco Santander-Chile.

But can we do even better than that? If you like dividends and don't mind investing in a non-bank, maybe. Our final stock to look at today is a horse of an entirely different color -- in-cinema advertiser National CineMedia Inc. (NASDAQ:NCMI).

National CineMedia presents "FirstLook" commercials to movie theater early arrivals. The company also displays ads in movie theater lobbies and has expanded to begin "selling online and mobile advertising through our Cinema Accelerator digital product to reach entertainment audiences beyond the theater." But the company's big advantage is still FirstLook. With moviegoers sitting in their seats, waiting for the movie to begin, National CineMedia has a captive audience of commercial-watchers for as many as 20 to 30 minutes before the main event.

It's a profitable business, earning about $25 million over the past year, which gives National CineMedia a P/E ratio of about 18.5 -- around 28% cheaper than the average stock on the S&P 500. It's a business that generates a lot of cash -- $155 million over the past year, which is about six times reported income and implies that the stock could be a lot cheaper than it looks. And it's apparently a pretty stable business, too. National CineMedia boasts a beta of just 0.52, which implies that it's roughly half as volatile as the average stock.

That said, National CineMedia stock has been pretty volatile over the past year, losing about half its value. The upside is that the stock now pays a huge dividend relative to its stock price -- about 12.1% -- giving investors a chance to lock in a very healthy dividend yield, and also profit from any rebound in the price of the stock itself, as value investors gather to gorge on the stock's immense free cash flow.