Brazil is an emerging economy whose stock market offers lots of potential for investors with long time horizons. Instead of investing through individual stocks, the iShares MSCI Brazil Capped ETF (NYSEMKT:EWZ) index fund can be a smart investment in the performance of the overall Brazilian economy, without too much exposure to any one stock.

Why use an ETF to invest in Brazil?

Like most other emerging markets, Brazil's stock market can be quite volatile. Take a look at the iShares MSCI Brazil Capped ETF's performance since its inception in 2000. During the mid-2000s, the fund increased tenfold, rapidly crashed during the Great Recession, and has fluctuated quite a bit since then. 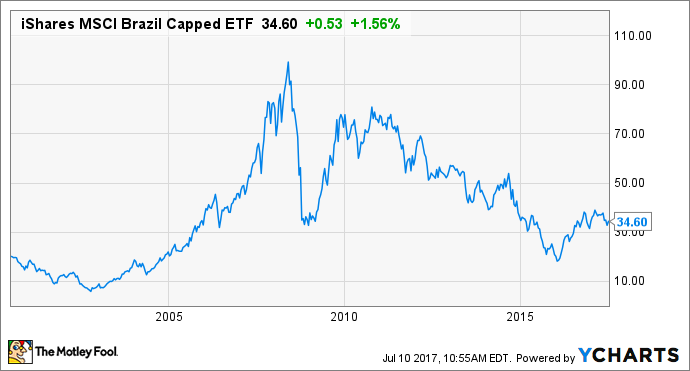 My point is that Brazil's stock market is volatile and risky enough without adding the risk that comes with evaluating and selecting individual stocks. In addition, individual stocks in emerging economies can be quite difficult to evaluate. In other words, an ETF allows you to invest in Brazil without depending too much on any single company. 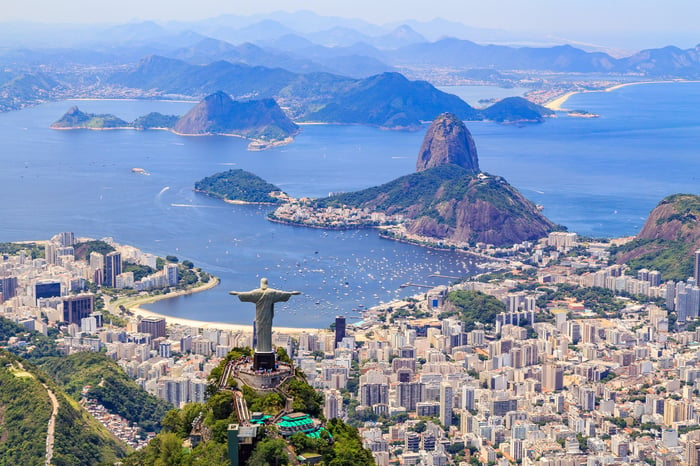 There are several ETFs that track Brazilian stocks, but the iShares MSCI Capped ETF, with about $6 billion in assets, is by far the largest.

The fund tracks the MSCI Brazil 25/50 index, which is named for the caps it puts on the exposure to the largest companies. Specifically, no single stock can make up more than 25% of the index's weight, and all of the companies that each make up more than 5% of the weighted index cannot combine to exceed 50% of the overall weight in the index.

At the moment, these caps aren't an issue. The largest holding in the index, Itau Unibanco Holding, makes up 11.7% of the total, and only three stocks (Itau, Ambev, and Bank Bradesco SA) have weightings above 5% and combine for 28.4% of the index. However, this does provide ongoing protection from the fund and its investors becoming too dependent on any single company's performance.

Although this index is intended to track the overall performance of Brazil's market, it's important to note that the fund holds just 58 different stocks – a far cry from the 500 stocks that make up the S&P 500 index that is generally considered a benchmark of U.S. performance.

About 36% of the fund's assets are invested in financial-sector companies, like the two big banks in the top three. This is by far the largest allocation to a sector, and other major sectors include consumer staples (15.6%), energy (11.6%), and materials (9.6%).

Finally, the gross expense ratio of the ETF is 0.63%, which means you'll pay $63 in management fees per year for every $10,000 you have invested. This is relatively high as far as index funds go, but is still below-average for mutual funds and ETFs as a whole, and in my opinion, it's worth the cost if you want broad exposure to this high-potential economy.

Emerging markets can be exciting and lucrative long-term investments, but individual stocks in these countries can be difficult to evaluate. Instead of investing in individual companies, an investment in Brazil's overall economic future can be the smartest way to get exposure in your portfolio.