With significant near-term opportunities like digital headsets, as well as longer-term trends including the smart home and voice biometrics, which are right in its wheelhouse, Cirrus appears to be preparing for another significant growth spurt. 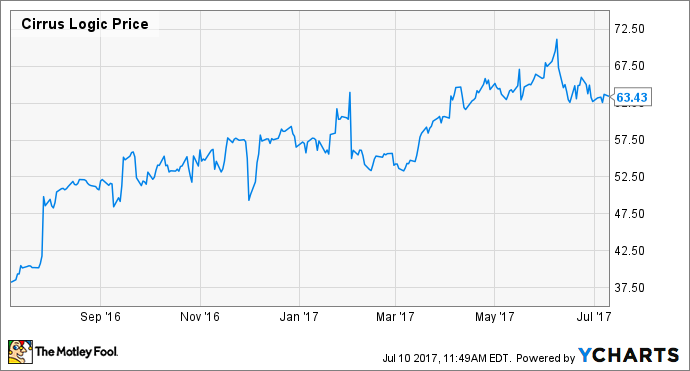 Cirrus just completed a fiscal year that saw revenue increase by 32% to $1.5 billion, which was the company's third straight year of 25%-plus revenue growth. Additionally, Cirrus improved its gross margin to 49% (compared to 47% the previous year), generated $369.8 million in cash from operations, and grew its GAAP (unadjusted) earnings per share by more than 100%. In short, it was a fantastic year, with the company benefiting from the emerging digital headset market, and getting more of its components into premium and midtier Android devices. The outlook from here is pretty solid, too, with Cirrus guiding for Q1 2018 revenue of $300 million to $340 million -- which represents 23% growth at the midpoint -- along with gross margin of 48% to 50%. However, the company did note that for full-year fiscal 2018, it expects only "modest revenue growth." While that may sound like Cirrus' growth party is nearing an end, looking beyond this year, there's still plenty to get excited about.

On the company's most recent conference call, President and CEO Jason Rhode said the company is seeing "accelerating interest" from a variety of device categories in Cirrus' high-performance, low-power solutions for audio and voice. Let's run through a handful of these opportunities that could turn into the next big thing for Cirrus.

A golden age for headsets is coming

Cirrus sees substantial opportunities in the headset market as Android original equipment manufacturers (OEMs) continue to transition from a micro-USB connector to the USB-C interface. This change creates the potential for improved sound quality with USB-C-powered digital headsets. The first such headset with Cirrus' acoustic noise cancellation technology is already available, and the company says it's working with major customers on additional headsets that will launch during the next 12 months. While this will contribute some revenue this fiscal year, this appears to have the makings of being a much bigger growth driver down the road as Cirrus estimates the total headset market at 1.5 billion units per year.

Soon, you'll use your voice to unlock your phone

The company is also developing solutions for the voice biometrics market. For instance, Cirrus is working on a way for your device to positively identify you through your voice. The focus here isn't on recognizing what the user is saying, but rather on confirming that the "right" user is speaking, to prevent unauthorized users gaining access to a lost or stolen device. Cirrus says it believes this opportunity should be just as large as the fingerprint ID market, which Rhodes called "large, relative to the size of the company."

A growing role in the smart home

Perhaps the largest long-term opportunity for Cirrus is the smart-home market, with new products popping up all the time -- from digital assistants to TVs -- that use voice for the primary interface. In early July, Cirrus unveiled a voice capture development kit it developed with Amazon, aimed at manufacturers who want to create Alexa-enabled products. Smart-home products like these should open up a world beyond phones and headsets for Cirrus that could help it expand way beyond Apple -- which Cirrus relied on for 79% of its revenue last year.

Good things come to those who wait

As you might imagine, developing products like these takes time, even more so when you're developing them for a specific customer with its own exacting requirements. So when Cirrus says to expect modest revenue growth this year, I believe that's only because many of the products above won't contribute meaningfully until the following year (and beyond).

The company says it's never had so many irons in the fire, and with 71% of its employees in research and development, Cirrus is obviously serious about innovation. I haven't even mentioned Cirrus' major investment in its nascent microphones business -- the potential of which the company estimates at hundreds of millions, if not billions, of units. So while this year's growth may be muted compared to the previous 12 months, I believe Cirrus' opportunities are still immense for investors willing to take the long view.