Nearly everybody has some form of debt, be it a mortgage, a car loan, or a stack of credit card bills. So the question for any investor becomes: does it make more sense to put one's money toward paying down those debts, or to invest the money?

The point of investing

Investment options come in a thousand different flavors these days, but they all share the same goal -- to make money. The returns you'll get over long periods of time will vary based on the type of investment you pick. For example, the average annual return on stocks for the past 50 years was around 7%.

The price of debt

Like investments, debt comes in a wide range of types, but all debt costs the borrower something. After all, that's the reason why some person or institution is lending you the money in the first place: they expect to get something back in return for letting you use their money. For most debt, this reward comes in the form of interest. But the amount of interest you'll pay on a debt can very from 0 to as much as 79.9% per year (in the case of one subprime credit card). That's a pretty huge range! 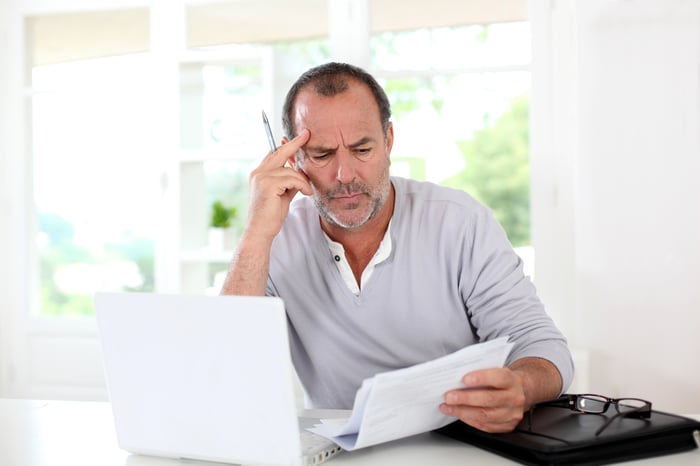 Where would you get the best return?

The question of whether to put your money into investments or paying down debt revolves around which option would produce the best return on your money. When paying down debt, the return you get is the interest charges you won't have to pay in the future because you've reduced the principal balance.

For example, let's say you have $5,000 in credit card debt and are being charged interest at a rate of 14% per year. If you paid just the minimum payment of 2% of the balance, it would take over 29 years to pay off the entire debt and you'd end up paying $6,555 in total interest. But if you threw an extra $100 per month at that card, you'd be done with your debt in three and half years and would pay only $1,173 in total interest. That means you'd save $5,382 by paying down the debt faster, so your return on spending that extra $100 per month is $5,382.

Figuring out the best return

Before you can decide on the best use for your money, you need to know exactly how much you owe and how much you're paying on each of those debts. Next, figure out just how much you can set aside per month either for investing or for making extra debt payments. Finally, calculate what your return would be if you put that extra money on your highest interest debt (a debt calculator can help you do the math here). If it's not as good as that average 7% stock return, then by all means stick to minimum payments on your debts and channel all your extra money into investing.

In some situations, paying debt may be the higher priority even if your debt is at a fairly low rate of interest. For example, if you have a large amount of debt relative to your income, this heavy debt load will push down your credit score. That could in turn mean that you'll be offered less favorable interest rates on any other debt you need to acquire. And if you have a very high amount of debt, then just making the minimum payments may be consuming quite a lot of your income. In that situation, it makes more sense to try to get rid of at least some of that debt as quickly as possible. Once your debt load is under better control, you can go back to putting your money into your investments.

Is it Better to Invest or Pay Down Debt? @themotleyfool #stocks Next Article
Current