Please ensure Javascript is enabled for purposes of website accessibility
Log In Help Join The Motley Fool
Free Article Join Over 1 Million Premium Members And Get More In-Depth Stock Guidance and Research
By Daniel B. Kline - Jul 16, 2017 at 6:22AM

The company has taken a bold step to remain a good place to work.

Generally considered a good place to work that treats employees well, Starbucks (SBUX -0.01%) has faced recent backlash from some of its baristas over staffing levels in stores. Though employee discontent at Starbucks has been more of a quiet undercurrent than a full-on staff outburst, it can undermine the chain's business model. Even as it has added technology to assist with order taking and payment, Starbucks still has a barista-driven business.

Employees in their iconic green aprons greet customers as they come into stores and forge connections that drive repeat business. Baristas serve as the face of the company, and in reality, they are the company to consumers.

Starbucks has always understood this, and from its earliest days, has used the term "partners" to describe its employees. Baristas get health insurance, stock grants, above-average pay for the restaurant industry, and even the opportunity to go to college for free.

Despite those things, barista discontent has risen, and Starbucks CEO Kevin Johnson wants to address any concerns. To make that happen, he wrote a letter to all of the chain's employees, where he reiterated its commitment to partner success while also naming the chain's first chief partner officer to make sure employee interests are represented at the company's highest levels.

"It is you, my Starbucks partners around the world, who are responsible for our success, and that success comes because you are in service to others," he wrote. "As CEO, I consider myself in service to you." 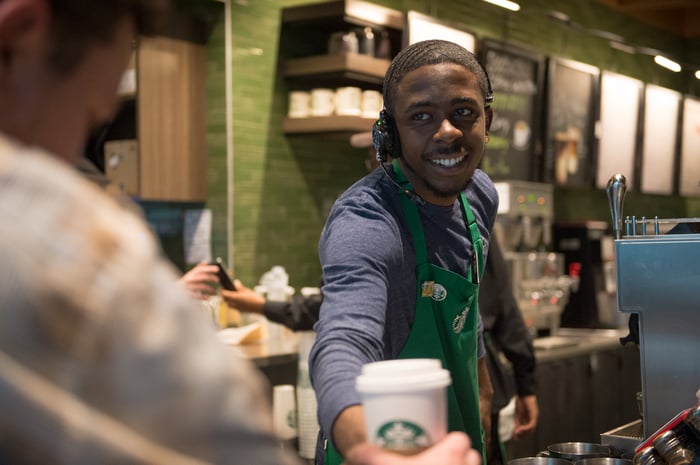 Johnson has been listening to employee complaints through a variety of channels. Starbucks holds partner roundtables, open forums, and a proprietary in-house system. The CEO wrote that he has asked his leadership team to "ensure they, too, have the right tools to engage with their partners so they may understand what is most relevant to you, as well as to your families."

To make sure those concerns are properly addressed going forward, Johnson has changed the company's leadership structure, adding the position of Chief Partner Officer. He named Lucy Lee Helm, an 18-year company veteran, who already served as a member of senior leadership as general counsel, to the position -- which will include oversight of Starbucks' Partner Resources Organization (PRO).

Lucy is ideal for this role. During her years at Starbucks, she has held a variety of important positions that have, in sum, given her a comprehensive understanding of Starbucks operations and our unique culture. As many of you already know, to work with Lucy is to understand her profound passion for partner advocacy. She started our very own Starbucks Global Inclusion Council and has sponsored multiple Partner Networks including the Women's Development Network, Pride Network, and Access Alliance Network.

The move does not represent a major change for the organization, but it does put a single person with a C-suite title as the point person for partner issues. It's an effort that could lead to real changes in how the company operates, as far as its employees go. It could lead to more staffing during busy hours, which has been a chief complaint of some baristas, and it may lead to other tweaks or changes.

In making this move and taking a well-known company leader from one important position and putting her into a job advocating for partners, Johnson sends a strong message to the company's employees. That's also an important message for investors to hear because it shows that the new CEO values the company's culture, which has given it an edge when it comes to recruiting workers.

As the company expands its bet on higher-end coffee experiences, its baristas will become even more important. The chain plans to open 1,000 or more Reserve stores, while adding Reserve bars to up to 20% of its global locations by 2021. At those locations, and the handful of Roasteries it plans to add around the world, the barista is an even more focal part of the presentation.

Like a wine sommelier, the Starbucks staff member at these fancier stores with pricier offerings guides the customer to their selections. If that worker is happy in his or her job, it's much more likely that he or she will perform it well.

Johnson has effectively acknowledged that the company can always do better. That's not something many businesses do, especially in an area where they generally have a good reputation. Starbucks, its employees, and its shareholders will benefit from having Helm in this position, as partner concerns will be easier to address with a clear person in charge of resolving them.