TrueCar, Inc. (NASDAQ:TRUE) has gotten itself back on track after a nightmarish 2015, and it has since rewarded loyal shareholders brave enough to hang on during the two-year roller-coaster ride. And while investors might be hesitant to buy in after its run-up over the past year and a half, let's consider two reasons the company is healthy and may have more upside left -- and also one concern for long-term investors to keep in mind.

One of the pillars of TrueCar's financial success is its affinity groups. Basically, TrueCar powers and operates partners' car-buying programs, and its affinity-group partners include USAA, Chase, American Express, Consumer Reports, AARP, and Sam's Club, among many others. These are huge business partners for TrueCar, and unlike with individual customers, they often come with medium- to long-term contracts.

For example, TrueCar's most important affinity partner is USAA. In the quarter ended March 31, USAA generated 30% of all units purchased from TrueCar -- but that's both a good and bad thing. On the good side, USAA owns nearly 10% of TrueCar's outstanding common stock, which means it's invested in achieving a successful partnership. Moreover, its contract with USAA runs through Feb. 13, 2020, locking in a substantial partner for the near term. But on the bad side, as USAA represents a huge part of TrueCar's business, it would be devastating if the partnership were ever to dissolve.

Affinity groups also offer a catalyst for TrueCar, as inking a huge partner, even one that doesn't size up to USAA, could still immediately and positively affect the top and bottom line for the company and its investors. These potential catalysts are out there; TrueCar just has to make them happen. 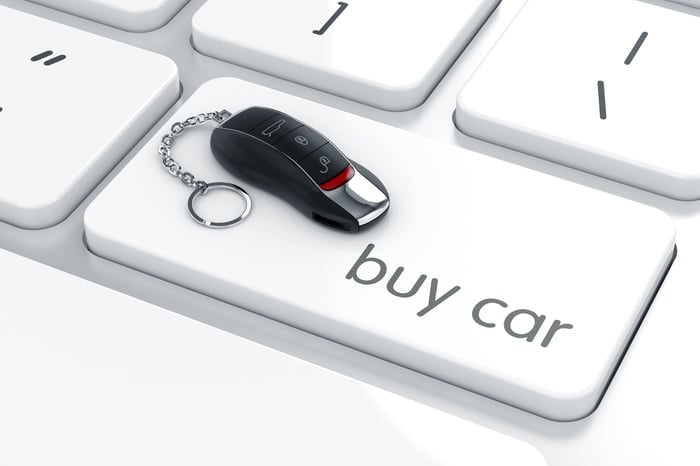 As TrueCar plays a middleman between consumers and dealerships, it has to walk a fine line to keep both happy -- and that's not always been easy for management. But one thing is for sure: Since CEO Chip Perry came on board, things have been on the mend. AutoNation (NYSE:AN), which is TrueCar's largest dealership-group customer, came back on board full scale after the two had a rather public breakup a couple of years ago.

Perry's first task was to fix the tension between TrueCar and dealerships. After all, those dealers pay the bills. As part of the company's pledge to dealerships, TrueCar updated its sales-analyzer tool to help dealerships use available data to make better decisions to complete more sales. It also aired an ad campaign highlighting used cars and enabled dealerships to better add content and marketing information to their presence on TrueCar's website.

After the substantial progress made to help dealers with their concerns and frustrations, TrueCar's network of dealerships has grown more than 24% quarterly over the prior year, each of the past three quarters. Its total count sits at 11,734 dealership franchises and can reach more consumers than ever. With those fixes in place and increasing website foot traffic, TrueCar has been able to post three of its highest adjusted-EBITDA results over the past three quarters, and its stock price has consistently followed its progress higher over the past year and a half. 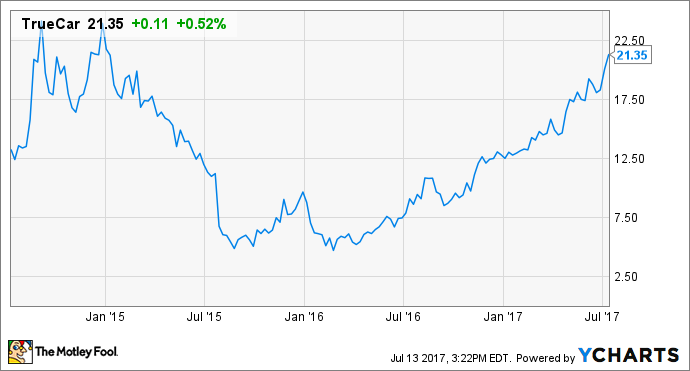 The automotive industry about to change drastically as we push toward electric and driverless vehicles. Slowly, and over the long term, as driverless cars and transportation-as-a-service becomes more prominent, it's very likely that vehicle ownership will decline. And that trend will probably come with a smaller number of vehicle transactions between consumers buying new and/or trading in vehicles. Vehicle transactions are obviously the core of TrueCar's business, and whether the company can adapt and evolve to the coming changes is a long-term concern for investors to keep in mind.

2 Reasons TrueCar, Inc. Is Still a Buy After Rising 150% @themotleyfool #stocks $TRUE $AN Next Article
Current