Up until a few months ago, there weren't a whole lot of reasons to be hopeful about Sunoco's (NYSE:SUN) stock. Then, management announced a major deal that has the potential to be a reset button for the company: It's transitioning away from running filling stations and convenience stores, and focusing instead on its bread-and-butter business of wholesale fuel distribution.

The sale of most of the retail segment of the company will leave the company with a large pile of cash at its disposal. Here are a few quotes from the company's most recent conference call that outline some of its most pressing issues, and how it plans use those new funds to alleviate them. 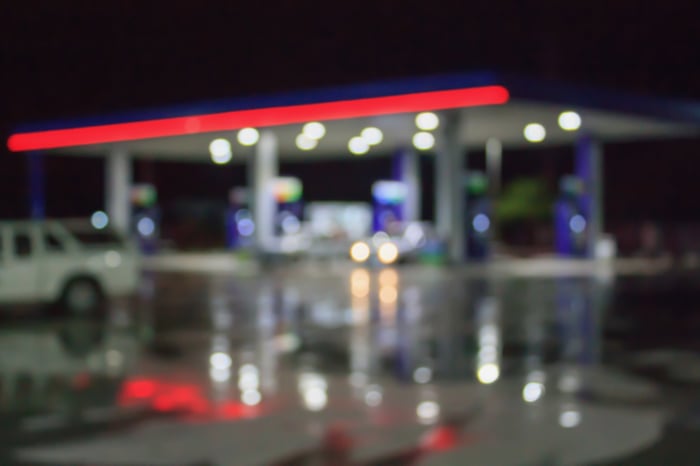 For a few quarters, Sunoco's distributions to shareholders haven't looked too stable, and the most recent was no exception. CEO Bob Owens tried to put the most positive spin possible on it.

This distribution was a 1% increase from Q1 of 2016 and resulted in a 0.74x coverage ratio for the first quarter and a 0.88x coverage ratio on a trailing 12-month basis. As a reminder, the first and fourth quarters are seasonally the weakest quarters of the year for our business, year in, year out. In the near term, we are comfortable keeping our coverage below the 1x. Long term, our goal is to manage to a 1.1 coverage ratio after the retail asset sales process is complete, aided by a combination of growing cash flow via acquisitions or reducing our distributable cash flow obligations through the repurchase of units, either in the open market or from Energy Transfer [Equity].

In three of the past four quarters, Sunoco hasn't been able to cover its distribution with cash coming in the door. Even factoring in that Q1 and Q4  are always its weakest quarters, the company is still well short of what it needs on a trailing 12-month basis. This should send up a red flag for investors despite management's comfort with a low distribution coverage ratio. It's probably no surprise, then, that its current distribution yield is north of 10%.

Last quarter, the company inked a deal to sell almost all of its owned and operated convenience stories to the parent company of 7-Eleven for $3.3 billion. The deal also makes Sunoco the exclusive wholesale fuel supplier for those facilities for the next 15 years. According to Owens, this will change the company's revenue structure for the better.

This is a major step and a strategic shift toward MLP-qualifying businesses. Concentrating the Sunoco business model around simplified wholesale business provides significant scale and cost efficiencies. Retail divestments will immediately improve Sunoco's financial profile and sets the stage for strategic optionality to take advantage of consolidation opportunities in a fragmented wholesale market or to move into new markets and qualified businesses with stable cash flows.

Anyone who has followed this company for a while has to be a little skeptical about management's apparent excitement at exiting the retail business. It wasn't so long ago that management was touting the fuel retail and convenience store business as an area ripe for consolidation and growth.

It would appear this sale was less a strategic decision, and more a move made out of necessity to preserve the company's long-term solvency --  especially since it was already under pressure from its creditors, who late last year compelled it to develop a debt reduction plan after it violated some of its debt covenants.

Putting that cash to work

How effectively Sunoco uses the proceeds from this sale will likely determine the course of the company for several years. CFO Thomas Miller laid out the priorities:

As for the use of proceeds, we will reduce debt to a level where our ongoing leverage is between 4.5x and 4.75x adjusted EBITDA. The remaining proceeds will be used in some combination of a reduction in the perpetual preferred securities in common units or to some -- to fund accretive acquisitions. We will target a 1.1x distribution coverage ratio.

The idea of buying back shares may seem a bit strange, especially for a master limited partnership that uses share issuance as a way to raise capital. The thing is, though, that total cash coming in the door has declined significantly, making its current payout unsustainable. The only way to reduce its payout expenses without cutting the distribution is to shrink the number of outstanding shares receiving a distribution. If there is enough cash to reduce its debt to its target range and reduce share count to meet its coverage ratio target, then the company should be OK.

Debt as it stands today

The only flaw with that plan is that the company's current debt load is incredibly high. Here's where Miller said the company stood at the end of the quarter.

SUN ended the quarter with total debt-to-adjusted EBITDA, calculated in accordance with our credit agreement, of 6.31x. Total debt at March 31 was $4.3 billion, which includes $761 million drawn under the revolving credit facility. We also had $21 million in standby letters of credit, leaving the unused availability on the credit facility of $718 million at the end of the quarter. SUN's weighted average cost of debt at March 31 was 5.1%.

Keep in mind, though, that this debt-to-EBITDA ratio is based on what the company is making before the asset sale. Afterward, that ratio will be much worse. The company has $4.3 billion in debt as it stands today, so a large chunk of that incoming cash will have to go toward debt reduction before any can be put toward reducing share count.

Making the next "right deal" soon

One question analysts had for Sunoco's management was whether its plans could change if, say, some assets that fit the company's new model were to go on sale. According to Owens, the idea of waiting around for a deal probably isn't the best thing, considering its cash shortfalls. However, if a game-changing opportunity were to arise in the near term, then acting on it would be an option.

I think, concurrently may be a bit strong, but almost concurrently is the way I would answer it. And I think, in the prepared remarks, we said that with this inflow of cash, we will look at alternatives that would be both M&A type or, from a financial restructuring standpoint, obviously, unit buyback, and we will do what is most prudent at that point in time.

It's hard to determine what the best course forward for this company would be. Management shot itself in the foot by over-pursuing growth, and using too much debt to fund it. Now it's stuck with few options, and they don't sound great at all.