If you go back to 1983 and look at the 100 largest banks in the country, only 23 of them remain today. Of those, M&T Bank (NYSE:MTB) has produced the best total shareholder return.

M&T Bank's stellar performance isn't relegated to history. It remains the best-run big bank in the United States today, three and a half decades after chairman and CEO Robert Wilmers took the reins, according to Bank Director magazine's 2017 Bank Performance Scorecard. 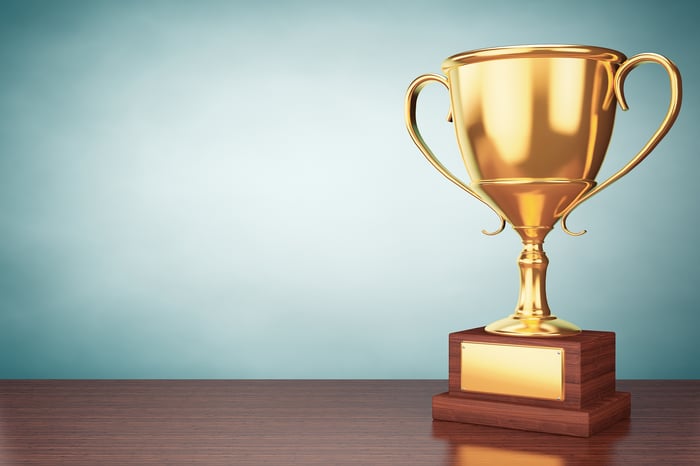 The scorecard separates banks into categories based on the size of their balance sheets. M&T Bank is in the largest category, banks with more than $50 billion in assets, otherwise known as systemically important financial institutions.

Banks are then scored on five metrics:

M&T Bank didn't rank first in any of these categories. Its highest ranking was fifth, for both return on average assets and the ratio of net charge-offs to average loans.

But the Buffalo, N.Y.-based bank nevertheless ranked first overall by consistently performing at the top of its peer group across all five metrics. Indeed, its lowest ranking, 13th for return on average equity, is more a function of leverage than anything else, given M&T Bank's fifth place ranking on return on average assets.

To anyone familiar with M&T Bank, its performance on Bank Director's latest scorecard shouldn't come as a surprise. Wilmers is the Warren Buffett of banking. In fact, not coincidentally, Buffett is one of M&T Bank's biggest shareholders, by way of Berkshire Hathaway (NYSE:BRK.A) (NYSE:BRK.B).

It's no exaggeration to say that Wilmers and M&T Bank have made a lot of people rich, not just Berkshire Hathaway. Anyone who invested in M&T when Wilmers took over three and a half decades ago would have seen their stakes increase from a (presumably) split-adjusted price of $1.34 per share on March 31, 1983, up to $166 a share today.

That's an impressive performance, and as Bank Director's latest survey shows, M&T Bank is nowhere near done outperforming its rivals.