Please ensure Javascript is enabled for purposes of website accessibility
Log In Help Join The Motley Fool
Free Article Join Over 1 Million Premium Members And Get More In-Depth Stock Guidance and Research
By Daniel B. Kline - Updated Jul 17, 2017 at 9:28AM

The company is looking for ways to leverage its brick-and-mortar locations.

Some brick-and-mortar retailers seem fascinated with the idea that people want to drive to their stores, but don't actually want to leave their cars in order to pick up their order. It's a concept Wal-Mart (WMT 0.85%) has slowly added to its grocery business and one Target (TGT 1.19%) has already tried once, then dropped. Now, despite the initial failure, the fast-evolving department store has begun testing curbside pickup once again. 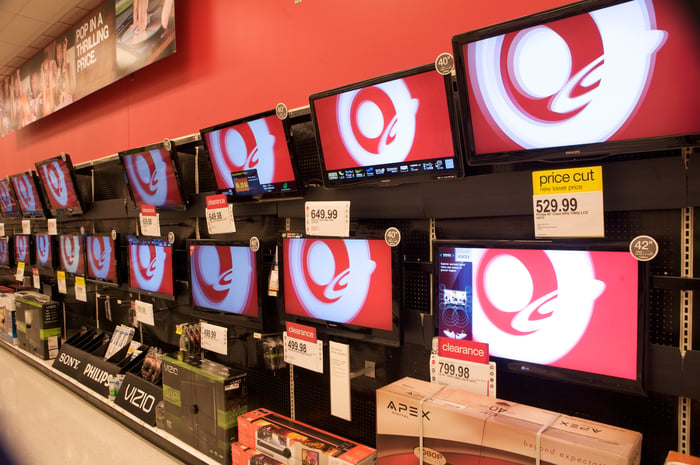 The department store chain has begun very limited testing of a new curbside pickup program, according to the Minneapolis Star Tribune. Under the new version of the program customers place an order via computer and then make their way to the store. Once they arrive, the customer parks in a designated parking area and store employees bring their order to their vehicle.

Unlike Wal-Mart's efforts, which have been focused around groceries, Target's test involves shelf staples and other products currently eligible for its in-store pickup service. For now, the program is only available to Target employees involved in the pilot test. Going forward, the company hopes to offer it to the general public, Target spokesman Eddie Baeb told the Star Tribune.

"We certainly see the potential in a broader rollout," he said. "In the coming months, we hope to make it guest facing."

Brick-and-mortar retailers are trying to leverage the one advantage they have over digital-only rivals: physical stores. The advantage of having stores is that people can get immediate gratification.

The problem is that online retailers, specifically Amazon (NASDAQ: AMZN), have steadily decreased how long it takes an order to arrive. The online shopping leader has made two-day shipping a standard and it offers one-day delivery for a modest fee on many items. In some markets Amazon even offers one- and two-hour delivery.

Fast delivery times plus a customer not having to leave the comfort of their home removes incentive for people to visit stores. Because of that, brick-and-mortar chains have tried to come up with ways for shoppers to have their cake and eat it, too.

Wal-Mart specifically has increased its efforts to facilitate in-store pickup of online orders with its new Pickup Tower. Business Insider describes the towers as large kiosks; "To use the tower, customers scan a barcode on their purchase receipt. Within 45 seconds, a door on the machine opens, and the items appear on a conveyer belt." The tower and Target's designated parking spots aim to take the confusion out of where to pick up digital orders in their stores.

As Amazon, Wal-Mart, and maybe even Target speed up how fast online orders are delivered to customers' homes, the value of wringing incremental convenience out of stores becomes smaller. It's mildly more convenient to pick up an order curbside than it is to leave the car and pick it up in the store, but both remain much harder than letting the post office or another delivery service do the work for you.

This isn't fast-food chains offering online ordering. That service solves a number of actual pain points. It eliminates waiting in line and it removes the possibility of human error in order taking. A digitally ordered half-caf, soy, two-pump, sugar-free vanilla latte is easy for a human to mishear or enter into the system wrong, but apps are generally infallible.

Curbside pickup targets people who want their item or items right away, but don't want to leave their vehicle to get it or them. It's easy to see the value in that with groceries, a category still dominated by supermarkets and physical retailers. Those are large orders that take significant time to gather.

Perhaps Target intends to add groceries or even its whole store to its online pickup program. That's easier said than done given that inventory systems have a hard time tracking items in real time. That means that while a store may show an item in stock in-store customers could empty the shelves before the digital order gets picked.

Technical problems are solvable, but it still seems like curbside pickup (really in-parking-lot pickup in this case) may only have limited demand.

Target deserves credit for experimenting, but the potential reward here seems small. The chain should work to further refine ordering online and picking up in store as Wal-Mart has done, but curbside may be a step too far.