The new devices included a whole host of upgrades and new features like super-smooth ProMotion displays, a ridiculously fast A10X chip, slimmer bezels (at least in the case of the 10.5-inch model compared to the previous 9.7-inch version), updated cameras, and a lot more. 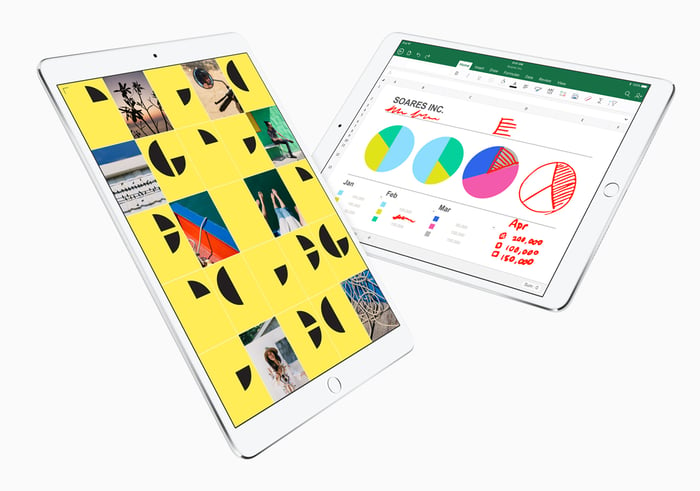 The new iPad Pros are nice devices, and they easily represent the pinnacle of the modern tablet computer today.

Although I've been quite tempted to order a shiny new 10.5-inch iPad Pro to replace my current 9.7-inch iPad Pro, I've decided -- with the help of significant self-control -- to hold off.

The next one is probably going to be a game-changer

While the new 10.5-inch iPad Pro represents a significant upgrade from my current 9.7-inch iPad Pro, KGI Securities analyst Ming-Chi Kuo reported last year that the 2018 iPad could be a true game-changer.

Kuo calls the 2018 iPad "revolutionary" and expects it to include "radical changes in form factor design & user behavior" due to the use of a "flexible AMOLED panel."

Considering that iPads are rather expensive devices (a new 10.5-inch iPad Pro would run me $879 for a 256 GB model with cellular capability), I don't want to drop that kind of money on a new iPad this year when I strongly suspect next year's model will be such a huge step forward.

Plus, I don't use my iPad Pro that much

Longtime readers know that I've upgraded my iPhone annually since buying my first iPhone (a gold iPhone 5s) in September 2013.

I bought an iPhone 6s device with the full expectation that the iPhone 7 series would be a sizable step forward, and I bought the iPhone 7 knowing full well that Apple was planning to launch an OLED-based iPhone this year. I didn't feel any hesitation about upgrading my iPhone each of those times.

The reason I didn't is simple: My iPhone is an essential part of my daily life. It gets a lot of use, and whenever Apple upgrades its iPhones, I can usually appreciate many of those upgrades.

My iPad Pro, on the other hand, doesn't get anywhere near as much use as either my iPhone or my desktop personal computer does. It's a great device when I'm using it, but for work, gaming, and intensive multitasking, my desktop is my first choice.

For casual web surfing, photography/videography, phone calls, emails/text messages, social media, and so on, my iPhone is my first (and, in some cases, only) choice.

If I used my iPad Pro anywhere near as much as I do my desktop or my iPhone, I'd seriously consider annual upgrades. However, since I don't use it that much (and I suspect that in the era of large-screen smartphones and increasingly tablet-like notebook personal computers, I'm not alone), I'm not as compelled to fork over a significant amount of cash for each new model.