There's a tendency to give Amazon.com (NASDAQ:AMZN) the benefit of the doubt whenever it looks to enter any new market, because the company's track record of disruption across industries speaks for itself. For example, freshly public Blue Apron has already fallen victim to this perception, with the stock now down about 35% from its IPO price. Today, shares of the meal-kit deliverer are getting crushed on reports that Amazon has filed for a meal kit trademark.

But what about messaging? 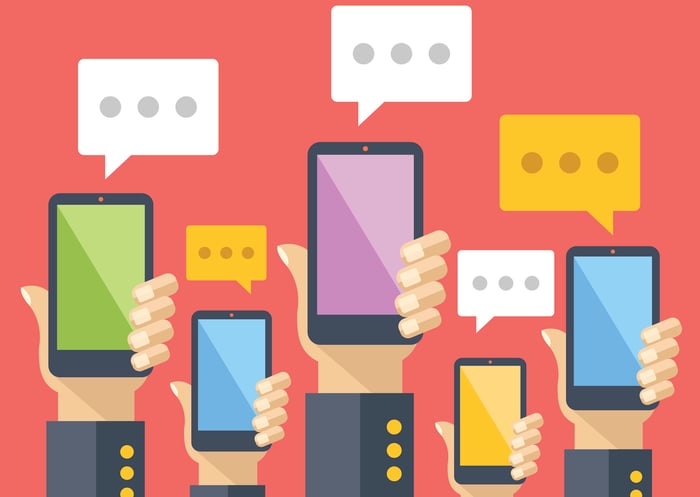 AFTVnews is reporting that Amazon is developing a messaging app called Anytime. The e-commerce giant has reportedly started sending out surveys to customers to gauge interest in specific features. In terms of those features, Amazon ambitiously wants to offer just about everything that existing messaging services offer, all in one place. Anytime might even be comparable to full-blown social networks.

On one hand, you could argue that messaging is a core area that all the other major tech giants have jumped into, so Amazon is just keeping pace with its peers. On the other hand, messaging is already an overcrowded market, with an abundance of apps and services offered by established companies as well as smaller start-ups.

Yes finally somebody is addressing the serious dearth of messaging apps for mobile. https://t.co/Ek2VJNGD6k

It's worth acknowledging where other companies have failed -- perhaps Amazon can learn from these missteps.

Apple (NASDAQ:AAPL) has tried to break into social networking a couple of times, and has failed spectacularly each time. The Mac maker has seemingly accepted this fate, and now leaves social networking to the pros, now integrating various third-party services instead of building its own. However, Apple is making progress with turning iMessage into a platform, adding a dedicated iMessage App Store last year, with P2P payments coming later this year. The company's biggest advantage is that iMessage is the default messaging service in iOS, and as such enjoys deep integrations.

Alphabet (NASDAQ:GOOG) (NASDAQ:GOOGL) subsidiary Google has never had a clear messaging strategy, offering no less than five different apps currently (Allo, Duo, Hangouts, Android Messages, and Voice). There was a sixth, Spaces, that was shut down a couple months ago. Google's internal incubator Area 120 released yet another messaging app, Supersonic, earlier this year that turned text into emojis, which has also been shut down. There's no compelling reason to have so many disparate apps. Each has a different purpose, but some feature overlap is inevitable. The consequence is consumer confusion, diluting each app's branding.

The consumer market doesn't need yet another app

Getting into messaging on the enterprise side is much more promising. Amazon was reportedly considering acquiring Slack, and the company introduced Chime earlier this year, a video conferencing service. Given the sheer dominance of Amazon Web Services (AWS), expanding further into enterprise productivity software makes an awful lot of sense for cross-selling opportunities.

On the consumer side, it's hard to imagine Amazon making a dent in such a crowded space, particularly since it's so late to the game. Besides, no one is asking for yet another mobile messaging app.