Warren Buffett has the ability to buy almost any company he wants, but Berkshire Hathaway's balance sheet means that only big moves really affect the company -- leaving smaller companies behind. We asked three Motley Fool investors to choose a stock they think Buffett would love, but can't buy, and Dave & Buster's (NASDAQ:PLAY), Sodastream (NASDAQ:SODA), and Wynn Resorts (NASDAQ:WYNN) were their picks. 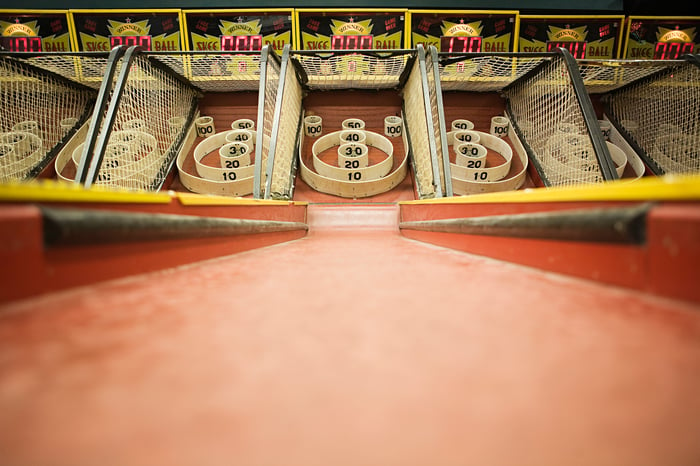 Jeremy Bowman (Dave & Buster's): At a market cap of less than $3 billion, Dave & Buster's (NASDAQ:PLAY) is too small to move the needle for Berkshire Hathaway, but the restaurant/entertainment company possesses many of the qualities Buffett looks for in a stock. First off, Buffett is no stranger to restaurant investments. His company owns Dairy Queen and is an investor in Restaurant Brands International, the parent of Burger King, Tim Horton's, and Popeye's. Berkshire also was a shareholder in McDonald's in the past.

Dave & Buster's, a chain that offers a combination of food, beverages, and games like arcade, bowling, and billiards, is one of the best picks in the sector today. The combination of games and restaurant fare is unique in the industry and gives the company an economic moat, or a sustainable competitive advantage, which is Buffett's most important investment criteria.

During a tough a time for the overall restaurant industry, D&B has continued to post comparable-sales growth and has outperformed the casual-dining sector for 20 quarters in a row. It's also delivered strong profit growth, beating analyst earnings estimates in every quarter since its 2014 IPO.

Amusements provide an economic moat and a higher profit margin, so Dave & Buster's is more profitable than your average restaurant. Finally, the company's ability to drive traffic should make it an ideal tenant for struggling malls, giving it opportunity to expand in the future.

A small company with big potential

Demitri Kalogeropoulos (Sodastream): Sodastream's valuation makes it too small to be a worthwhile position in Buffett's portfolio. Instead, the Oracle of Omaha must stick with beverage giants like Coca-Cola and its almost $189 billion market cap.

Luckily, non-billionaires don't have the same size constraints. Even a "tiny" $4 billion company can make an outsized impact on our portfolios.

That means investors are free to participate in this at-home beverage-machine-maker's remarkable rebound. Following a brutal sales collapse in 2014 and 2015, Sodastream is back to posting solid growth thanks to an aggressive branding pivot that changed its focus to sparkling water from soda. Revenue rose 15% last year and grew 14% in the first quarter of 2017.

Profits are rising at a much faster clip, thanks, in part, to lower costs. Buffett would no doubt find Sodastream's spiking cash flow attractive, in addition to the pricing power demonstrated by the fact that gross profit margin has leaped to over 50% of sales from a low in 2015 of 47%.

Customer loyalty is one of those hard-to-quantify metrics that Buffett frequently highlights, and Sodastream is succeeding in this area. Carbon-dioxide canister-refill sales expanded at the strongest pace in years last quarter, which suggests the company is not only delivering its machines into more households, but also enjoying continued, steady use of its products. That's an encouraging sign heading into what's likely to be a critical sales period for Sodastream over the holiday shopping crush.

A gamble worth taking

Travis Hoium (Wynn Resorts): Warren Buffett has long despised the gambling business. He's called gaming "socially revolting," and doesn't seem to have any interest in buying a stock like Wynn Resorts. And even if he did, he would need to get a gaming license to own more than 10% of the company, which would only be about a $1.3 billion investment -- small potatoes for Buffett.

But just because Buffett can't, or won't, buy shares of Wynn Resorts doesn't mean you can't. The company owns Las Vegas' most profitable resort and, in addition to Wynn Macau on the Macau Peninsula, it recently completed Wynn Palace in the Cotai region of Macau. Together, they generated $427.5 million in adjusted earnings before interest, taxes, depreciation, and amortization (EBITDA) in the first quarter, a proxy for cash flow from the multi-billion dollar resorts the company builds.

When Wynn Palace is fully operational, the company will likely generate between $2.0 billion and $3.0 billion in EBITDA annually, a solid level of cash flow compared to the company's $13.3 billion market cap. On top of the existing resorts, the company is building Wynn Boston Harbor, just north of downtown Boston, and planning an addition to Wynn Resorts where the golf course is currently located.

Steve Wynn has been a giant in gaming for decades. Since Wynn Resorts' IPO, the company has outperformed larger rivals because Wynn takes on less leverage than rivals and focuses on the upper end of the market that's less susceptible to economic downturns. There's no one better to bet on than Steve Wynn in the gaming industry.