The "hype cycle" is something all investors need to be aware of. The process kicks off whenever the media gets overly excited about a new technology or business advancement, which ends up driving stock prices sky-high.

So which stocks might be overhyped right now? We asked that question to a team of investors, and they called out Blue Apron (NYSE:APRN), Activision Blizzard (NASDAQ:ATVI), and Editas Medicine (NASDAQ:EDIT). 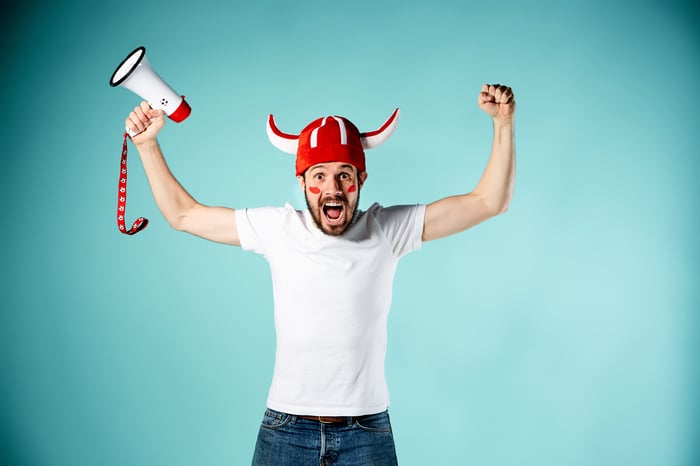 Setting the table for a fall

Rich Duprey (Blue Apron): Once one of the most highly anticipated IPOs of 2017, Blue Apron lost a lot of its luster after Amazon.com (NASDAQ:AMZN) announced it was buying Whole Foods Market (NASDAQ:WFM). The market suddenly believed that the e-commerce king's vaunted delivery capabilities, coupled with the organic produce supermarket's prepared foods, would produce an unrivaled competitor that could sell to nearly tens of millions of Prime members.

Yet there still remains optimism around the meal-kit delivery service, even as the stock has fallen below its offering price. Whole Foods doesn't have a meal-kit service of its own, and there's no guarantee Amazon will succeed even if it does enter this market. It's failed at plenty of businesses it tried its hand at along the way.

Blue Apron does have a large and loyal following, and meal kits are a big hit among millennials, who are into the experience of meal prep. It's part of the reason restaurants are suffering, as food price deflation has made it much more economical to buy the ingredients for a meal than to dine out. Meal-kit delivery services make it even easier.

So should you buy into the potential that, while perhaps not having first-mover status, Blue Apron is an early entrant in the field and has an established, known name? I'd say no. Beyond even Amazon's potential rivalry, there are any number of other meal-kit delivery services out there, all promoting similar benefits, such as convenience and healthfulness. Also, grocery stores themselves, such as Kroger and Publix, are starting their own competing services. In short, the barriers to entry are virtually nonexistent in this business, and competitors are pouring over the ramparts to gain a piece of what is admittedly a growing pie. Blue Apron will undoubtedly get a slice of it, maybe even one of the biggest, but without any real advantages, it's hard to recommend its shares.

Blue Apron's stock has lost a third of its value from its IPO, and that offering price was slashed by a third of what the meal-kit delivery service thought it was going to get. There may be fewer crumbs left for investors when all is said and done.

Demitri Kalogeropoulos (Activision Blizzard): To say there's plenty of optimism on Wall Street around Activision Blizzard's business today would be an understatement. After all, the video-game developer is the third-biggest gainer in the S&P 500 this year, with the stock up over 60% in the past six months.

Sure, there are many legitimate reasons for investors to be excited. The company is growing more profitable thanks to surging digital sales, for one. Its revenue base is also steadier today, thanks to a deeper portfolio of hit franchises and the company's success at transforming its games into properties that gamers play -- and pay for -- all year, rather than only around frenzied annual launch windows.

Activision's other opportunities are harder to quantify. CEO Bobby Kotick and his team believe the esports craze will be a major growth arena over time. Management is exploring ways to generate significant advertising revenue from its gaming content and looking at expanding into the consumer products business as well.

Activision has serious challenges ahead, too, including in monetizing the huge user base it purchased when it bought King Digital without driving hordes of casual gamers away. And while the company is more diverse than it was in 2014, when just three franchises -- Call of Duty, Skylanders, and World of Warcraft -- accounted for 80% of sales, a flop in one of its biggest properties could still sink operating results.

As a long-term shareholder, I'm a believer in the business and not considering selling my shares. That said, if I didn't already own the stock, I'd probably be waiting for a pullback before jumping in amid all the optimism right now.

It's too early to invest in CRISPR

Brian Feroldi (Editas Medicine): The biotechnology sector almost always has a few hype-driven companies that are long on promise but short on profits. Currently, a new technology called CRISPR has taken center stage and has investors feeling downright giddy.

CRISPR is a gene-editing technology that holds the promise of fixing a wide range of diseases at the genetic level. That's a really exciting prospect, since there are around 6,000 known genetic disorders and 95% of them don't have an approved therapeutic option. Since CRISPR could theoretically treat over even cure a number of these diseases, the sky is truly the limit.

Given CRISPR's potential to fundamentally change medicine as we know it, investors have been willing to throw huge amounts of money at companies that are working on this technology. Consider Editas Medicine. The company already holds more than $351 million in cash on its books and has a market cap north of $700 million. Those are amazing numbers for a company that was just founded in 2013. What's more, Editas is so young that it doesn't even expect to file an initial new drug (IND) application with the FDA until the middle of 2018. That means investors will have a lot of waiting to do before they even get a look at how well this technology works in humans.

While I'm rooting for CRISPR to be the game-changing medical breakthrough that we all hope it is, I can't help feeling that investors are way too excited about this brand-new technology. I'll be keeping my capital far away from Editas Medicine for the time being and would suggest you do the same.

Should You Buy Into the Hype Surrounding These Stocks? @themotleyfool #stocks $ATVI $EDIT $APRN $AMZN $KR $WFM Next Article
Current