The value proposition just isn't there.

As far as initial public offerings go, something close to the worst-case scenario is playing out for meal-kit delivery company Blue Apron (APRN 2.07%). Originally expected to price its shares between $15 and $17, the company ended up pricing them at just $10, with the blockbuster news that Amazon (AMZN 0.11%) had agreed to acquire Whole Foods Market likely playing a role in that decision.

Blue Apron stock has been trending downward since its first day of trading, with investors worried about elevated customer turnover, exploding marketing costs, and competition. On Monday, news broke that Amazon had filed a trademark application for its own meal-kit service. Shares of Blue Apron shed another 10% on that revelation, trading around $6.60 at midday. 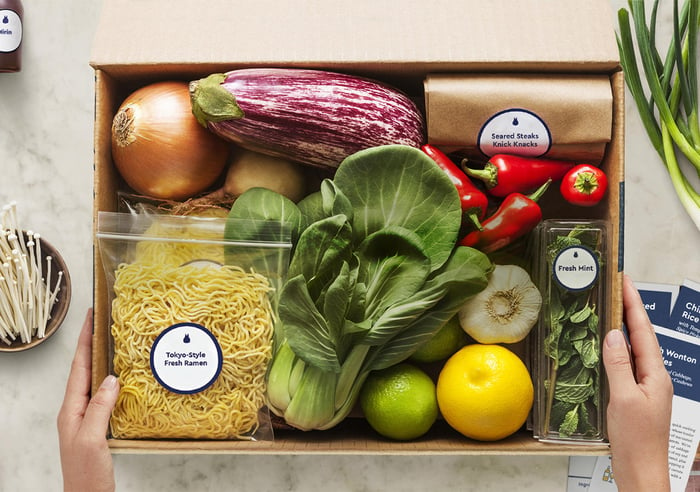 Investors are right to be concerned about all those things, particularly Amazon entering the meal-kit business. But Blue Apron's biggest problem, and the biggest problem for the meal-kit industry in general, is pricing. These services are far more expensive than grocery shopping, despite marketing that says otherwise, and per-serving prices are in the same ballpark as a typical meal at a fast-casual restaurant. You're paying restaurant prices, but you still have to cook. It's the worst of both worlds.

Blue Apron is among the least expensive meal-kit services, with its per-serving prices ranging from $8.99 to $9.99. But even with lower prices than its competitors, Blue Apron is far from a good value compared to the grocery store.

In a 2014 blog post, Blue Apron made a bold claim about its value proposition. After tallying ingredient costs at stores in various cities, the company concluded that shopping at the grocery store was 60% more expensive on average than its service.

Blue Apron's marketing no longer emphasizes value as much as it used to, but the company still touts value as a key selling point. In its IPO filing, the company said: "We believe that our meals offer compelling value when compared to purchasing similar ingredients at grocery stores in the amounts necessary to recreate a given week's menu after taking into account costs related to delivery and food waste."

I don't need to add up ingredient costs to know that these claims are bunk, or at the very least misleading, and neither does anyone who cooks at home even semi-regularly. Blue Apron's family plan, meant for a family of four and priced at $8.99 per serving, costs $36 per meal. If a family of four paid that much for every dinner for one year, it would cost about $13,125.

Here's why that's a completely unreasonable number. The U.S. Department of Agriculture publishes data each month on the cost of food at home. The agency estimates how much people and families spend on groceries under four different meal plans, with the constraint that all food is prepared at home. The costliest plan is the "liberal plan," representing those in the upper quartile of food spending.

A family of four, consisting of two adults and two children, is expected to spend $1,284.60 on food each month under the liberal plan, or about $15,415 each year, according to the latest data. Under the moderate-cost meal plan, the second-costliest plan, annual spending falls to $12,678.

Put into the right context, Blue Apron's pricing is nuts. A family of four spending $8.99 per serving for dinner for a year would nearly exhaust its entire annual food budget under the liberal plan on one meal per day, and would more than exhaust it under the moderate-cost plan. If a family of four paid $8.99 per serving for three meals a day, total annual food spending would be nearly $40,000.

In other words, there is no value proposition. As a grocery replacement, Blue Apron adds a lot of cost. And with no shortage of inexpensive grocery delivery and pickup services, offered by start-ups like Instacart as well as grocers like Kroger and Wal-Mart, there are far less expensive ways to save a trip to the store.

The high cost of meal-kit services puts a hard limit on the potential size of the market. Amazon, if it does launch a competing service, will likely try to undercut Blue Apron on price, as will any supermarket chain that enters the fray. Blue Apron isn't profitable now, despite charging an arm and a leg for groceries. With increased competition sure to pressure its pricing, I'm having trouble seeing a path to profitability.