Skyworks Solutions (NASDAQ:SWKS) and Texas Instruments (NASDAQ:TXN) both sell analog and embedded chips to a wide range of industries. Both chipmakers are also prominent Apple (NASDAQ:AAPL) suppliers, and both were lifted by the industrywide rally in semiconductors over the past year.

Skyworks rallied more than 50% over the past 12 months, while TI jumped more than 25%. But the companies are fundamentally different -- Skyworks is a smaller chipmaker that is more heavily exposed to Apple, while TI is a bigger chipmaker with a more diversified business. Let's examine both stocks to see which is the better long-term buy at current prices. 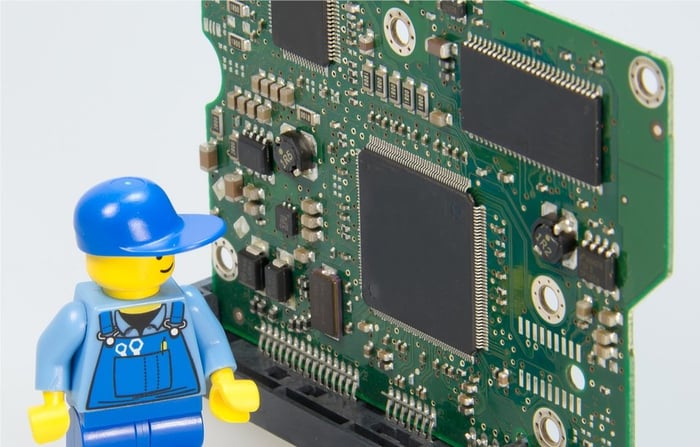 Skyworks sells power amplifiers, front-end modules, RF chips, and other components to a wide variety of customers, but its top customer is Apple -- which contributed 40% of its revenues last year. That exposure is a double-edged sword -- it makes Skyworks one of the best supply chain plays on the iPhone, but its fortunes could fade as iPhone sales peak.

Skyworks doesn't regularly break down its sales by industry, but it believes that content share gains in other phones, along with the growth of other connected devices across the Internet of Things (IoT) market, should gradually reduce its dependence on the iPhone.

Texas Instruments sells analog and embedded chips for the industrial, automotive, personal electronics, communication equipment, and enterprise systems markets. Orders from Apple generated less than 10% of TI's revenue in 2016, compared to 11% in 2015.

Much of TI's recent growth comes from the automotive and industrial markets, which respectively accounted for 18% and 33% of TI's top line last year. That growth is offsetting declines at its personal electronics and enterprise systems, as well as its slower growth in communication equipment.

Skyworks' revenue rose just 1% to $3.3 billion last year, mainly due to an 8% decline in iPhone shipments in 2016. Its non-GAAP earnings rose 6%. But looking ahead, analysts expect Skyworks' revenue and earnings to respectively rise 10% and 13%.

That growth is attributed to improving iPhone shipments, its content share gains in Huawei and Samsung (NASDAQOTH: SSNLF) devices, and its expansion into adjacent markets. The growing use of IoT devices like smart speakers, home automation devices, and wearables should also boost market demand for Skyworks' chips.

As for gross margins, TI easily wins that battle. That's because TI's shift to a newer 300-mm manufacturing process reduced its production costs by about 40%. Skyworks is faring well with its bundling and content share strategies, but it simply can't match TI's market-leading margins. 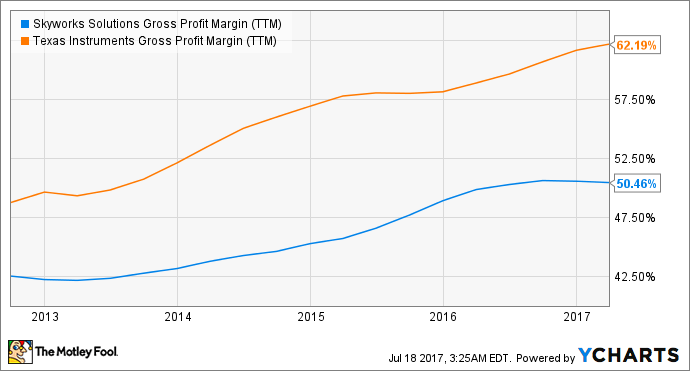 Skyworks is a slightly cheaper stock, but I personally prefer TI at current prices. TI has a well-diversified business model which won't tank if the new iPhone bombs, it has solid exposure to the growing automotive and industrial IoT markets, and it pays a higher dividend. Skyworks' future looks promising, but it's a much riskier play than TI.