It's still early, but Intuitive Surgical (NASDAQ:ISRG) stock could be on track to turn in its best performance of this decade. Shares of the robotic surgical systems company are up nearly 50% so far in 2017, well above the end-of-year gains for all but one year since 2010.

Robots are all the rage these days, although Intuitive Surgical's da Vinci surgical system might not meet the purists' definition of robot. But public interest in robots doesn't fully explain why Intuitive Surgical stock has taken off this year. The following three charts, though, tell the story of the company's current -- and potentially future -- success. 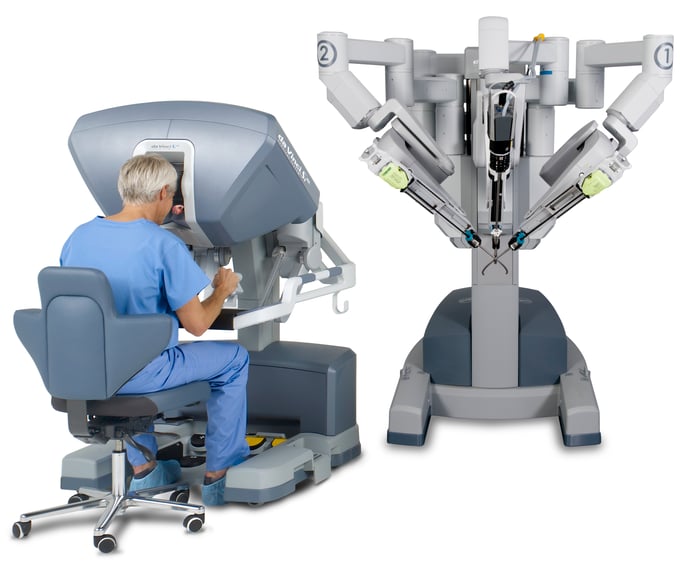 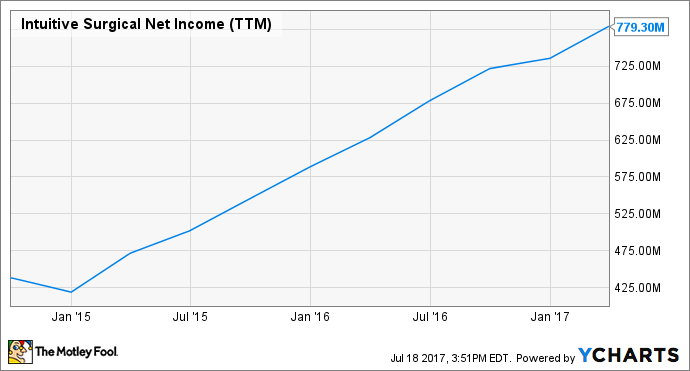 It's important to note that the company's sales have also grown during the last three years thanks to increasingly more procedures performed by da Vinci systems, but not nearly as much as earnings have. There are two key reasons for this. First, Intuitive Surgical's gross profit has improved because revenue outgrowth outpaced the cost of that revenue. Second, the company has done a great job at keeping selling, general, and administrative expenses under control.

A great business is one that can count on money coming in the door year in and year out. That's the scenario for Intuitive Surgical. Roughly 71% of the company's revenue last year was from recurring sources. 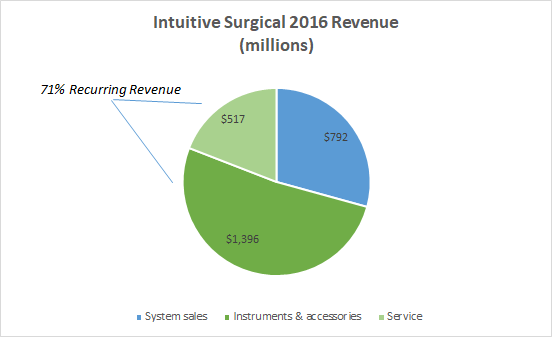 The company's recurring revenue rate in the first quarter of 2017 was even better -- 77%. As the da Vinci install base grows, so do sales of instruments and accessories and service contracts.

Intuitive Surgical continues to experience most of its procedure volume growth from the U.S.; gynecology (particularly hysterectomies), general surgery, and urology are the company's focus areas. However, there could be plenty of room for growth. Intuitive Surgical doesn't currently address many of the top surgical procedures with da Vinci. Others, including Mazor Robotics (NASDAQ:MZOR), target some of the types of procedures that da Vinci doesn't, such as spine and brain procedures.

So far, Intuitive Surgical has talked mainly about improving its technology in its core markets. And there are significant opportunities to grow market share in those areas -- especially with international growth. At some point, though, the company could eye some of the procedures that aren't currently at the top of its list.

It could look to develop its own capabilities. Perhaps an easier path would be to acquire a smaller company. Buying Mazor would be less likely because of its relationship with Medtronic (NYSE:MDT). However, Globus Medical (NYSE:GMED), which also is focused on developing robotic surgical systems for spine surgeries, could be a possibility down the road.

Intuitive Surgical has a lot of things going for it. However, there are some risks investors should note. Potential competition from other major players is one threat. Medtronic, for example, plans to launch its own robotic surgical system in 2018 that will target some of the same procedures that da Vinci currently performs.

Perhaps the more immediate risk is that the stock is priced to perfection. Intuitive Surgical shares currently trade at nearly 35 times expected earnings. Any bump in the road for the company will probably feel like a crater to shareholders. Still, though, with the long-term growth prospects ahead of Intuitive Surgical, I suspect this stock will enjoy plenty more good years ahead.