Investors are walking on eggshells ahead of Cal-Maine Foods (CALM -0.11%) earnings report next week. It's expected to give an indication of just how low the egg industry has fallen. With its stock at levels not seen in three years, the fiscal 2017 fourth-quarter financial report will determine whether shares are scrambled further.

A quick trip to the grocery store will tell you why: Eggs are cheap. Really cheap. Although the U.S. Agriculture Dept. says prices have risen a few cents per dozen in recent weeks, their cost is still significantly depressed, with the Bureau of Labor Statistics putting the average grocery store price at $1.33 per dozen in June, the lowest level for the month since 2006 and only a penny higher than the nadir hit last November. 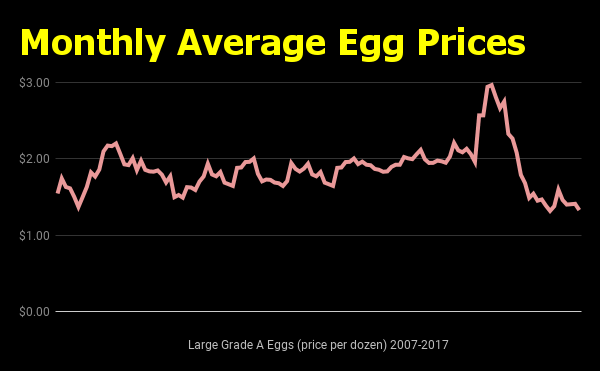 But that's the average. In some regional markets like the Southeast, the industry's Urner Barry price index showed large eggs falling as low as $0.86 per dozen earlier this year.

The problem, of course, is the aftereffects of the avian flu outbreak in 2015 that devastated flocks of hen layers. The influenza virus is highly contagious and can cause entire flocks to become infected very quickly. The 2014-2015 outbreak of the H5N2 virus led to the slaughter of over 40 million birds, some 12% of the national laying flock.

The loss of so many birds savaged huge swaths of the country's egg inventory and prices soared. BLS data shows the average price of a dozen eggs peaked at almost $3 in September 2015, but what surprised many was how rapidly the industry bounced back. The USDA reported flock sizes were quickly repopulated to near pre-outbreak levels, but unfortunately demand did not return with it and egg prices were pummeled. An outbreak again this past spring had producers worried it would be deja vu all over again, but this time it was quickly contained. 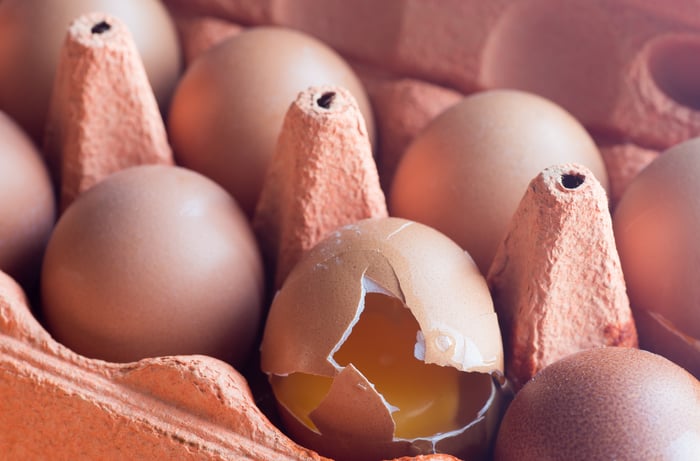 Still, it's a problem for Cal-Maine, the country's largest egg producer, along with other farmers. Cal-Maine admits its operating results are significantly affected by the fluctuations that go on in the wholesale shell egg market, over which it has no control. Even small increases in production or decreases in demand can have a large adverse effect on shell egg prices. The impact was evident when Cal-Maine was forced to suspend its quarterly dividend payment after recording larger-than-expected fiscal first-quarter losses last September.

While the situation hasn't improved in the two years following the end of the virus outbreak, CEO Adolphus Baker is hopeful the tide will turn. Bloomberg reports he noted at an analyst conference last month that the egg industry goes through boom and bust cycles periodically, and while "high prices cure high prices" because farmers increase their flock sizes, "low prices also cure low prices" as farmers reduce them.

However, it might not be so easy this time. Egg producers remain under pressure to increase their cage-free flocks, with companies like McDonald's (MCD 2.14%) pledging to go cage-free at its 16,000 restaurants within 10 years, and Taco Bell has already completed the task. And after McDonald's made its pledge, around 200 other companies followed suit, including Starbucks, PepsiCo, and Wal-Mart (WMT 0.11%).

What that means is where farmers would normally be reducing their flock sizes because of the depressed pricing environment, they're having to increase flock sizes of cage-free birds. Worse, consumers aren't interested in cage-free eggs. The CEO of the egg industry's lobbying group told BuzzFeed News, "90% of consumers stand in front of the egg case, and they pick conventional caged eggs because they're economical." 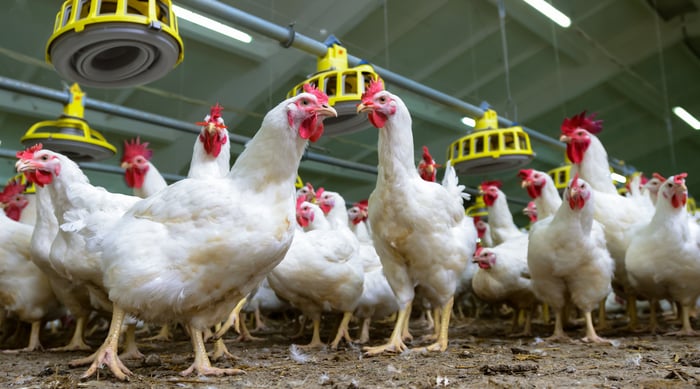 The move to cage-free eggs allows corporations to virtue signal how good they are, but conditions aren't really all that much better for the chickens, and consumers are still buying based on price -- leaving producers like Cal-Maine Foods caught in the middle. Wal-Mart accounts for 29% of total sales, making it all the more difficult for Cal-Maine.

Don't expect Cal-Maine Foods to crow about a dramatic U-turn in its prospects in its coming earnings report. Despite the stock being down 20% so far this year, investors might not be clucking for long about its poor performance.