Things didn't start out so great when DuPont (NYSE:DD) decided to let certain specialty chemical manufacturing operations fly under their own flag as Chemours Co. (NYSE:CC) in mid-2015. The stock debuted near $20 per share, but within months was under $5 per share.

Yet, roughly 18 months after setting all-time lows, Chemours Co. stock is trading near all-time highs of about $45 per share -- and for good reason. With one huge cloud of uncertainty seemingly removed and growth returning to its largest business segment, should investors consider buying the stock at the high? 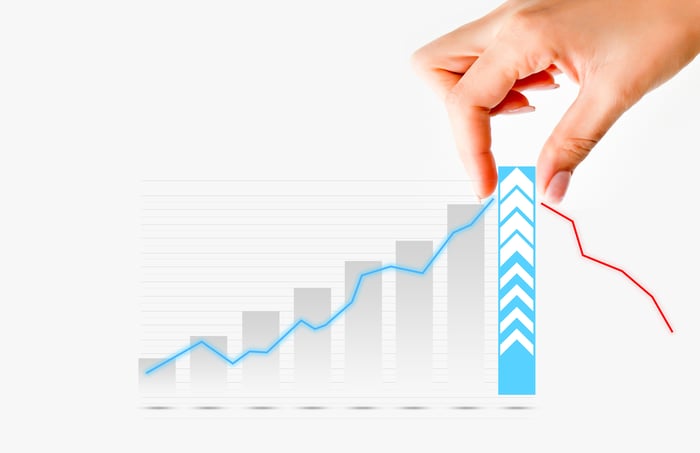 The case for buying

Stocks that rise 800% in 18 months usually do so for one of two reasons: 1. wild speculation, or 2. real-world catalysts. Luckily for shareholders of Chemours, the latter seems to have been a more dominant driving force since early 2016.

What happened? The stock gradually climbed closer to its IPO price throughout 2016 until the U.S. presidential election in November. The surprise result boosted shares for the simple reason that the biggest obstacle and source of uncertainty facing Chemours Co. was a class action lawsuit over toxic pollutants it dumped into waterways while manufacturing certain fluoropolymer products (such as Teflon) when it was still DuPont.

Simply put, Wall Street figured a deregulation-friendly administration sounded better than any alternative. The good news is it never came to that, as the case was settled for $670 million in early 2017. The better news is DuPont agreed to split the liability after long contesting it was up to Chemours Co. to figure out a solution.

That single event removed any and all reservations Wall Street had about the stock, which has been setting new all-time highs with regularity this year. 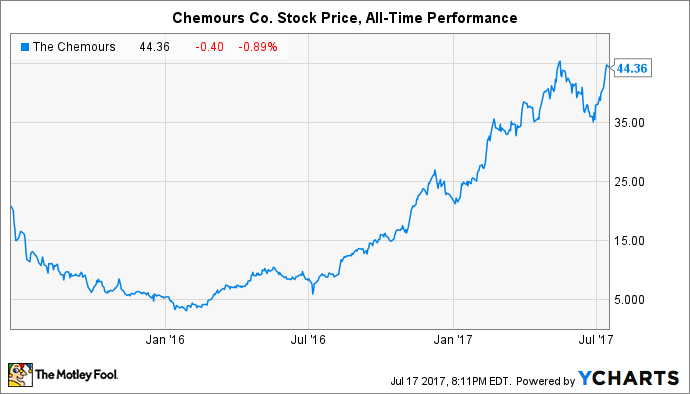 To be fair, the optimism has gotten a little out of hand measured purely on the performance of the past 12 months. The stock now trades at a 79 times trailing earnings and 23 times book value (more on that below). However, the optimism is representative of where Wall Street analysts see the business heading. Chemours Co. stock is trading at just 11.2 times earnings expectations for the next 12 months.

The latter valuation looks much more palatable and more in line with other chemical manufacturing stocks, but is it supported by growth in the business? Judging by performance in the first quarter of 2017, analysts may be onto something.

All three of the company's business segments are returning to healthy profitability, while the two largest -- titanium technologies and fluoroproducts -- are doing particularly well on the income statement. Things may just be getting started.

Chemours Co. is well-positioned to ride a price recovery that has been years in the making for titanium dioxide pigments, for which it's the largest global producer at 1.25 million metric tons of annual production capacity. Selling prices suffered mightily in the years leading up to and immediately following its launch as a separate entity from DuPont. The weakness no doubt made it easier for the parent company to kick it from the nest in mid-2015, but the spinoff may get the last laugh.

Much of the company's deterioration in revenue and profitability in recent years was caused by the downturn in titanium dioxide markets. In 2013, Chemours Co. notched $6.8 billion in revenue and net income of $423 million. By last year, those two numbers had fallen to $5.4 billion and $7 million, respectively. It wouldn't be unrealistic to expect a return to historical levels of revenue within the next few years. Net income is actually on pace this year to exceed the total from 2013.

Long story short, the removal of legal uncertainty and a rebound in the company's bread-and-butter business segment makes it a buy at current prices. But we haven't discussed the red flags yet.

The case against buying 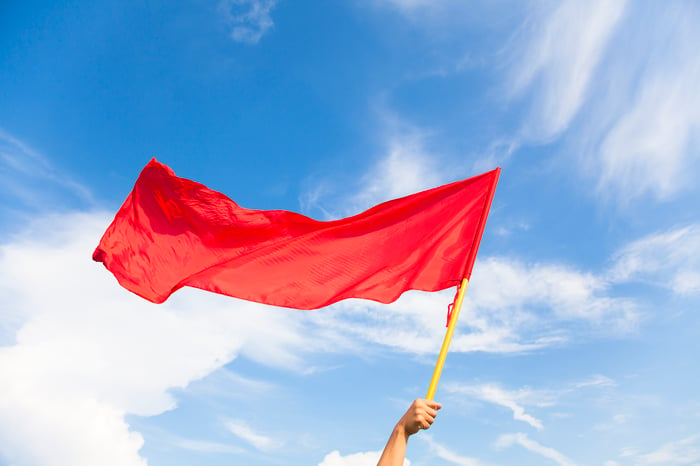 When DuPont spun off Chemours Co. in 2015, the intention was pretty clear -- even though it went unstated. It provided DuPont an opportunity to rid itself of legal headaches caused by its fluoropolymer business and clean up its own balance sheet ahead of the potential megamerger with Dow Chemical.

While investors cheered the legal settlement announced earlier this year, it only covered dumping of the processing aid known as PFOA from one fluoropolymer manufacturing facility. Chemours Co. owns eight such facilities in the United States and 10 more globally. It might have ceased using the toxic product in question years ago, but it still persists in local waterways near existing facilities. The liability remains very real.

Worse, the liability could extend to the new processing aid, called GenX, that replaced PFOA at its global fluoropolymer manufacturing sites. GenX has drawn scrutiny from local officials, the U.S. Environmental Protection Agency, and even international treaties. Just weeks ago Chemours Co. announced publicly that it will stop dumping the new processing aid into waterways, but as long as it persists in the environment, the potential legal liability remains.

The other red flag for investors to consider is easier to understand: DuPont saddled Chemours Co. with a debt pile totaling $3.9 billion. It's a large reason why the company trades at such a high premium to book value. 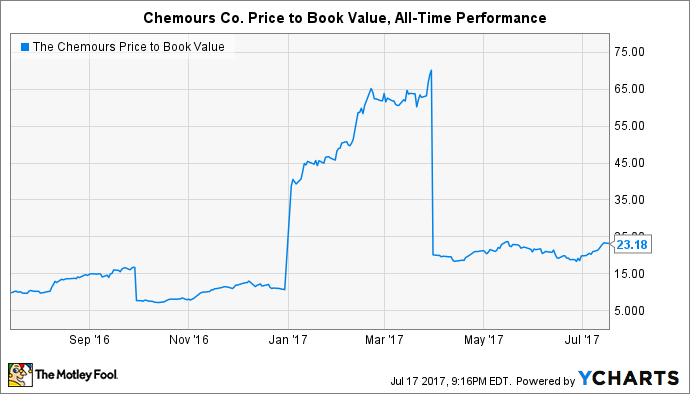 While management whittled that down to $3.5 billion at the end of March 2017, it still sapped profitability by committing the company to pay $217 million in interest expenses last year. There's no easy way out from under the debt pile, which means the balance sheet could hold the stock back from going too much higher in the near future without more attention from management.

Should you buy at the high?

The catalysts supporting growth in the near and medium term are real and should not be overlooked. However, neither can the potential for sizable legal risks from its legacy and ongoing fluoropolymer operations. I won't buy Chemours Co. stock for that reason -- in addition to moral concerns about dumping known toxic substances in the first place -- and your portfolio probably doesn't need that much uncertainty, either. I don't think investors should considering buying the stock at the high.