Less than three weeks after Blue Apron Holdings Inc. (NYSE:APRN) debuted on the public markets on June 29, Amazon.com (NASDAQ:AMZN) stunned the meal-kit company's new investors by filing a patent for its own meal-kit business. This week, multiple news outlets reported that the online juggernaut has already started selling its meal kits in the U.S.

Dread of Amazon had already sliced Blue Apron's pricing in half during the run-up to its initial public offering, which coincided with Amazon's announcement of its pending acquisition of Whole Foods Market (NASDAQ:WFM). 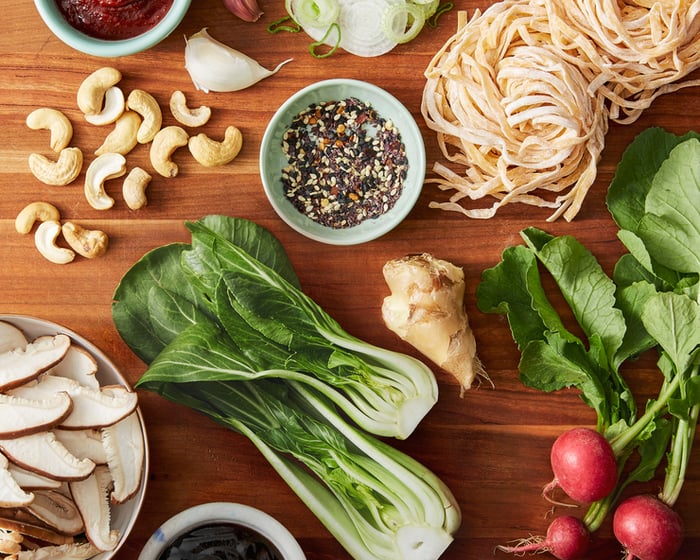 Blue Apron stock now sits at 35% below its IPO pricing, its trajectory as wilted as a bunch of cilantro forgotten for weeks in the far reaches of a refrigerator.

Those with a contrarian streak may be tempted to cherry-pick shares while shareholder fear of the ruthless Amazon empire is (arguably) at its height. And when a stock falls so quickly after its introduction to the markets, it never hurts to probe for a value thesis that others may be ignoring.

But there's no value thesis here, and in fact, the primary reason to avoid Blue Apron shares in the near term existed before Amazon's meal-kit ambitions came to light, and even before the Amazon merger with Whole Foods was announced.

Always check out this section in an IPO filing

One of the most important parts of an "S-1" registration with the U.S. Securities and Exchange Commission -- the informational document which introduces potential investors to a company during its pre-IPO stage -- is the "Use of Proceeds" section.

In its own S-1, Blue Apron stated: "We intend to use the net proceeds of this offering for working capital, capital expenditures and general corporate purposes."

Now, the company's financials revealed negative working capital of $23.6 million at the end of the first quarter of 2017. Blue Apron's own estimate on the same date is negative $84.8 million, but it needlessly excludes cash from its own definition.

And the pressures on working capital were (and are) only building. In the first quarter of 2017, Blue Apron's negative operating cash flow of $19.0 million has nearly reached the full-year operating cash deficits of 2015 (negative $26.4 million) and 2016 (negative $23.5 million).

The first-quarter cash burn would have been much worse, but, perhaps in preparation for its presentation to investors, Blue Apron allowed its accounts payable to mushroom by nearly 57% between the end of 2016 and the first quarter of 2017. Thus, payables to vendors jumped $28.1 million to $77.7 million in the three months between Dec. 31 and March 31.

So, between replenishing working capital, plugging a growing quarterly cash deficit, and investing in fulfillment centers needed to service expanding sales (which ate up another $54 million in Q1 2017 alone), Blue Apron wasn't poised to get any tangible benefit out of its IPO proceeds of nearly $300 million.

A most unappealing chart

In its S-1 statement, the company also provided a visual cue that should have cautioned investors. In a subscription-based service business, the ideal formula for increasing revenue is to scale both customers and the amount they purchase each month. Here's an interesting slide provided by Blue Apron on its cumulative customer spend: 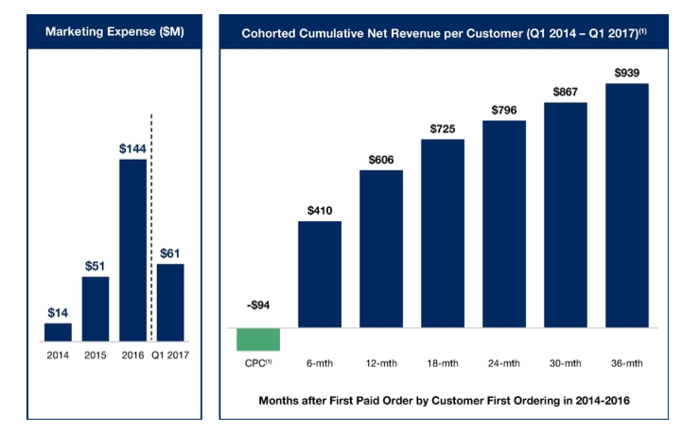 Let's address the panel on the right first. A casual glance might imply that revenue per customer is on the march, since cumulative average net revenue is expanding steadily.

But each column represents a separate customer cohort between the years 2014 and 2016. So the first column shows the average of all customers' cumulative orders after they've subscribed for at least six months, and so on.

Served up this way, it's surprising that as your eyes move from left to right, the bars aren't creating a steeper trend line. If customers continued to order with their initial frequency of the first six months, you'd expect the 12-month column to show a cumulative spend of over $800 per customer, not $606.

And, as time goes on, the average spend per customer really drops off. Calculating monthly totals from these numbers, ordering drops from an initial $68 per month in the first six months, to a monthly outlay of $26 per customer (in year three).

This trend looks worse considering the panel on the left, which shows a wide jump in marketing expenditures beginning in 2016, and continuing into the current year. Blue Apron's marketing expense in the first quarter of 2017 is already roughly 42% of last year's entire budget.

Thus, not only is the organization draining cash, but its marketing efforts -- so far -- haven't solved its long-term customer frequency issue.

Summing up the meal

A much higher IPO raise, coupled with a strategic plan to boost long-term customer spending, might have provided investors with a rationale to start wading in after Blue Apron's initial public ostracism.

But the company has simply taken investors' funds to patch up its cash difficulties, and $300 million won't plug its leaks for long. Better to watch this one for a couple of quarters before investing, and don't be surprised if management announces a dilutive follow-on stock offering at some point next year. For now, don't try to catch a falling apron.