Please ensure Javascript is enabled for purposes of website accessibility
Log In Help Join The Motley Fool
Free Article Join Over 1 Million Premium Members And Get More In-Depth Stock Guidance and Research
By Palbir Nijjar - Jul 20, 2017 at 9:42AM

It may be an opportune time to pick up shares in the beaten-down underwear maker.

Hanesbrands Inc. (HBI 4.29%), manufacturer and marketer of popular apparel brands such as Hanes, Champion, and Playtex, has been on a bit of a roller-coaster ride the last couple of years. Its stock price has increased about 20% since reaching its 52-week low just over five months ago. Yet it still has a way to go to recover from its all-time highs set in April 2015. Hanesbrands stock is down 34% from its peak levels. When a company with well-known brands like Hanesbrands gets whacked, it's worth evaluating whether the market is presenting investors with an opportunity. Let's take a closer look to see if that's the case with Hanesbrands. 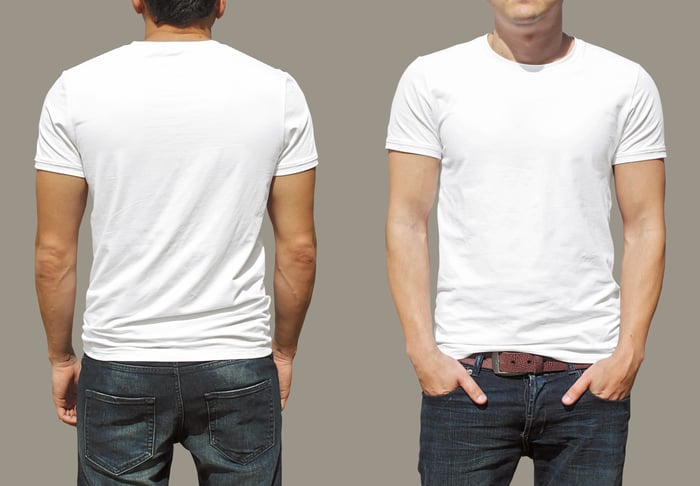 The simplest and most straightforward measure of value is the price-to-earnings (P/E) ratio, which measures a company's share price relative to its earnings per share. With Hanesbrands stock trading at 16.5 times its trailing-12-month earnings, the stock of this underwear maker appears to be a bargain. According to data from S&P, the average P/E ratio of Hanesbrands over the last five years is 22.6.

Not only is Hanesbrands trading below historical levels, it's also priced cheaper than the S&P 500, which is currently trading at almost 26 times trailing-12-month earnings. Given that Hanesbrands has grown earnings 15.8% over the last five years and expects to deliver 10.4% long-term earnings growth going forward, investors should expect Hanesbrands to be priced at a premium to the market. Unfortunately for current Hanesbrands investors, that is not the case, and part of the reason is pessimism currently displayed toward the industry. The SPDR S&P Retail ETF (XRT 4.21%), which includes apparel retail, is trailing the market significantly, lagging by over 20% in the last year.

Another iteration of the P/E ratio is to compare the price relative to forecast earnings rather than the past year. The forward P/E ratio can be a slightly more accurate measure of valuation, but is also more subjective, as the next year of earnings for a company is unknown. Nevertheless, the market appears to be even more despondent toward Hanesbrands. As shown in the table below, Hanesbrands trades at just 10.8 times forward earnings, well less some of its peers in the industry, many of which have much lower growth prospects.

Signs of a trap

The P/E ratio is a starting point to valuing a company, but it is far from perfect. For example, earnings can be manipulated or based on subjective assumptions by the management team. Another method is to examine the price-to-sales (P/S) ratio, which looks at the price of a company's shares relative to its revenue. When running a comparative analysis using this metric, it tells a different story. Compared to the same competitors presented above, Hanesbrands is only cheaper relative to VF, which owns the rights to popular brands The North Face, Timberland, and Wrangler.

A much bigger concern is its debt level. Hanebrands' debt levels have steadily increased over the last few years, peaking at a debt-to-equity ratio of 432% in its most recent quarter.

Moody's current debt rating on Hanesbrands is Ba1, the highest rating assigned to non-investment grade (or junk status) bonds. The company doesn't appear to be in immediate threat of default, as its interest coverage ratio -- the amount of times its earnings cover its interest expense -- is just under 6.

Management doesn't appear to be too concerned about its debt levels, either. Despite its debt, the company raised its dividend 36% in the first quarter of this year. Hanesbrands now pays 43% of its earnings as a dividend, yielding 2.6% to investors. However, investors should be wary. If the company comes under pressure, both the dividend and its ability to service its huge debt pile could be jeopardized.

Strength of its brand

A part of Hanesbrands' appeal at this price point is the strength of its brand. According to Hanesbrands, it holds the No. 1 or No. 2 market position in either underwear, intimates, hosiery, or activewear in 12 countries. Additionally, as an underwear brand, Hanesbrands products are more resistant to three of the biggest threats to the apparel business: a recession, going out of fashion, and Amazon.

Competitive pressures in the retail and apparel industry combined with heavy debt levels have put a damper on Hanesbrands stock. However, if the company can continue to service its debt while growing its revenue and profits, Hanesbrands could turn out to be a tremendous value.