Which move was the right one? The answer lies in the stock's valuation.

It was kind of a one-step-back, two-steps-forward quarter for Lockheed Martin (LMT 0.11%).

Shares of the world's largest pure-play defense stock fell a fraction of a percent after it reported earnings Tuesday, then gained that fraction back, and added another fraction of a percent Wednesday. That waffling reaction to earnings is not how you'd ordinarily expect investors to greet the news that Lockheed beat analysts' expectations for both sales and earnings. But the numbers were what they were -- and investors were apparently less than impressed by what Lockheed had to tell them this week. 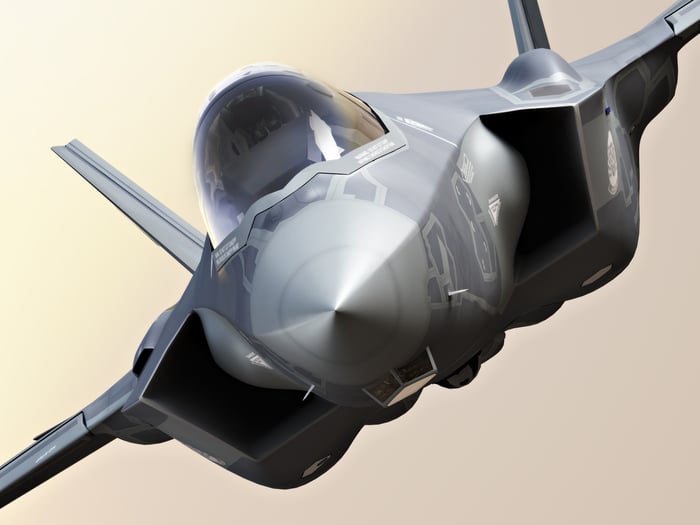 Even better, Lockheed Martin incorporated the better-than-expected Q2 results, then added to them, in crafting new-and-improved guidance for full-year profits. After earning $0.12 more than it expected in Q2, Lockheed now believes that it can end the year with earnings of between $12.30 and $12.60 per share -- about $0.15 more than it was expecting to earn.

Good as those numbers look, though, Lockheed's results were both worse and better than those headline numbers suggest.

On the worse side of things: earnings from discontinued operations, which boosted last year's Q2 results but were absent from Tuesday's news. Their absence resulted in net diluted earnings per share declining about 3% year over year. (The fact that net income declined, despite sales growing, may account for some hesitancy on investors' part to buy into Lockheed despite the earnings beat.)

On the plus side, Lockheed Martin reported generating $1.5 billion in cash from operations last quarter. That was up only 5% from last year. But after subtracting $278 million in capital expenditures, it left Lockheed with $1.3 billion in free cash flow for the quarter -- 34% ahead of reported net earnings.

Mind you, there's still a pretty big gap between Lockheed's earnings as calculated according to generally accepted accounting principles and the actual cash profit the company is generating and putting in the bank. But thanks to Q2's strong result, Lockheed Martin closed the gap between its GAAP net income for the past 12 months ($5.1 billion) and its actual cash profits ($4.1 billion) a little bit tighter.

All that said, with its valuation of 20.5 times free cash flow (16.5 times GAAP earnings), I still can't say that Lockheed Martin stock looks like much of a bargain to me today. Although the stock pays an above-market 2.5% dividend yield, with prices falling on the company's marquee F-35 stealth fighter jet, analysts only expect Lockheed Martin to average 9.2% profit growth over the next five years. Combining dividend yield with earnings growth, that results in an expected total return of only 11.7% on the stock.

So why is Lockheed Martin stock not reacting as expected to this week's earnings beat? Personally, I think paying 20.5 times FCF for an 11.7% return is a bad bargain. Could be, other investors are starting to agree.