Autoliv (NYSE:ALV) didn't like what it spied on the horizon when it reported first-quarter results a few months ago. At that time, CEO Jan Carlson stated that the company saw "some uncertainties relating to light vehicle production growth, including high inventory levels and slower sales momentum, especially in North America and China." Those worrisome trends for slowing light vehicle production didn't go away during the second quarter, causing Autoliv's results to come in below expectations. Furthermore, the company anticipates that those headwinds will persist during the third quarter, which led it to reduce its full-year organic sales growth guidance. 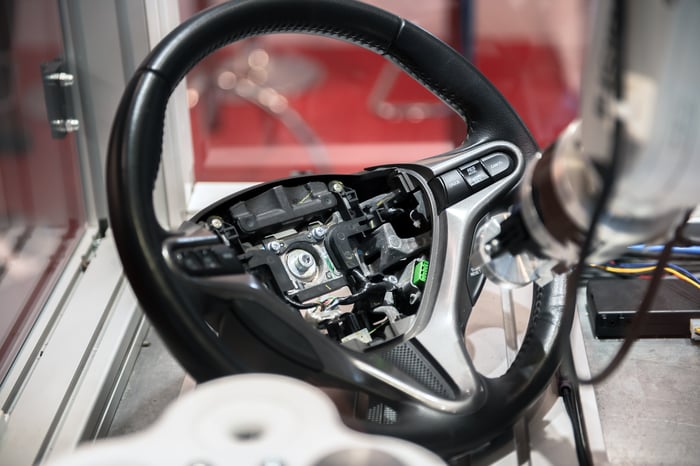 Autoliv CEO Jan Carlson commented on what drove its results during the second quarter:

I am pleased that we continue to execute well in Passive Safety and that proactive adjustments to a weaker market in China and North America helped the segment generate another quarter of double digit operating margin, despite continued elevated investments for growth. We managed another quarter with good operating efficiency, and our strong gross margin performance enabled us to meet our adjusted operating margin expectation although the organic sales growth was slightly below our expectation due to lower light vehicle production in China and North America. Order intake continued on a high level in Passive Safety in the quarter.

As Carlson points out, the company operated well in a less-than-ideal environment. Automakers had hoped that their strong sales momentum from last year would continue in 2017, but that hasn't been the case. GM (NYSE:GM), for example, recently reduced its forecast for 2017 U.S. vehicle sales. The U.S. automaker now foresees sales in the low 17 million range, down from an initial expectation that sales would match last year's peak of 17.55 million. One of the culprits is a glut of cars on the market, which is causing GM to slow production.

Autoliv expects higher light-vehicle inventory in the U.S. and elsewhere as well as slow sales momentum and uncertainty in China and North America to continue to impact its sales in the near term. Because of that, the company only expects organic sales growth in the range of 0% to 2% during the third quarter with an operating margin in the 7.5% to 8% range.

Given the weakness in the second quarter and the outlook for the third, Autoliv is reducing its full-year expectations. The company now sees organic sales growth of around 2% for the full year, down from its initial expectation of a 4% increase. That said, the company does still expect its operating margin to be around 8.5% for the year.